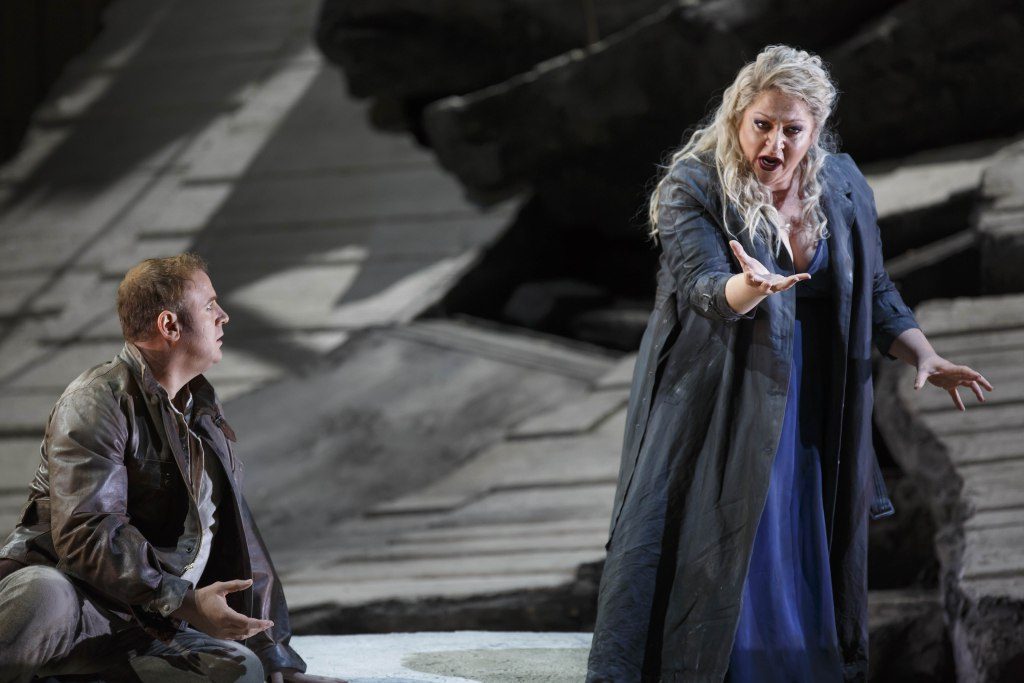 In a brash and cinematic siege of our city, Hector Berlioz’s epic tale of Greeks, Trojans and Carthaginians loving, living and dying in the shadow of an inevitable Rome is being given a new, transcendent production at Lyric Opera.

Tobias Hoheisel’s stentorian stone set, which exudes power in wholeness and desolation in wreckage, and his wardrobes, which straddle the ages from the ancient to today, drive director Tim Albery’s consuming telling of the depths and glories of Virgil’s “Aeneid” stories. All of the singers are at a perfect point in their careers where carefully planned fate has given them the chance to sing this rarely heard music. Under Albery’s direction, the characterizations are grounded in grandiose truth: From bass-baritone David Govertsen’s stately, tottering Priam to baritone Lucas Meachem’s love-struck warrior Chorebus. Berlioz’s lovechild opera is given its rightful due here, perhaps as never before.

Soprano Christine Goerke conquered the seer Cassandra’s sweeping, sobbing, searing vocal challenges with munificence. She vocally and histrionically lives the inner roar of a death-knell song that no one would hear. Tenor Brandon Jovanovich, a handsome figure who moves like a balletic athlete, branded the hero/lover Aeneas with his special magic, lyrical and Wagnerian in necessary turn. If beloved mezzo Susan Graham’s warm voice occasionally lacked the heft Berlioz begged for the character of Dido, her presence was staggering. Both her introductory and suicide arias forever burn in the heart.

Tenor Jonathan Johnson (Hylas) opens the final act singing a song of longing from the window of a rampart tower. In one of the opera’s few arias, Johnson’s spun heartfelt gold; his lyrical voice is beginning to take on a bit of copper metal at its core. A Ryan Opera Center member, Johnson continues to show great promise with each new role he undertakes.

But the ultimate spoils belong to Sir Andrew Davis, leading a spectacular orchestra and an augmented chorus that sounded like thousands, both brilliantly clambering and heart-stopping when in tutti mezza voce.

Somewhere, Berlioz is weeping. Pack your best hanky and rush to meet him. (Aaron Hunt)