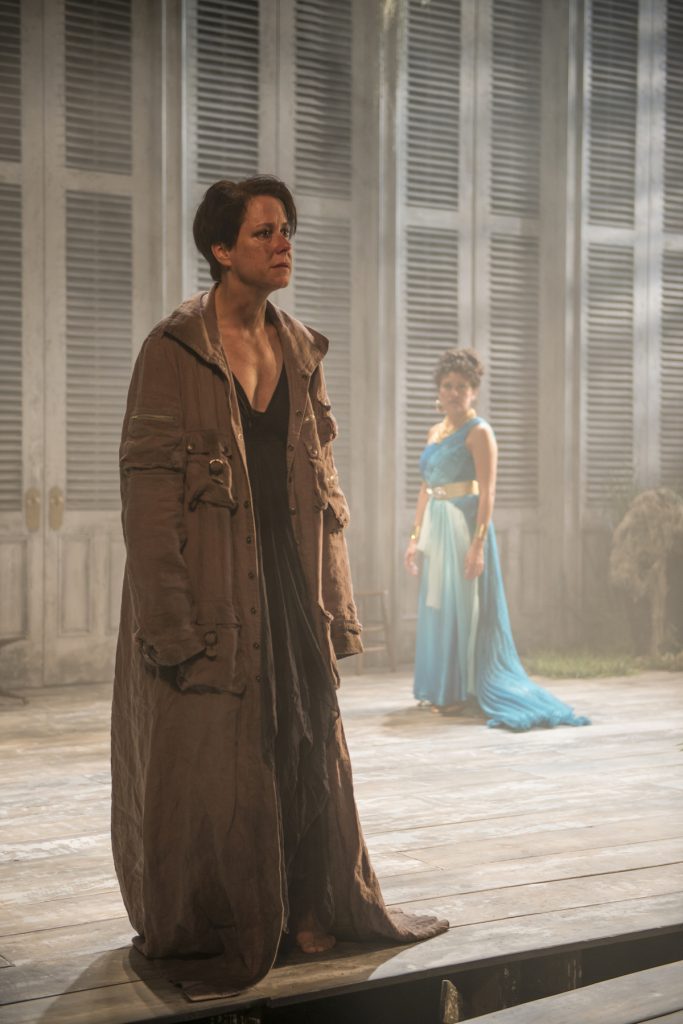 There is no curtain over the stage at Court, so the looming set, designed by Scott Davis, is the first entry point to Sophocles’ “Electra,” presented in a new translation by Nicholas Rudall and directed by Seret Scott. It is a remarkable sight—a façade, all white shutters and balcony, overgrown with swamp moss, balanced on a structure of rotting boards petrified in the moment of collapse. It is New Orleans, exaggerated and distilled and thus includes its associations: Carnival excess, catastrophic devastation and the perpetual pull of the swamp that eats away at every edifice and makes the buried dead rise up.

“Is it natural to forget the dead?” bellows Electra (Kate Fry), face smudged, dress in rags, still wearing the patched trench coat of her murdered father, Agamemnon. She is Hamlet’s implacable ancestress, the sole griever who bears the burden of vengeance against a treacherous mother and a usurping stepfather. “You love me. So suffer this,” she cries. Her wails are amplified by a chorus of three women (Caren Blackmore, Cruz Gonzalez-Cadel and Tracy Walsh) in bridesmaid-worthy gowns. The youngest one occasionally interjects in Spanish.

“When will you learn to yield to those who have power?” asks Chrysothemis (Emjoy Gavino), Electra’s little sister. But they are Greeks: There is no heroism in subtlety. Being dumb but practical is a tactic that might get you through life but not eternity. Still, who can resist the glitz of their vicious mother, Clytemnestra (Sandra Marquez), coruscating like the chandeliers that glint through the slats of the shutters as she offers a pannier of plastic grapes to Apollo?

The doomed house of Atreus is a house of many colors. Yet the production presents an unsettling image by substituting race for the masks of tragedy: Yellow for the obsequious sister, black for the disreputable king, brown for the evil mother. The righteous extermination at the end leaves the white ones standing. It is a curious outcome for our times, an intention that is as unclear as the pastiche of ethnic and historical elements haphazardly deployed throughout. (Irene Hsiao)