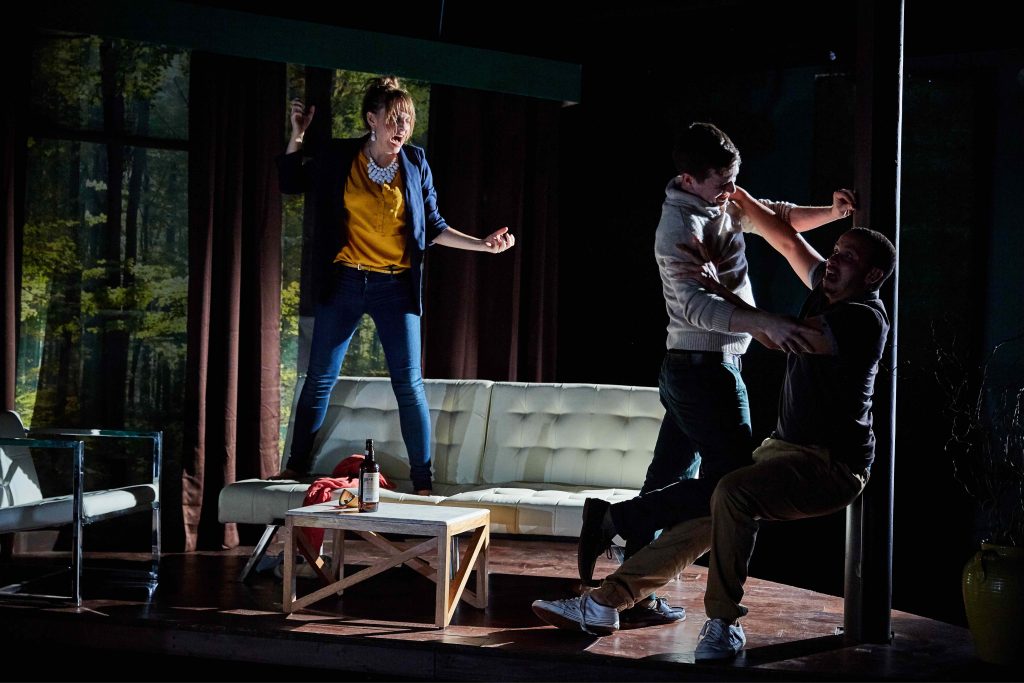 The premise of Emily Zemba’s new comedy, directed by Jesse Roth, sounds more like that of a horror movie. Four young and incredibly dumb lovers find themselves alone in a cabin in the woods of New Hampshire. Well, mostly alone. There’s a dead deer in the cabin too. Oh, and there’s also a weird guy from animal control who shows up to help and yet somehow seems to make things worse. On paper, this show should end with the four young lovers running terrified through the woods screaming bloody murder.

And actually that is exactly what happens. Just not in the ways you would expect. The play is more “A Midsummer Night’s Dream” than “Texas Chainsaw Massacre.” The lovers in question are nominally paired up into two couples. There’s Qiana (Shadee Vossoughi) and her boyfriend, Peter (Alex Stage), who are just looking for a nice romantic weekend getaway. Then there’s Peter’s high-strung sister (Kay Kron) and her bro nightmare-of-a-husband (Tony Santiago) who show up looking for… well it’s not clear exactly.

What is clear is that not a single one of these people is happy or fulfilled with their lot in life. As such, things get out of hand quickly. There’s a clandestine affair and a clandestine baby and reams upon reams of not-at-all clandestine existential terror. The play begins as a typical, if somewhat juiced-up, sex farce but it doesn’t stay that way for long. Soon enough, the play’s genre trappings have fragmented, allowing something much stranger to emerge from within.

That isn’t to say that the play is successful. It’s a mixed bag. Namely, the play has a talented, highly watchable cast—including Matt Nikkila as Lenny, the aforementioned weirdo from animal control—that still cannot fix a flawed script or muddled staging. The play wants to be two things at once: An absurdist sex farce and a snarky deconstruction of an absurdist sex farce. Unfortunately, the actors are left trying to play both simultaneously, resulting in paralysis. Much like its characters, “Deer and the Lovers” doesn’t seem to know who it is or what it wants to do. (Alex Huntsberger)

First Floor Theater at The Den Theatre 2B, 1333 North Milwaukee, firstfloortheater.com, $20. Through December 3.