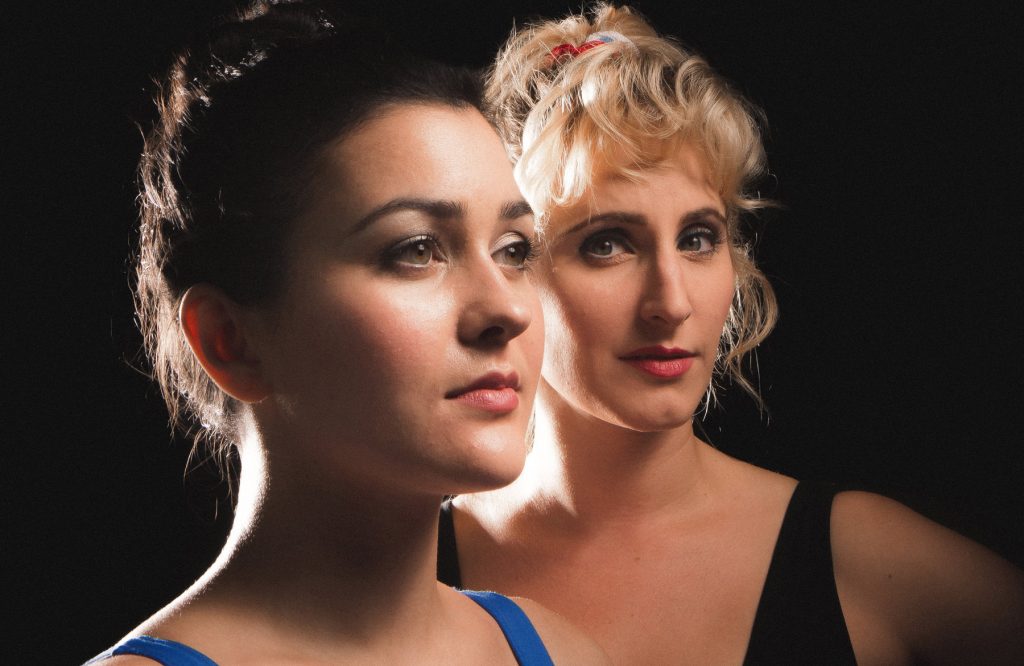 In showbiz parlance, “Tonya and Nancy: The Rock Opera!” is a prior-knowledge show, meaning that few viewers will go in without expectations or opinions. The title alone releases a flood of associations for those of TV-watching age in 1994, when the airwaves were dominated by the spectacle of Olympic figure-skating star Nancy Kerrigan getting her knees whacked by the ex-husband of Tonya Harding, her arch rival. It was a National Enquirer headline come to life. For the media, it was as if Christmas had come early that year.

“Twenty-two years ago, this was really the first twenty-four-seven story, playing nonstop on CNN and the other cable outlets,” says Elizabeth Searle, lyricist and librettist of the rock opera, which is now making its Chicago premiere at Underscore Theatre Company. Searle, a Massachusetts-based writer, says she became obsessed with the tale, especially in terms of the overkill coverage and its good-girl/bad-girl stereotyping.

“It’s a girl’s story and I’m a feminist whose writing tends to center on women’s bodies,” says Searle. She found an unexpected poignancy within the tabloid-style shenanigans, as well as some home truths about feminine archetypes and the toxicity of celebrity culture. Eventually, Searle’s reflection on the three major players—the tomboyish Tonya, the girl for whom skating was a ticket out of poverty; the blandly beautiful Nancy, whose doting parents expected perfection; and Tonya’s thuggish ex-husband Jeff Gillooly, who pushed the skaters’ rivalry to its violently absurd climax—first took the form of a novella titled “Celebrities in Disgrace.”

“Humiliation of celebrities—that’s the real American pastime,” says Searle. “I saw the situation as having a mythic quality. And so I created these flawed, larger-than-life characters and showed them going through the meat-grinder together.”

In 2006, in collaboration with her niece, Abigail Al-Doory Cross, Searle turned the novella into a half-hour-long chamber opera that garnered significant attention. Searle next teamed with Los Angeles-based composer Michael Teoli to expand the piece into a full-length rock opera featuring a new, much-augmented book and anthemic, rock-inspired tunes. The longer version premiered in Boston in 2011 and four years later played to full houses at the prestigious New York Musical Theatre Festival.

The play is coming to Chicago in large part due to the persistence of Jon Martinez, the Bridgeport-born director, choreographer and one-time skater who will be helming the Underscore production. Fascinated by the Tonya-Nancy tale, he learned of Searle’s work and lobbied hard for permission to mount it here.

“When people hear ‘Nancy, Tonya, rock opera,’ they think camp,” concedes Martinez. “But I was adamant about finding the heart amidst the pandemonium. And as a choreographer, I had a vision of how it would work on stage.”

Staging a rock ‘n’ roll cultural critique on (fake) ice is no simple matter. Martinez describes the show from the perspective of the actors as a “marathon,” featuring a “non-stop frenzy of belting your face off while lifting others.” A narrator and Greek chorus of fellow athletes comment on the surreal but actual events, often quoting verbatim from contemporary headlines and interviews.

Dramatically and musically, the challenge of a show like this is to call upon what is already inscribed in our collective memory without reenacting the snarky vulgarity of the original media carnival.

“No matter who I tell about this, the reaction is, ‘You’re playing the bad girl,’” says Amanda Horvath, the show’s Tonya, who was banned from the sport for life after the 1994 Olympics. “But the more I got to know about Tonya Harding, the more I realized that this was all she had going for her. There’s a reason she was like the dictionary definition of ‘ferocious.’” Justin Adair, Horvath’s real-life fiancé, portrays Jeff Gillooly of momentary kneecapping fame.

With Nancy, the struggle is to keep the character interesting. “She’s riding on this very level plane,” says Courtney Mack, who plays the stately, raven-haired victim of the vicious attack. “But underneath, there’s all that pressure.”

A life that revolves around competition cannot be a normal or balanced one. Skaters at this level sacrifice their childhood for the pursuit of something they have almost no chance of winning (Kerrigan ended up taking silver in 1994 and a clearly discombobulated Harding failed to medal), watched by a global audience that at some level wants to see them fall, all to boost Nielsen ratings. Tonya Harding, who imploded under the tension, continues to capture our attention not just due to the Jerry Springer-quality of her saga but also because of its resonance. She is the funhouse-mirror image of a winner-take-all society.

“To be honest, I’m surprised this kind of thing doesn’t happen more often,” says Searle. “It comes with the way we raise kids. There’s a lot of bullying out there and the obsession with celebrity culture powers the cruelty.”

Martinez sees “Tonya and Nancy” as a way of tying up loose ends.

“When the frenzy hit in 1994, the women had no defense—people saw what the media decided to show,” he says. “This show gives them a chance to state their case.”