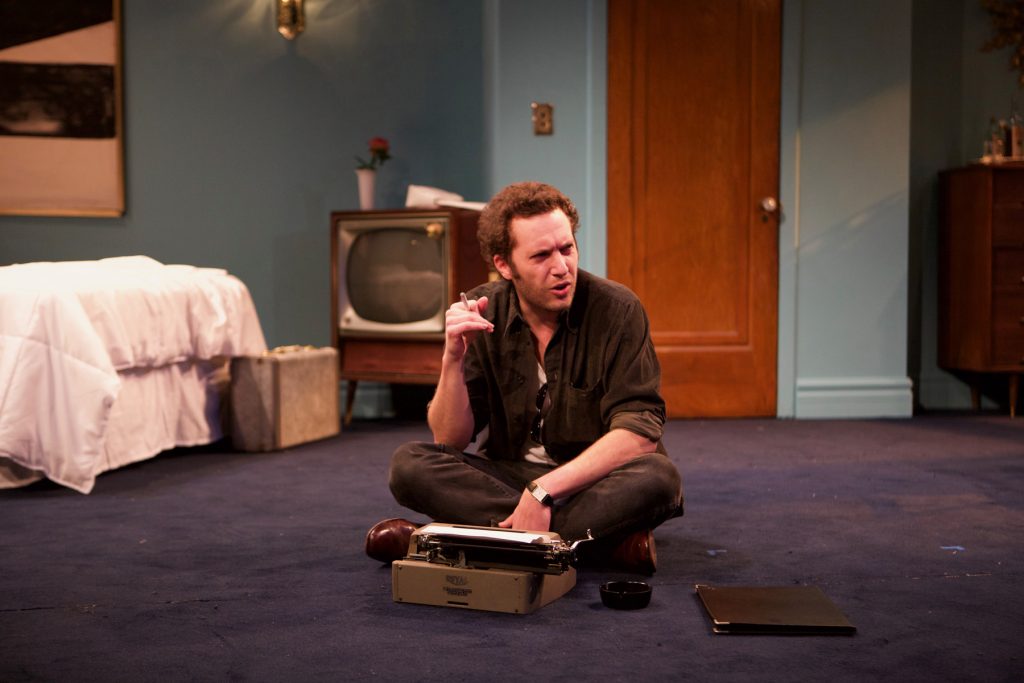 Easily one of Chicago’s most instantly recognizable theatrical voices, Calamity West continues her streak of meta fiction with “Give It All Back,” a staged roman a clef tribute to the tribulations of the artistic process and a surprisingly forgiving examination of the toxicity of fame. Taking place in the mid-sixties and concerning the brief European stay of The Artist (Andrew Goetten), an archetypal songwriter who has abandoned his folk roots for the relatively untrodden path of rock ‘n’ roll, West’s play attempts to straddle the line between the wink-and-nudge of referential parody and the warm fuzzies of outright sincerity though picking a lane would greatly help clarify her intentions.

With dramatic touchstones in D.A. Pennebaker’s “Dont Look Back” and Todd Haynes’ “I’m Not There,” Sideshow’s production settles for somewhere between those two films’ distinctive styles, resulting in a kind of flat realism with touches of the occult. West’s individual scenes are excellently crafted and the actors, especially Mary Williamson as the shambling and salty Poet and Pat Whalen as the hilariously high-strung Representative, entertain thoroughly.

However, the production as a whole doesn’t hang together. In addition to a few flubbed lines and some technical difficulties the evening I attended, the play’s transitions, which sometimes form a part of the narrative and sometimes seem purely perfunctory, add to the sense that this production is currently under-rehearsed. Additionally, director Marti Lyons doesn’t always seem to know what to do with her actors, who are confined by three walls in a hotel room that is more spare than swank.

There is one element in particular that is unshakably irksome: The play’s title, specifically the use of the word “give,” which implies a generosity that no character, even after their respective catharsis, possesses. “Dont Look Back” was a brilliant title for Pennebaker’s film because it captured the spirit of an artist who was seeking to detach himself from history: musical, political and personal. While West identifies the suffocating sense of isolation, she let’s her Artist off the hook too easy, perhaps as an unintended consequence of self-identification with her own creation.

No doubt the creative process is brutal for those who forge ahead into unknown territories and it’s not difficult to appreciate West’s ambition here. Yet while humanizing a pariah is a Sisyphean endeavor, “Give It All Back” nevertheless feels only part way through its ascent. (Kevin Greene)