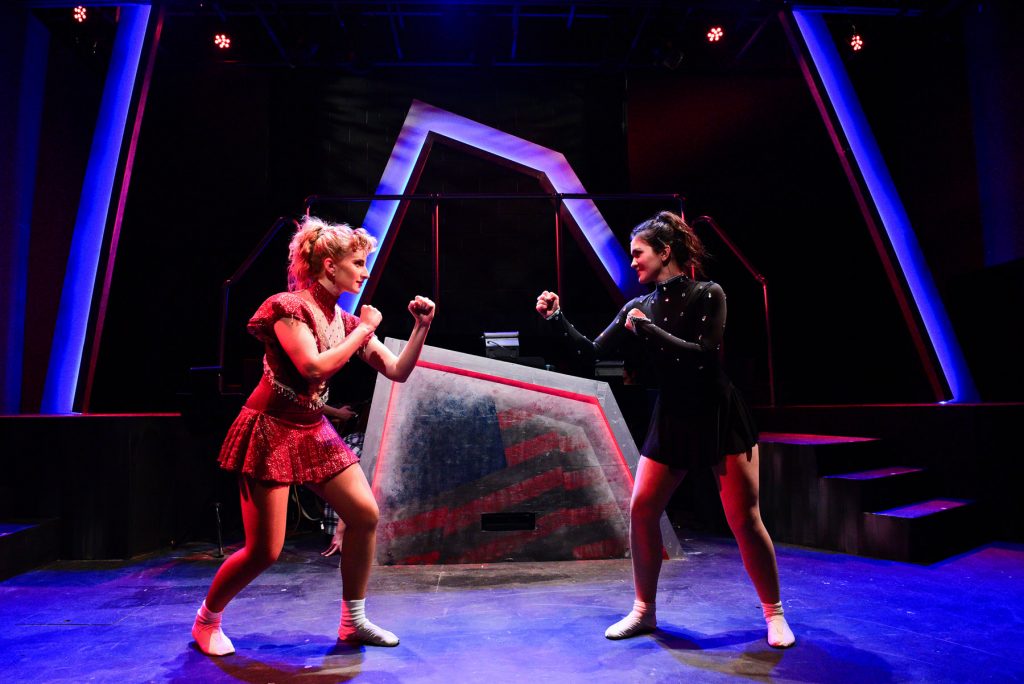 Ponytails are high but passions are higher on Olympic ice, a territory where rhinestones and illusion netting are de rigueur and every contestant has but three-and-a-half minutes to prove her dominance over her spangle-clad opponents.

Princess Nancy Kerrigan (Courtney Mack) holds court in America’s hearts but trailer queen Tonya Harding (Amanda Horvath) grips the country a little lower down. Both ladies are backed by mothers of the sternest variety (Veronica Garza, in a ferocious turn as both Brenda Kerrigan and LaVona Fay Golden). More cutthroat than their glittering spawn, they’re each rapacious for the opportunity to bite down on Olympic gold. Needless to say, there’s enough Aquanet in the air to ignite a thousand meltdowns in Elizabeth Searle’s “Tonya and Nancy: The Rock Opera,” directed and choreographed by Jon Martinez and with music by Michael Teoli.

The sordid story of rival skaters that made journalists feverish with schadenfreude seems tailor-made for an opera. After all, how can you go wrong with a blonde and a brunette, a goody-two-skates and a bad girl, daddy issues and mommies dearest and the rumpus of crazed fans and paparazzi watching every microsecond in slow motion on repeat with commentary for the tiniest slip? Underscore Theatre Company delivers with a cast that sings their guts out, dances their pants off and gamely executes faux triple lutzes, penalties be damned. With thirty-one musical numbers in ninety-five minutes, an astounding recruitment of neon and spandex and nearly every actor careening at a madcap pace between multiple characters, the play radiates like a strobe light hitting a disco ball.

Told in flashbacks narrated with manic flair by Caleb Baze, “Tonya and Nancy” relays a cautionary tale of ambition, manipulation, competition and the appalling way men and women treat girls. As the scrappy skater whose pioneering triple axel was besmirched by her alleged role in the kneecapping of her opponent, Horvath is a surprisingly vulnerable Tonya, while Mack pouts, whines and flounces as a bratty Nancy whose famed “Why me?” soars angelically into the rafters. Justin Adair is a nasty, crooning Jeff Gillooly, comically backed by Vasily Deris and Graham Hawley as his shimmying, baton-swinging accomplices. (Irene Hsiao)