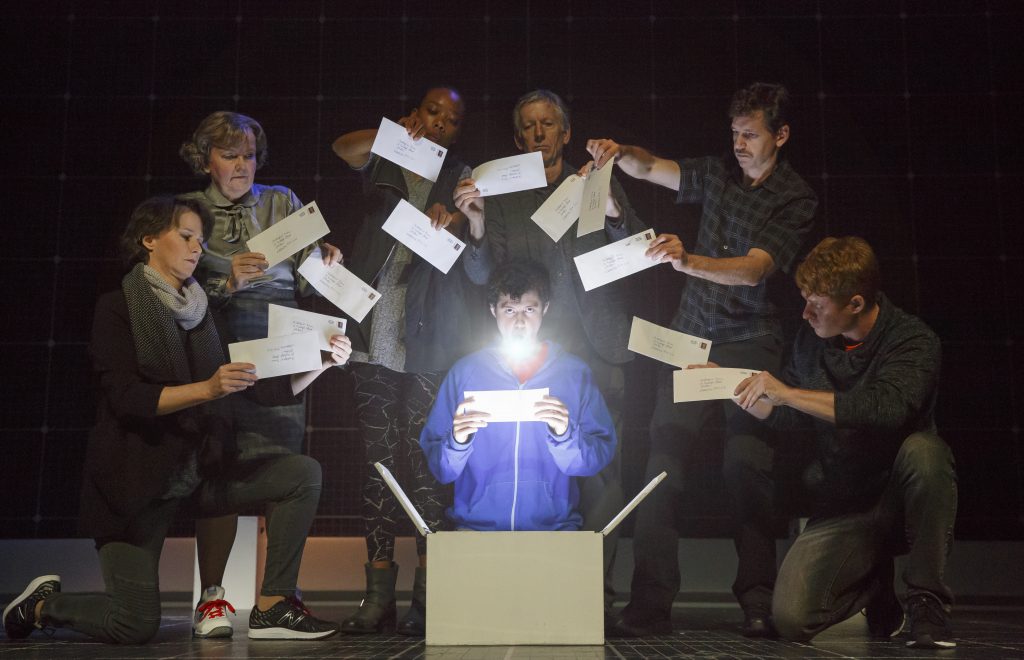 Adam Langdon (center) with the cast of “The Curious Incident of The Dog in the Night-Time”/Photo: Joan Marcus

Sitting in the audience for “The Curious Incident of the Dog in the Night-Time,” it’s possible to perceive, amongst flashes of sheer brilliance, a utopian vision of the future of theater. The play is a sensorial experience with few comparisons. And while there is temptation to anchor its loftiness with comparisons to Cirque du Soleil or some of New York’s more satisfying high-budget avant-garde spectacles (“Fuerza Bruta” comes to mind), what “The Curious Incident” does that those do not is fuse spectacle to story. The colossal effort on stage is dedicated to portraying the subjective experience of the play’s protagonist as a heightened and breathless extension of our own.

Based on the New York Times best-selling novel by Mark Haddon, which, upon its publication, rivaled the Harry Potter series in its cultural ubiquity, “The Curious Incident” was a memorable book though not one that screamed “stage adaptation.” Playwright Simon Stephens distills and disperses the book’s internal monologue nicely though it is less the mechanics of his writing that attracts attention than the means used to convey his words.

It is difficult to discern where Stephens’ fine dramatic nuances end and the work of director Marianne Elliott, choreographers Scott Graham, Steven Hoggett and the brilliant design team (sound from Ian Dickinson, lights from Paule Constable and projections from Finn Ross) begin. This outstanding play represents a cohesion of individual elements into a whole of such remarkable totality that it eclipses the parts that made it up. As a work of art unafraid of and unencumbered by technology, it is not unlike “2001: A Space Odyssey” for the modern theater.

Naturally, there are many excellent performances, the best of which comes from Adam Langdon who, never leaving our view except during several well-timed blackouts, performs a two-and-a-half hour anxiety attack as Christopher, the adolescent protagonist whose condition—while never explicitly stated—reflects our overall lack of understanding in regards to developmental disorders. A story of family and forgiveness, “The Curious Incident” feels at times like Sherlock Holmes recounting a love affair, its tenderness made excruciating by the attention to detail.

If there is any criticism against the play it is that some of the details are being writ onto our senses so quickly that they smudge a bit. The second act extends the cheeky self-reflexivity of the first a bit too far, yet admittedly these pockets of meta theatrics do offer a respite from the at-times-overwhelming intensity of sound and vision.

This artistic curiosity is only in town briefly. Be brave, do whatever you have to: Just make sure you get there. (Kevin Greene)