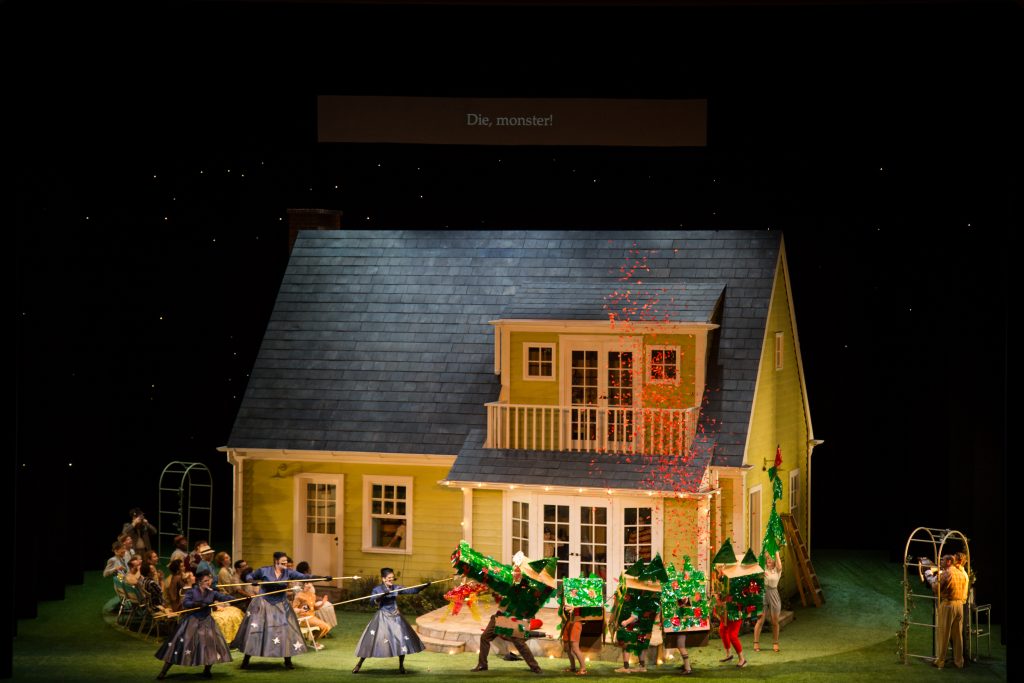 The cast of “The Magic Flute”/Photo: Andrew Cioffi

Reviewers frequently receive press packets prior to opening night. When I opened the link to view the photos for Lyric’s brand-new production of “The Magic Flute,” Dorothy Parker jumped full-voiced from my mouth: “What fresh hell can this be?” The set and properties looked so simplistic as to appear penny-pinching. There was a single Cape Cod-ish house, with a cast seated on its lawn on their grandmother’s hand-me-down kitchen chairs. The costumer had clearly gotten lost in Disney’s “Snow White” woods and was sending back sketches via Maleficent’s carrier crow. After years of Julie Taymor’s stilt-puppet magic, my first thought was that this production’s budget had been robbed to pay for “Les Troyens.”

Imagine my delight when director Neil Armfield’s production transported me back to a 1960s house party, where a fantastical entertainment was being supplied by the neighborhood children. Perfectly coiffed Laura Petrie-like moms watched their children race around the corners of a post-WWII home, up the stairs inside set and costume designer Dale Ferguson’s revolving family sanctuary to dangle homemade birds from dad’s fishing rods all while trailing glittering, unsophisticated paper dragons. With Pamina, Tamino and Queen of the Night all dressed just this side of a copyright lawsuit brought by seven short fellows, I was awash in a magical story told in sweetly naïve whispers.

The wildly talented neighborhood adults who sang the music the children inspired must have made one hell of a local church choir. Andrew Staples (Tamino) sang with an achingly earnest tenor and Christiane Karg (Pamina) was picture and pitch-perfect. Christof Fischesser (Sarastro) rumbled thrillingly and Kathryn Lewek (Queen of the Night) is setting a new standard for the amount of heart-stopping vibrato a high F can withstand.

My guess is that the largest percentage of audience members at Lyric are a part of that gigantic generation of baby boomers who remember Dorothy Parker’s quips and Walt Disney’s hand-drawn fairy tales and who can also recall a time when every citizen could have their own house. In a time torn to its foundations, why not revisit a historical tranquility? (Aaron Hunt)