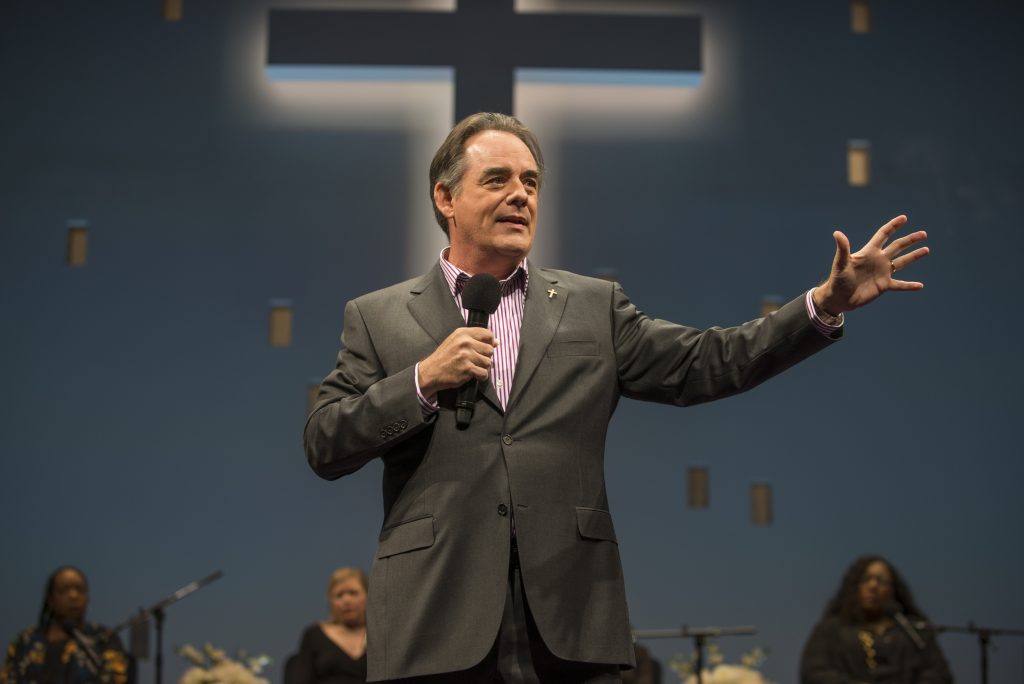 During the opening moments of “The Christians”—Lucas Hnath’s latest play, currently receiving its Chicago premiere at Steppenwolf Theatre with direction by K. Todd Freeman—one thing is clear: The design team clearly had a ball. Tasked with cooking up a cheesy, over-the-top megachurch service, the team of Walt Spangler (set), Scott Zielinski (lights), Joseph A. Burke (projections), Jaret Landon (music direction), Rob Milburn and Michael Bodeen (sound) deliver a technical masterpiece that never crosses the line into parody. Though it deals in certain absurdities, “The Christians” never stops striving to see beyond them, to find the deeper human impulses that motivate faith.

“The Christians” tells the story of Pastor Paul (Tom Irwin), who presides over a thriving, vaguely conservative megachurch. During a Sunday service, which opens with a rousing set of religious anthems from the church’s choir (Faith Howard, Yando Lopez, Leonard Maddox Jr., Jazelle Morriss, Mary-Margaret Roberts and Charlie Strater), Pastor Paul shares that he has had a revelation and now no longer believes in Hell. Paul’s fiery associate pastor Joshua (Glenn Davis) immediately rejects this new path, leaving the church and taking some parishioners with him.

Over the course of eighty minutes, we see how Pastor Paul’s momentary act of theological courage begins to tear his flock apart. In scenes with his wife (played by Shannon Cochran), a church board member (Robert Breuler), a distraught member of the congregation (Jacqueline Williams), as well as a second, more revealing encounter with Joshua, Pastor Paul reveals that he too suffers from the kind of pig-headed stubbornness that mistakes belief for certainty. In comparison to Joshua, who may be a zealot but who is at least an honest and clear-eyed one, Paul is a terrible pastor.

But he is not alone in his solipsism. The play is performed entirely on the stage of the megachurch, with each character using handheld microphones, as though each of them—even during scenes that take place in private quarters—are delivering sermons, their own personal, irreconcilable version of the Gospel. (Alex Huntsberger)