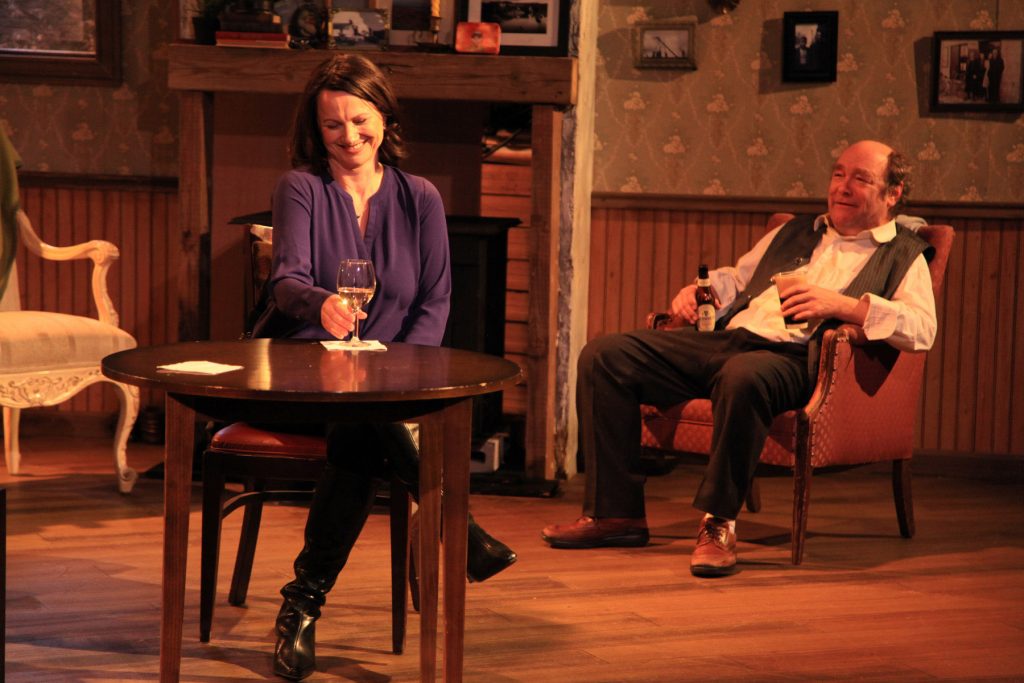 A weir is a structure built across a water way. Less obtrusive than a dam, it nonetheless changes the essential nature of the water flow. In the right hands, it can also be a powerful metaphor for the subtle and not-so-subtle misdirection of life itself. Written by Conor McPherson when he was just twenty-six, “The Weir” perfectly captures the longing and regret of middle age and beyond via a group of men and one female visitor passing the time in a local pub. Braced against the howling winds one winter evening, their conversations turn to local legends as the men relay their experiences with faeries and ghosts. Not to be undone, the stranger has a story of her own that is both terrifying and tragic.

The pub is cozy, the brogue is thick: this is a production that looks and feels like rural Ireland. Emcee to this world of casual drinks and lingering pain is Jack (Brad Armacost), an elderly bachelor with an inexhaustible supply of stories. Armacost is brilliant in his depiction of the self-professed contrarian and traditionalist (his discomfort is plain, for example, when a faulty keg results in him having to drink Guinness from a bottle). Jack also regularly bottles up his feelings only to later release them all at once in a shower of emotions. The newcomer, Valerie (Sarah Wellington), is a natural conduit for Jack. His final story, delivered to her after most of the others have left, is a powerful commentary on the haunting nature of regret.

At 105 minutes, the characters are allowed sufficient time to not only tell their stories but also connect and spar with one another. This is a very natural feeling production and director Siiri Scott engages the audience at every level. It may take a little time to get use to the accents but the payoff is well worth it. (Noel Schecter)

Irish Theatre of Chicago at the Den Theatre, 1333 North Milwaukee, irishtheatreofchicago.org, $26-$30. Through January 22.