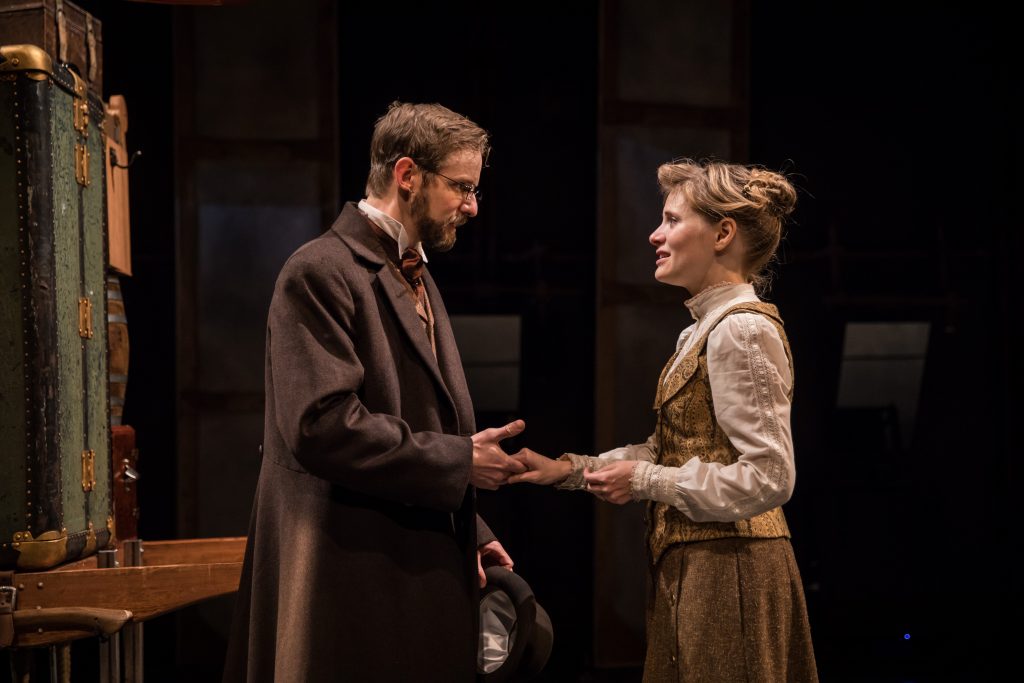 Last fall I interviewed Mary Zimmerman about her then-upcoming adaptation of Robert Louis Stevenson’s “Treasure Island.”  We talked about how children learn to cope with fear and how our instincts to protect them from the world can be counter-productive or at least short-sighted. It’s like warning the parent of a twelve-year-old that the play they’re going to see contains “mature language.” Almost invariably they will respond, “Well, I’m sure they’ve heard worse already.”

“Mr. and Mrs. Pennyworth,” a lovely world premiere written and directed by ensemble member Doug Hara, is holiday adjacent: It deals with our personal relationships to stories that, by their very ubiquity, engage us as a collective. It is a bittersweet romance and meta noir with touches of existential anxiety and a heartbreaking twist. While more classic holiday fare acknowledges the possibility of loss through tales of redemption, much of the canon takes the long way home in order to avoid the twisted alleys of grief.

Hara’s adventurous two-hander features Samuel Taylor and Lindsey Noel Whiting as the titular leads. Their mutual affection is winning; the sense that they truly and deeply love each other is as clear as crystal in every gesture and word. Aided and abetted by Manual Cinema Studios (shadow animations) and Blair Thomas (puppet design), “Mr. and Mrs. Pennyworth” distills suspension of disbelief into its simplest and most profound form. The artifice is fully and delightfully visible. Yet it is so compelling that we become the unwitting link in the chain of illusion.

Of course, our subconscious gets plenty of assistance from the consummate professionals at Lookingglass. While “Mr. and Mrs. Pennyworth” may not feature the athleticism of “Thaddeus and Slocum” or the sheer audacity of “Moby Dick,” the relative smallness of the production is effective and efficient. At ninety minutes, there is room enough for contemplation on the vitality of villains (what is a hero without one?) as well as a montage tour of some of the world’s most popular myths and legends.

And yet it is the emotional heft of the play’s conclusion that sticks with me. Love can be a cruel fate. It’s also, paradoxically, the way forward. We live our own stories. But, as this play reminds us, we also live them together. (Kevin Greene)