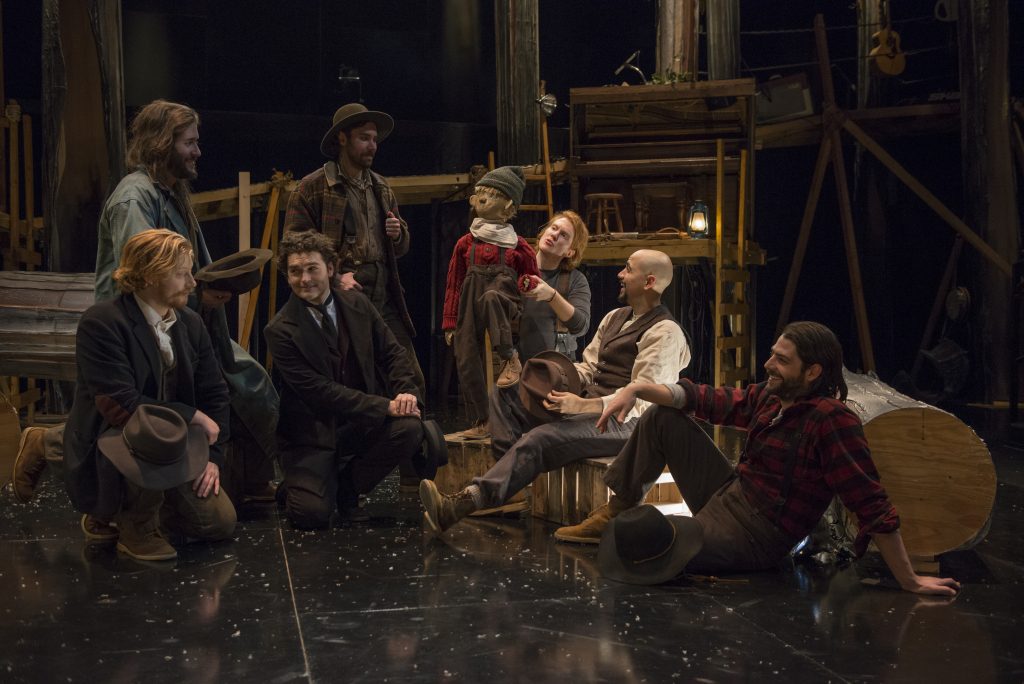 The cast of “The Hunter and The Bear”/Photo: Michael Brosilow

The connection between the holidays and the spirit world has been forged over hundreds, if not thousands, of years. From Krampus to the Marleys (not to mention the tradition of Christmas-themed horror films), these seasonal tales seem as likely to warm your heart as they are to tingle your spine. Writers Theatre and PigPen Theatre Co.’s “The Hunter and The Bear” fits nicely into this tradition, albeit with a greater emphasis on the dark night of the soul than on the redemptive power of love and forgiveness.

Set in the lush forests of the Northwest during the pioneer days of yore, “The Hunter and The Bear” plays nimbly with archetypes: the headstrong single father, the vaguely sleazy entrepreneur, the perpetually spooked outsider. The seven young men who comprise PigPen Theatre Co. are a naturally dexterous bunch. Their multifaceted performance includes puppetry (of both the shadow and physical variety), Fleet Foxes-esque folk and a largely self-created, frequently haunting soundscape. Collette Pollard’s scenic design, a woodland that shifts from magical to nightmarish, gives the boys plenty of room to play.

An energetic bunch, PigPen tell their tale with equal parts ingenuity and precision. In the spirit of devised work, the play’s narrative is fused to its action. Despite the sedentary nature of telling ghost stories, “The Hunter and The Bear” is frequently on the move, whether in hot pursuit of the folkloric beast of its title or in well orchestrated exchanges of instruments or Scott Dickens’ ingenious props. At one-hundred minutes, the play is relatively long for being without an intermission but given the subject matter, as well as the expert pacing, you’ll be glad that it charges along as it does. After all, what kind of ghost story has a bathroom break?

Unfortunately when the climax arrives it becomes clear that the play has painted itself into a corner, leading to a twist and subsequent heavy-handed morality that, by comparison to the tightness of the action that leads up to it, is bound to disappoint, even if only slightly. Still, theatrical fare this time of year is not always designed for the adventurous. “The Hunter and The Bear” succeeds in delivering a fresh take on a tale as old as time. (Kevin Greene)