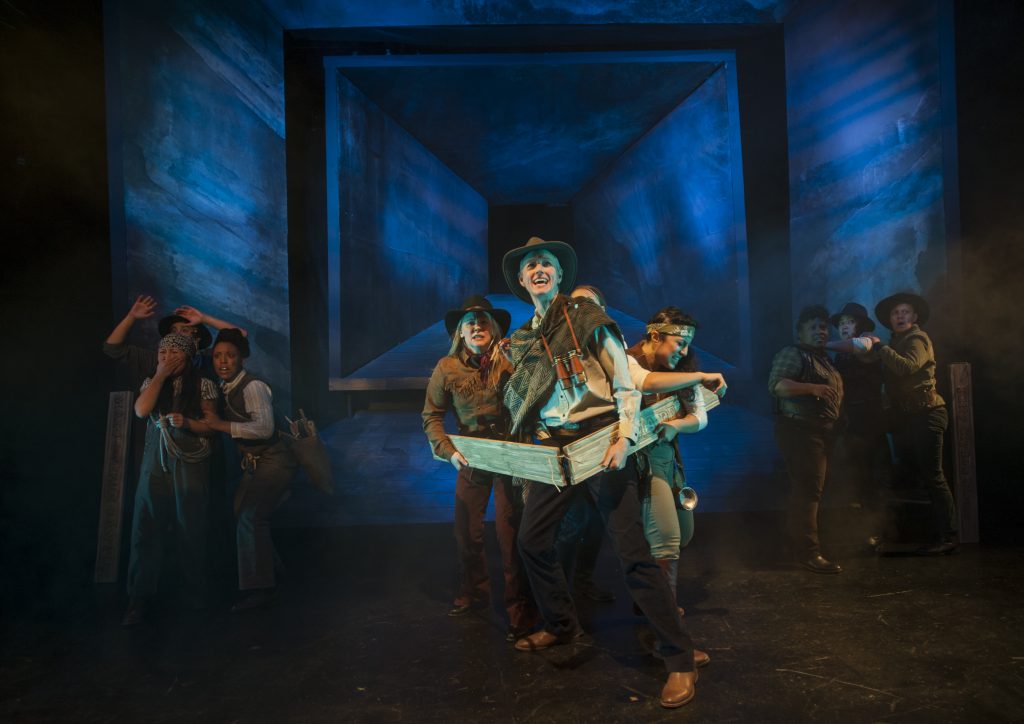 The cast of “Men On Boats”/Photo: Michael Brosilow

Spoiler alert: there is a somewhat misleading word in the title of Jaclyn Backhaus’ “Men On Boats.” Starring nine women and one gender non-conforming individual, American Theater Company’s production, the first with their new artistic director Will Davis at the helm, is only nominally about men; their absence on this particular stage serving as a reminder of their voluble abundance nearly everywhere else. Adapted from the real-life journals of John Wesley Powell during his 1869 expedition down the Green and Colorado Rivers through the then-uncharted Grand Canyon, Backhaus’ play is a delightful skewering of the myth of frontier masculinity, a notion that, as anyone who has watched “Westworld” can tell you, has proved to be as historically pervasive as it is utterly toxic.

In the spirit of The Five Lesbian Brothers and sharing several cast members with last season’s production of “The Secretaries” at About Face Theatre, “Men On Boats” is a play about giving agency and visibility to those on the other side of narratives dominated by men, particularly those of the heterosexual caucasian variety. Backhaus takes this idea one step further by flipping genders with tongue-in-cheek non-nonchalance in an effort to demonstrate the flimsy construction of gender norms. The play asks important questions such as: are the journals of Powell rendered any more or less comic in their limited ability to communicate the sublime when read with exaggerated bravado by Kelli Simpkins?

The personalities of the play are embodied wonderfully by their respective actors in a style that blends deadpan and slapstick so expertly that the force of the humor is redoubled by the poker-faced performances. Lead by Simpkins and ensemble member Kelly O’Sullivan as her comic foil, their experience is met with the game-for-anything vigor of some promising young talent including Arti Ishak, BrittneyLove Smith and Lawren Carter. The overall enthusiasm of the cast is rewarded by Davis’ directorial style, which emphasizes movement and lends “Men On Boats” an energized, balletic quality.

“Men On Boats” may be more morally ambiguous than Backhaus’ “You On The Moors Now,” which had its excellent Chicago premiere last year at The Hypocrites. Yet her vision is unique, essential and well-suited to Davis’ own stated goals for his new home company. As an indication of the direction ATC is headed in, it signals many good things to come. (Kevin Greene)