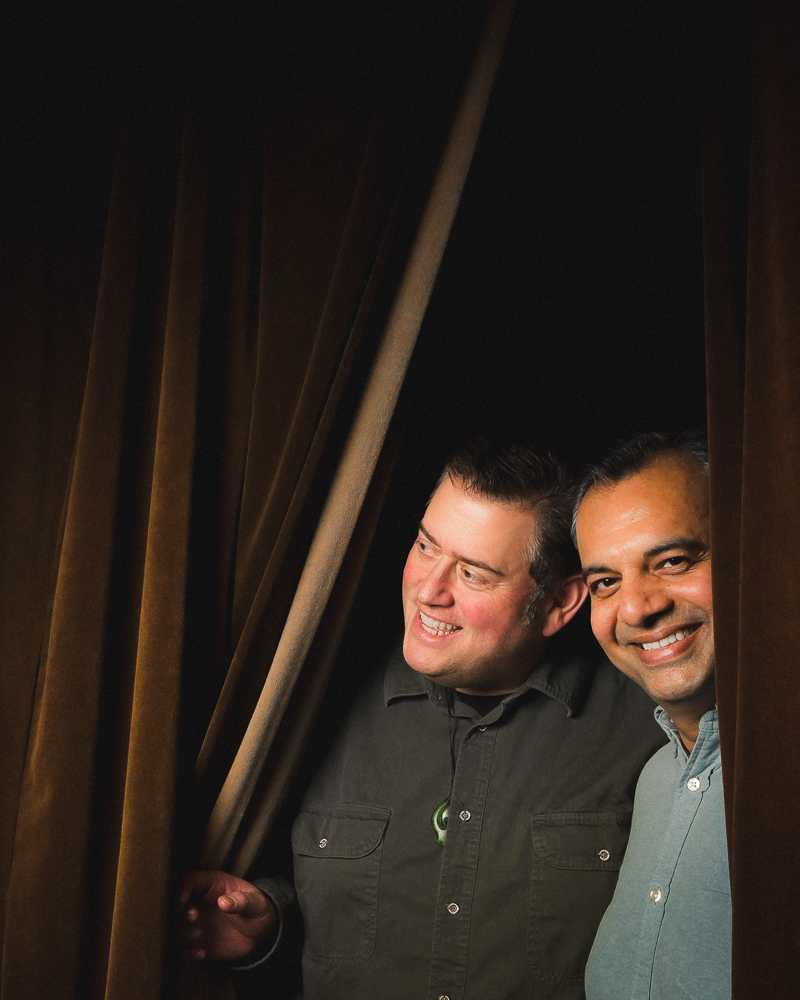 The Silk Road refers to the region spanning from the Mediterranean to East Asia. While its historical usage refers to goods, its contemporary coinage is a blanket term for a diverse group of rich and vibrant cultures that have nevertheless been largely ignored or reduced to stereotypical representations in Western art and entertainment. Founded in 2002 in the wake of September 11 by life partners Jamil Khoury and Malik Gillani, Silk Road Rising’s ongoing mission is to counter Islamophobia, xenophobia and racism by addressing the dearth of representation of Silk Road peoples on Chicago stages. Over the course of fifteen years, the company has spawned numerous initiatives and expanded their artistic endeavors to include film and video. With the imminent inauguration of Donald Trump, the very existence of Silk Road Rising has become as imperative as its mission.

What are some of the challenges to producing work that highlights the experiences of Asian Americans and Middle Eastern Americans? Are those challenges compounded by adding religion into the mix?
Jamil Khoury: One of the biggest challenges is conveying the richness and diversity of Silk Road experiences, particularly in light of the limited representation, misrepresentation and poor representation that already exists. There’s also a certain burden of representation unfairly placed on the shoulders of Asian-American and Middle Eastern-American artists to somehow convey “everyone’s story” or the “correct story” or the story that “makes us look good.”

It is impossible for us to disentangle religious identities and practices from conversations about Silk Road cultures. Nor should we. Questions of faith, spirituality and religious observance play an important role in the stories we tell. We have found in much of the theater sector a certain “fundamentalist secularism” and an aversion to discussions about theology and the identity politics that coalesce around religion. Early on we decided that we would challenge many of these phobias and work to reverse the stigmas that many theater artists have attached to religion.

Malik Gillani: A significant challenge to producing Asian and Middle Eastern work is that these communities are so maligned in the public opinion, that someone doesn’t want to randomly see our stories. Someone reading a review of a play may say, “Let’s go see this” but when the review is about a play that explicitly represents our communities, it is a special person who is coming. Our patrons are those who are very curious about the world, who want to be connected with new peoples and communities and discover something new. Pew Research said that their data indicated Muslims are not only disliked but despised by the general public. So when we produce our work, in many cases, we’re asking people to pay to see people they despise. That’s a tall order.

By the same token, there are many good and curious people who want to see these stories but they’re not aware of us. Therefore publicity and press attention are critical to our success.

The success of Ayad Akhtar’s “Disgraced” and HBO’s “The Night Of” have illuminated some of the experiences of modern Muslims. Paradoxically they’ve demonstrated the general lack of these perspectives in art and entertainment. As a company that has spent more than a decade telling the stories of Muslims, have you noticed any kind of a cultural shift in how these stories are being met by audiences?
Khoury: We like to say that we operate under the assumption that Muslims are neither angels nor demons but real people like everyone else. And although said premise may be so obvious as to sound absurd, the depictions of Muslims in American pop culture and theater suggest that the Muslim demon archetype is alive and well. Even the Muslim character who starts off as nuanced and sympathetic ultimately must commit an act of violence to remind us all just how bad they really are. We’ve most definitely seen a marked increase in the desire for three-dimensional, complicated renderings of Muslim-American characters and experiences; characters and experiences that don’t rely on affirming our worst fears in order to feel credible.

Unfortunately, the persistence of Islamophobic thinking, no doubt heightened in the past eighteen months of electioneering and fueled by Islamist violence, has worsened public perceptions of Muslims. I’ve often said that the only effective way to combat Islamophobia is to also combat Islamism and the ideologies that feed it. If people are afraid of Muslims, we need to address the source of those fears head on. If we want to build coalitions between Muslims and non-Muslims, we need to illuminate how we are all threatened by forces of ignorance and extremism, no matter where it emanates from and that we walk on common ground when battling those forces.

It’s more than fair to say that people of color have to work harder than white people to achieve the same goals. Silk Road Rising goes above and beyond just producing theater. Do you feel that being a company specializing in underrepresented voices has necessitated some of the non-theatrical work you do?
Gillani: Our non-theater-based programs came out of a commitment to building bridges. For instance, EPIC (Empathic Playwriting Intensive Course) is a twenty-session in-class program for public schools that teaches students how to write a play. If we are to serve the “community,” we must also be sure to serve the young. This initiative helps us ensure that there are future playwrights as well as help Chicago’s youth discover that they each have a story worthy of sharing.

Our video-based initiative was developed to expand our audience. We feel strongly that our mission should not be limited to only the change we can have at a theater venue. We owe it to ourselves to be present where people congregate. One such venue is online. People are searching on Google, looking up videos on YouTube, and trying to build conversations on social media. Our video-based work is designed to meet people online and to be only as far as their smartphone. Another reason we developed video plays is because so many people were writing to us from around the world letting us know they discovered our theater but felt that they had no way of participating in our artmaking. Our video and digital work helps bring these communities into the fold.

We learned that our video plays have another use that we initially did not foresee: to be able to tour into communities. For instance, with our “Mosque Alert” play project, we toured a developmental video into over thirty community centers such as libraries, college classrooms, mosques, churches and synagogues. We brought artwork created by Silk Road Rising into venues and to peoples who had not previously engaged with our stage work. Videos have become a way for us to have dialogue and to generate a future live stage audience.

Islamophobia, xenophobia and racism are qualities that have been a part of our country since its founding. They are ubiquitous and yet largely unacknowledged by mainstream media. However, the recent election dragged them to the forefront. Can this be seen as a silver lining in addressing bigotry or do you feel like the events of the last year have set us back even further as a country?
Khoury: I think many of us are living with feelings of uncertainty, anxiety and profound fear. A lot of people are feeling rejected, repudiated and more vulnerable than before. The election of Donald Trump has unleashed, and in many ways legitimized, racist and Islamophobic sentiments that manifest quite seamlessly as violent hate crimes and scapegoating campaigns.

Gillani: I’m the “glass is half full” kind of guy. I think the ugliness we’ve witnessed has helped people of conscience stand up. Everyone needs to at some point in their lives make a decision: which side of history do you want to stand by? What will you tell your friends and children when they ask, “How did you respond to the ugliness?” Silk Road Rising is a way for individuals and companies to align themselves with a group that is pro-Muslim, pro-feminist, pro-immigrant, pro-LGBT, anti-racist and anti-colonial.

How is Silk Road Rising preparing for the next four years?
Khoury: The election of Donald Trump points to the urgency and importance of the work that we do. It has emboldened us to double down on our mission and polycultural worldview. I believe that the next four years will be characterized, in part, by a renaissance of art that is pluralistic, anti-racist and anti-colonial; art that embraces nuance, political discourse and debate.

Gillani: It is my belief that while Silk Road Rising was born out of 9/11, the last fifteen years have been a “preparation” to respond to 11/9 [the day we learned Donald Trump won the presidency]. In order to properly respond, we need to develop and produce more work and stories that have to be told as soon as possible. Jamil is looking to commission new plays about the many ways stories of Silk Road peoples overlap with non-Silk Road communities. We’re also eager to visit communities throughout the Midwest to share our video work, to work with local theaters to stage plays and then, more importantly, lead those gathered in a dialogue.

How do you respond to hate? With love. We love the opportunity that has been afforded us to create and share art. How fortunate am I that I’m alive at a time when my skills can be helpful? When our company’s strengths can be leveraged to create an inclusive community? I’m so grateful for the sacrifices of others for creating ideas that have shaped a culture which wants to celebrate its diversity. We are also honored to be part of a continuum of artist activists. Art is beautiful, but it is glorious when it serves a purpose greater than solely its creation. It can build bridges, give hope, give voice, and nurture communities.