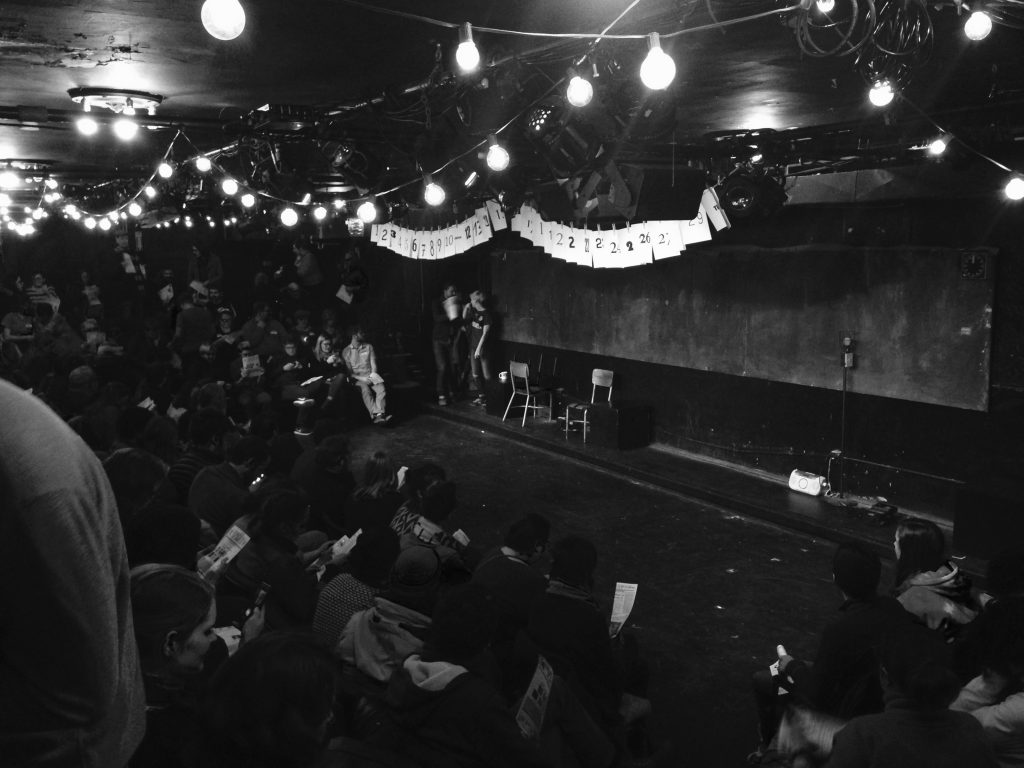 The Neo-Futurists prepare for the final performances of their signature show “Too Much Light Makes The Baby Go Blind”/Photo: Kevin Greene

In case anybody needed more proof that some kind of dark and bullying energy had been wreaking havoc with 2016, Greg Allen provided a heartbreaking example on the last day of November. Allen, the founder of the long-standing Neo-Futurist theater ensemble, announced that he was revoking his company’s rights to perform their signature late-night staple, “Too Much Light Makes the Baby Go Blind,” effective after their show on New Year’s Eve.

Since then, much has been written to dissect the reasons behind Allen’s announcement, as well as what the Chicago Neos have meant to the theater community of our city for close to three decades. But as the curtain falls abruptly on this first incarnation of “TMLMTBGB” and gets ready to rise on a new one, it’s worth taking a second to say that this show in particular and the Neos in general have been—and will continue to be—a crucial institution not only to performers and theater-goers but also to writers.

Intuition often precedes understanding. The first time I saw a performance of “TMLMTBGB,” I was just sixteen and my intuition told me that I was in the presence of something that wasn’t just engaging and entertaining but essential and life-changing. Sitting in that audience twenty years ago, I realized with amazement that a Neo-Futurist play could be about anything in any genre as long as it adhered to their stated mission of performing each one “from a perspective of complete honesty.”

It took me a few more visits to figure out and be equally impressed by the fact that whatever else they might happen to be, Neo-Futurist plays are unfailingly about experimentation and vulnerability mixed with discipline and stamina.

“TMLMTBGB,” with its focus on brevity and compression as well as truth and true stories, has shown generations of Chicago writers—aspiring and established—an indispensable and accessible model for how to do both poetry and creative nonfiction in a way that really matters.

Equally admirable is that the methodology of “TMLMTBGB”—thirty plays in sixty minutes for three performances every weekend with several new plays added each week—is a thrilling example of how to take pleasure in cultivating a stunning work ethic. “TMLMTBGB” taught me not to mystify the source of my own written work as some kind of precious “inspiration” brought on by some capricious “muse” but as something that would get stronger and better the more I used it.

The other day at a holiday party, a friend asked me what I was most looking forward to in 2017. She said that her own answer was “Nothing” because of how dispirited and horrified she was by the fascistic Donald Trump. I saw her point and struggled for a minute to come up with a non-cynical answer. But when I did, it was two words: the Neos.

As a writer and a fan, I can’t wait to see what the Chicago Neos—and the ones in New York and San Francisco—will do next. Given their talent, humor, compassion and hard work, there can be no doubt that the ensembles will rise like phoenixes from the ashes of Allen’s lukewarm ego and continue to be the vital, vibrant, democratic and inspiring part of our city that they have been consistently for the past twenty-eight years.

Whatever format their new late-night offering ends up taking, I predict that it will still give me—and countless other admirers—the feeling that always seems to hang in the air like the best kind of weather at the end of every Neo show: Now let’s all get out there and make some art.