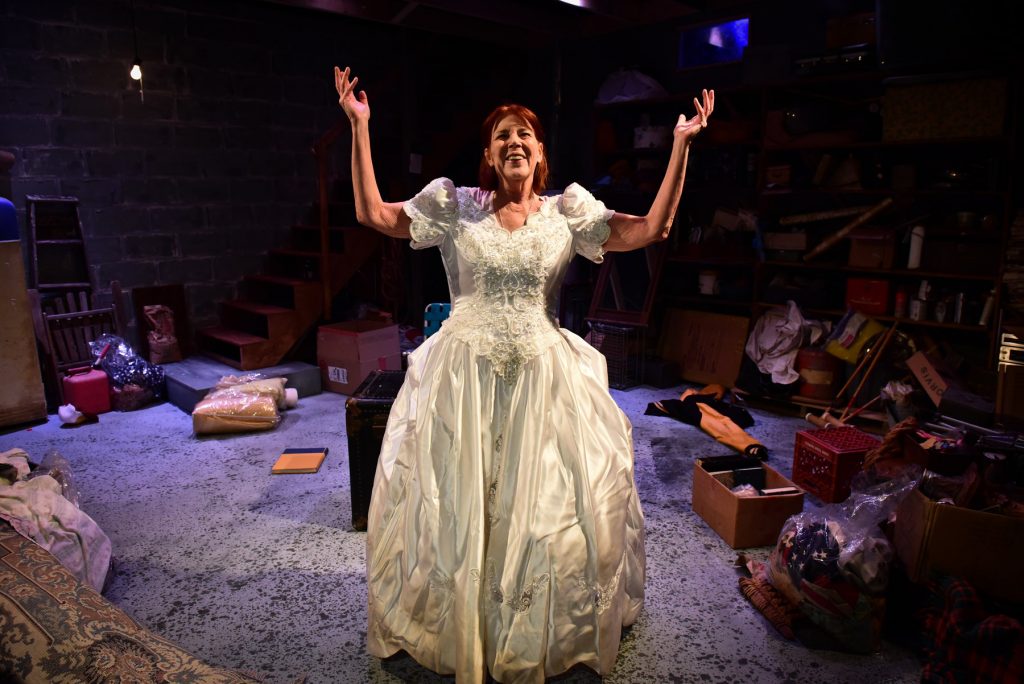 Opening during inauguration week, Brett Neveu’s new one-woman play is both intensely personal and implicitly political. In depicting one bad day in the life of his middle-aged, working-class, going-nowhere protagonist, Neveu reveals the bleakness and confusion that have led us to our present predicament.

Kate Buddeke gives a tour de force performance as the beaten-down, self-effacing Lori, who finds herself trapped in the basement of her Iowa home amid the random detritus of an unspecial life, made bearable by ritualized faith and an ugly and pathetic pretense of racial superiority. Stage center is a battered and mysterious old trunk, which she talks to like an old friend.

The Iowa-bred Neveu knows of what he writes and has succeeded in creating a character who seems very real both in outward detail and inner, ambivalent essence. Director Linda Gillum allows Lori’s guilt-haunted, meandering monologue to unspool slowly and naturally. The narrative gains momentum as we begin to guess what might be inside the locked trunk that is her shadow self. And it ends with a gothic twist, befitting a tale of decay and the subtle horror of lifelong conformity.

The script is smooth and tight, as is every element of this production, including Grant Sabin’s dingy masterpiece of a set and costume designer Christine Pascual’s ensemble of mismatched sweats, the objective correlative of Lori’s low self-esteem.

For all its technical proficiency, though, the show lacks cathartic emotional impact. We see Lori, a character defined by her limitations, and we feel for her stifling sense of powerlessness. But drama is about action and Lori, who is pure victim, cannot act in a self-directed way.

The impotence of Lori and her men—their inability to comprehend or confront the forces that have turned their once-proud town into a place without a future—is the real message of “Her America.” It is impotent people who are drawn to a politics of resentment and despair. When the defeated Lori talks about the “lost-life look” of her neighbors and we see the fragility and disconnection of the characters, we realize that Neveu may have written the first play of the new political era. It is a significant accomplishment, if a depressing one. (Hugh Iglarsh)