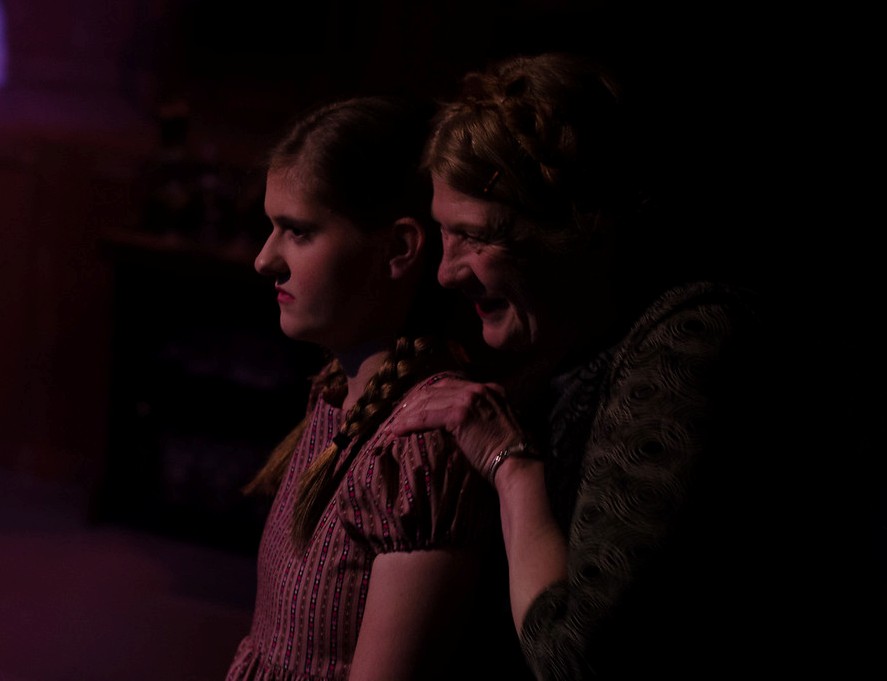 In the classic locked-room mystery, the murderer is at large in a closed system, the suspense entwined in the relations among a fixed set of suspects. In Shirley Jackson’s novel “The Sundial,” vicious matriarch Orianna Halloran, who does not deny pushing her only son down the stairs in order to secure her sovereignty over the Halloran property, closes the door herself after his death, keeping her servants, sycophants, suspicious relations and dotard husband claustrophobically near.

Cloistered in the Halloran walls is an Edenic space, scrupulously tended yet eerily savage, chiseled over with faintly threatening aphorisms: “WHEN SHALL WE LIVE IF NOT NOW?” arches over the stairway; “WHAT IS THIS WORLD?” is inscribed upon the sundial the first Mr. Halloran acquired for the lawn. Paul Edwards’ adaptation of Jackson’s novel, the third such to be presented at City Lit, brings the peculiarities of Gothic fiction set in 1950s America to life with keen tension—its meticulous decorum ruptured by nastiness, bizarre supernatural visitations and plot holes galore.

In “The Sundial,” the murder is merely incidental, an absent body that casts the shadow looming over the ensuing scenes. The action begins when Fanny (Morgan McCabe), maiden aunt of the deceased, meets her dead father (Edward Kuffert) in the garden one morning and he prophesies unspecified danger that will wreak destruction on all who exist beyond the borders of the estate. Though maiden aunts are generally dismissed as hysterics in this new world order steered by Orianna (a crisply imperious Sheila Willis), the hatches are battened with blankets, the books in the library are burned, the boy scout manuals are bought and the peach pie with chocolate ice cream is bolted down, because the end of days is coming and the Hallorans, their usurpers and their hangers-on insist on abiding to repopulate the planet.

The characters are hard to like and yet, with dialogue Oscar Wilde could have penned, their despicability is transformed into a delight. “I have not deserved this!” mewls governess Miss Ogilvie (Christina Renee Jones) after Orianna decides she must leave the house. “You must allow me my impulse of generosity,” Orianna replies, radiant. (Irene Hsiao)