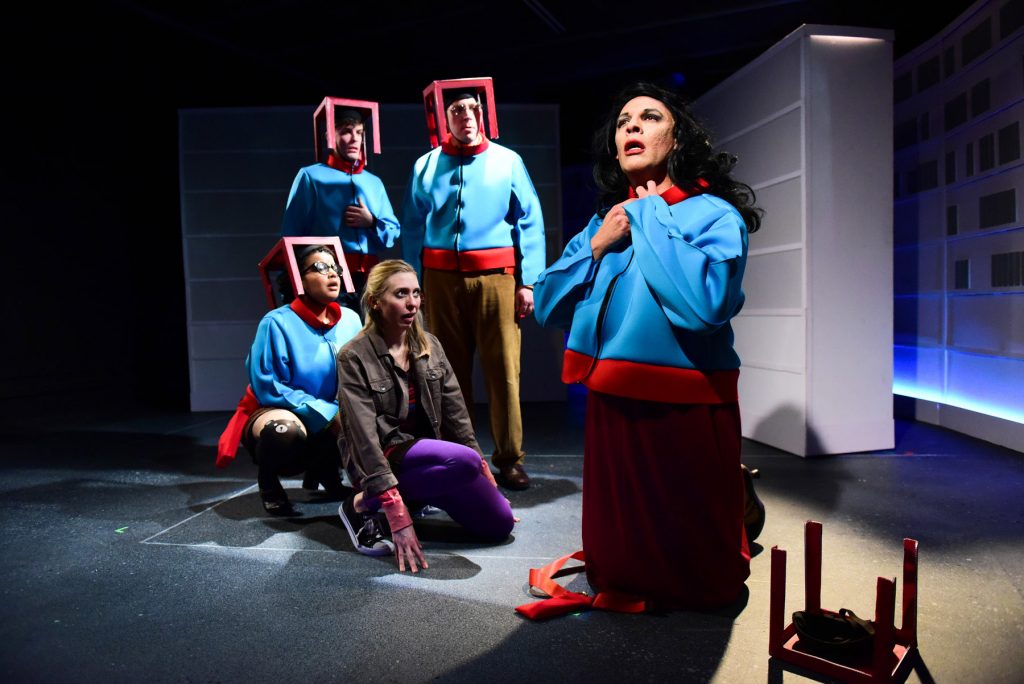 Garnished with camp, theatrical magic (finger puppets are a crucial plot point) and a story of coping and love filtered through an allegorical fantasy, “Psychonaut Librarians” has  echoes of “Labyrinth” and “The Pagemaster” but still manages to very much be its own beast.

Hester (David Cerda) kidnaps her daughter Jane (Christine Mayland Perkins) and steals her away to the library, evading her ex-husband who is looking for custody. While there, Jane dreams up Dewey (Matt Farabee) and falls in love. But evil lurks around the corner and soon Jane’s under a spell of fear. This is when the eponymous librarians (Morgan McNaught and Michael Peters, who sparkle with chemistry) drug her. This is also when playwright Sean Kelly and director Krissy Vanderwarker set fire to conventional notions of “good theater” and turn up the heat from light flame to boil.

McNaught, Peters and the security guard (Carlos Olmedo) are perfect agents of change. They transfigure the space into a whiplash-quick trip through hallucinatory stacks of books. They match Cerda’s absurd factor and raise it a bar. Peters’ fastidious bookworm and Olmedo’s bumbling charm are both strong presences and McNaught is the anchor that keeps them both grounded. These three (and Cerda) are necessary forces. They play an important counter to Jane’s tendency to wax poetic, which in early moments can feel heavy and easy to get lost in. When paired with the ridiculous though, these moments become beautifully poignant and nostalgic.

“Psychonaut Librarians” recalls simpler stories. The morals are clear (love and imagination are virtues). The characters, despite their specificity, are relatively straightforward, and have more in common with myth than a Broadway play. However, the energy can veer toward saccharine and the librarians’ plot is sort of unclear. Despite the caliber of Cerda’s performance, there’s no reason the part couldn’t have been played by a woman or trans woman.