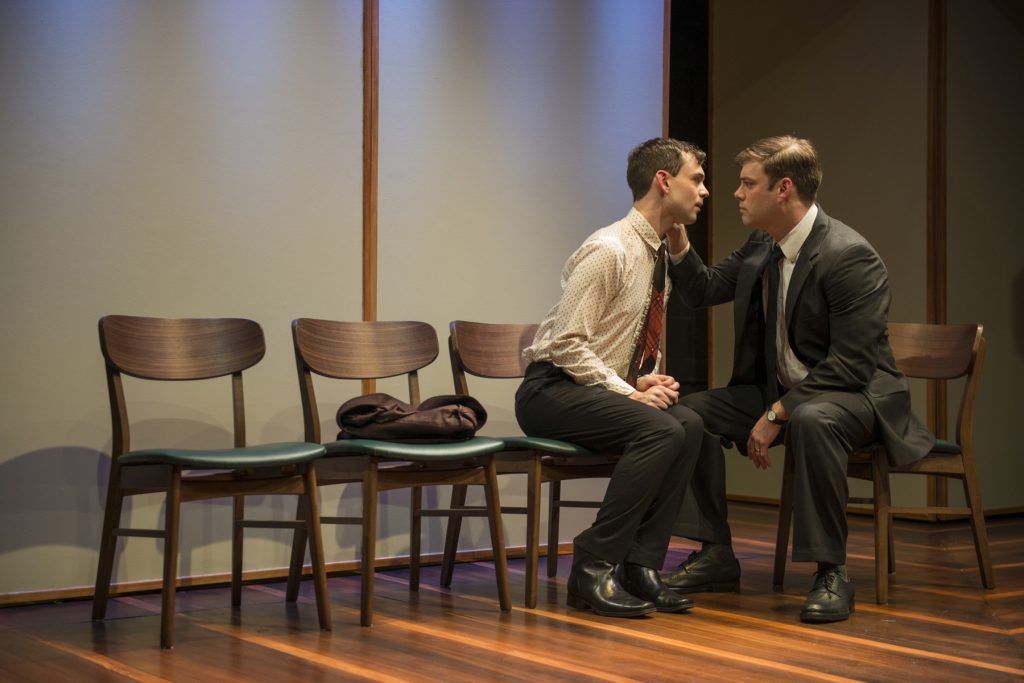 In a gesture whose real and symbolic significance cannot be misunderstood, the White House website removed all reference to LGBT rights after the swearing in of Donald Trump. This type of deliberate erasure is of paramount concern in Jon Marans’ “The Temperamentals,” which focuses on the founding of the Mattachine Society, the first sustained LGBT rights organization in the United States. Far more riveting than rosy notions of so-called greater times, the Chicago premiere at About Face Theatre is a tragically timely reminder of the perilous arc of history and the necessity of bravery in the face of oppression and cultural ambivalence.

In addition to charting the tumultuous early history of the LGBT rights movement, Marans’ play also concerns the romance between two of its founding members: activist Harry Hay (Kyle Hatley) and fashion designer Rudi Gernreich (Lane Anthony Flores). Hatley and Flores are joined by Paul Fagen, Rob Lindley and Alex Weisman who gamely play a variety of characters from Bob, the sad clown, to Harry’s own mother. In the spirit of the queer comedies made possible in part by their efforts, Marans’ characters make generous use of double entendre, word play and the lexicon of musical theater all while drawing parallels between the experiences of homosexuals and the persecution of the Jews, African Americans and communists. Charged with recreating a variety of locations, Joe Schermoly’s set is versatile in its simplicity, easily suggesting the rigid formality of a courtroom or the ease of a neighborhood diner.

That being said, “The Temperamentals” has some significant flaws. The second act meanders before abandoning formal storytelling altogether for gut-punching exposition. As written, Harry Hay comes off as a bit of a windbag and Kyle Hatley’s tendency to go big on the relatively small stage at Theater Wit exaggerates this characteristic. Hay is at times almost too prescient in his beliefs, his inner conflict consistently overshadowed by his self-confidence, which ultimately makes him one of the least compelling characters on stage. More egregiously, women are essentially invisible (in the only scene they appear in they’re represented by male cast members in drag), black culture is diluted by white tears and casual bigotry is treated as a punchline.

If audience members are able to see past these issues (and some understandably won’t), then the play’s essential message will ring loud: the battle for equality is far from over. Still, I think Hay and company would be pleased at the visibility, viability and verve of this new generation of temperamentals. (Kevin Greene)