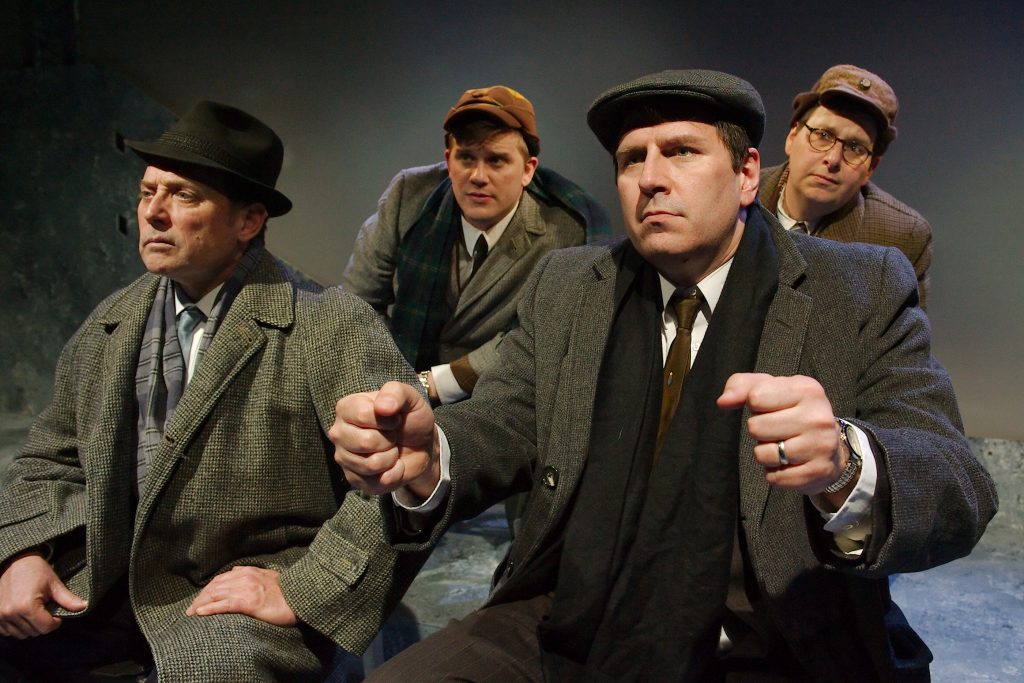 The plot of “Blizzard ’67,” built around the monster winter storm that paralyzed Chicago fifty years ago, would not be out of place in a classic Western. Neither would its rigidly macho protagonists. The play is about what happens when the rules of civilization are snowed under and character is revealed. Stripped down to essentials, the men display not true grit but rather false bluster and panicky emptiness, which would seem to be the playwright’s comment on the American male condition, at least in his father’s generation.

Using four chairs, four talented actors and copious imagination, director Ann Filmer and her stellar design crew transform a tiny basement space into a series of convincing environments, including suburban homes, a downtown office, a neighborhood bar and the aging Ford Falcon that transports the carpooling colleagues between these settings. A combination of conventional dialogue and story theater-style narration pulls us into the graceless, testosterone-driven interactions of the men, all mid-level functionaries of a large corporation, as well as the not-so-quiet desperation of their inner lives.

Fueling the angst is the recent promotion of Henkin (played by Stephen Spencer, who situates his portrayal right on the border of charm and arrogance), a move that confirms the sense of futility and unfairness felt by the angry Lanfield (Mark Pracht) and the cynical, self-loathing Bell (Noah Simon). The fourth passenger is young Emery (Christian Stokes), who presses Henkin for the secret to the success he craves but can’t quite define. The volatile mix of envy, rivalry and midlife ennui explodes just as the blizzard hits. A crisis occurs on the snow-choked road, and the men, conditioned to look out for number one, respond predictably.

The play could use more texture. Despite Tony Churchill’s artful projections and Rachel Sypniewski’s dead-on “Mad Men”-style costumes, there is an anywhere and anytime feel to this 1967 Chicago, where no one talks about Batman or the Bears, let alone racial tensions or the Vietnam War. But “Blizzard ’67” succeeds brilliantly as existential parable. By the end, Lanfield’s car feels like the room in Sartre’s “No Exit,” a place where hell is other people, who force one to look at oneself. And that is what theater is all about. (Hugh Iglarsh)