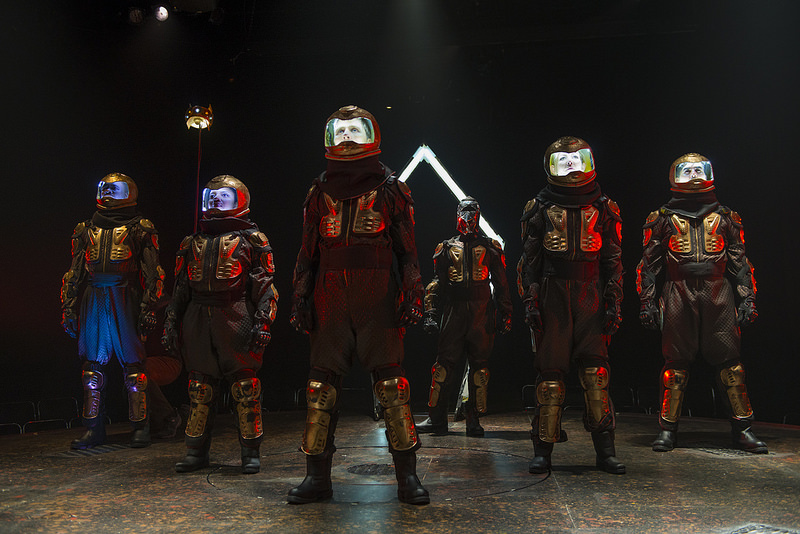 With the inauguration just days in the rearview and a spate of minor—by the skewed (excuse me, “alternative”) standards of this new administration—scandals already in progress, I freely admit that I came to House Theatre hoping for distraction. Instead, what unfolded over the course of two-and-a-half tedious hours was not an escape from the outside but instead a blithely insensitive embrace of it.

“Diamond Dogs,” a half-baked, high-concept sci-fi snoozer, starts checking off problematic boxes quickly and remains consistent throughout. It carelessly (almost gleefully) dispenses with a black female character (one of only two characters of color in the cast) after the white male anti-hero spends the first half of the play verbally assaulting her. Meanwhile the rest of the crew supports his actions through their silent complicity. Later, a smart, capable and industrious female character’s maternal instinct kicks in for her juvenile ex-husband (who, by the way, forcibly suppressed his memory of her) just as she begins to grasp the full extent of his emotional vacuousness. Finally, the play actually expects us to sympathize with a man (by the final twenty minutes, he is more like a diamond-encrusted smartwatch) who is unable to resist the lure of the unattainable and readily willing to sacrifice anything and everyone in pursuit of it.

If there is a case to be made that “Diamond Dogs” is actually attempting to be critical of its seemingly glaring misogyny and thinly veiled racism, it would take some Kellyanne Conway-level spin. The closest we get is a vague line of questioning regarding the morality of the pleasure dome of affluence. However, even this is buried beneath expository jargon and bald stereotypes. At one point, a character suggests that the rest of the team needs to “try harder.” On the whole, I couldn’t agree more.

The message this play broadcasts loudly and relentlessly is that white people are the worst. But the extent to which the original author or the adapting company recognize that this is what they are transmitting is questionable at best. There is little evidence to suggest any sense of self-awareness. In 2017 this kind of artistic and ethical negligence isn’t just disappointing, it’s irresponsible. (Kevin Greene)