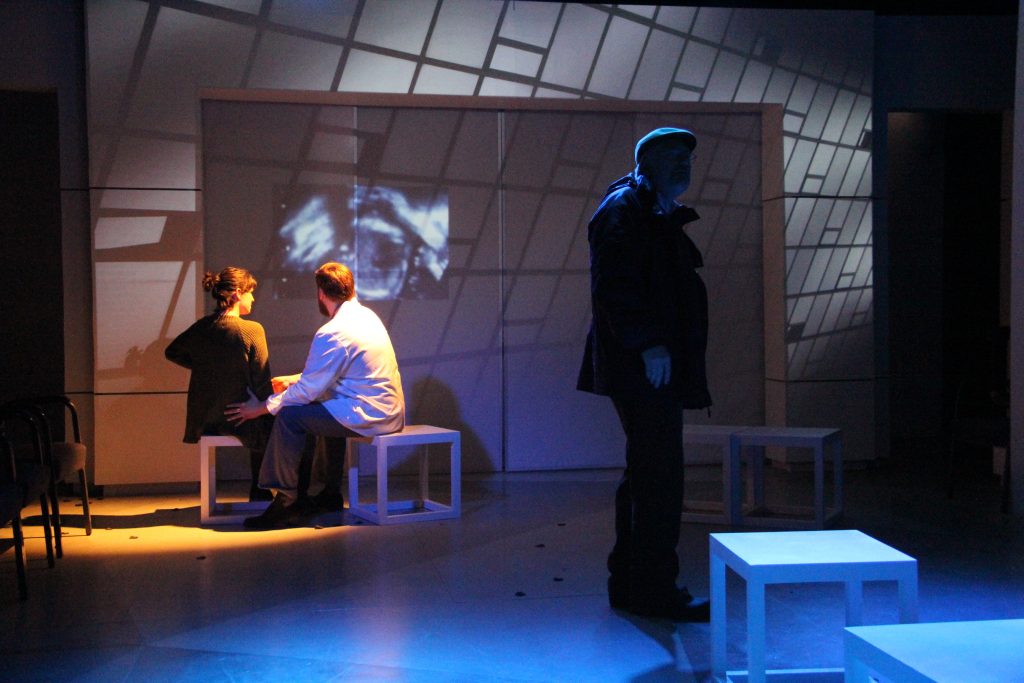 Given its elaborate structure, ripped-from-the-headlines subject matter and gargantuan run time, all signs point to pressing immediacy in Mike Bartlett’s “Earthquakes in London.” And yet, for all its ambition, the play seems uncertain about what it actually is: a cautionary tale? An ecological allegory? A tale of revenge starring none other than mother nature herself? “Earthquakes” is a melodrama about the lives of several moody, mopey Britons on the eve of some kind of global apocalypse. They’re a milieu that may inspire recognition though not much in the way of empathy or insight.

Perhaps this neutral presentation is meant to contrast the epic nature of the play, the utterly asinine living right along the encroaching end of times. The anarchic shifts in tone between the stories of three sisters suggests this possibility. Middle sister Freya (Lucy Carapetyan) goes on a hallucinatory journey through London with a companion (Amber Sallis) who may, at any given time, be any of the following a) a fourteen-year-old boy on the autism spectrum, b) a figment of her imagination or c) her unborn child.

Elsewhere things are more rote. Eldest sister Sarah (Cindy Marker), a high-level government official specializing in the environment, is going through a rough patch with her unemployment, a perfect pairing of banalities. Jasmine (Sarah Price), the youngest of the three, is to “Earthquakes” what Prince Harry was to Bartlett’s “King Charles III” though she never undergoes his transformation from self-destructive narcissist to smitten romantic.

There’s a lot more going on here. These five characters represent only a third of the bodies that move through Steep Theatre’s impressively versatile space. Jonathan Berry directs this show efficiently though with less overall inspiration than last season’s Jeff Award-winning “Posh.” While Berry gets a lot of credit for handling large ensembles, an area in which he is undeniably skilled, “Earthquakes” suggests that his real talent may be in conducting the tempo and dynamics of long, unbroken scenes à la “Constellations” and “Balm in Gilead.”

“Earthquakes” is clearly reaching for profundity though its disparate parts never seem to synthesize into a meaningful whole. The production is not lacking in aspiration and there’s no contesting the play’s relevance. Yet the lack of clear purpose coupled with an indulgence of middle class anxieties surrounding a catastrophe that, for significant parts of the rest of the world, is already in process, grounds “Earthquakes.” (Kevin Greene)