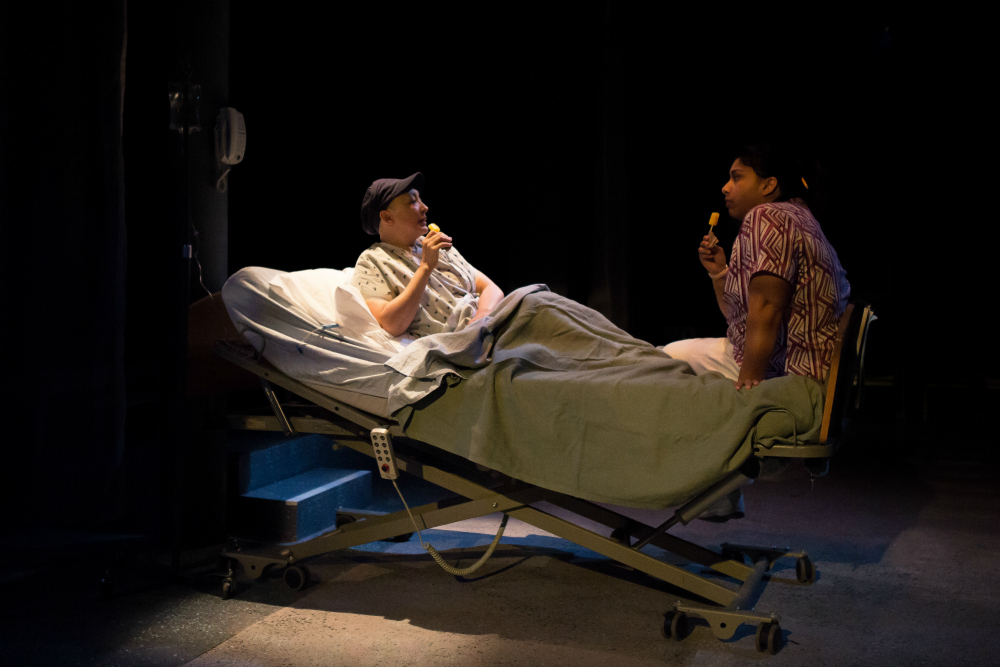 If you’ve spent extended time in academia you know at least one Dr. Vivian Bearing: tough but fair, intelligent yet unpretentious, intimidating yet magnetic. She pushes you hard because she sees your potential. She smiles warmly while you reach for something profound only to lapse into aphoristic cliches and “you know what I mean”s.

But how often do you think of these professors once you’ve left their hallowed halls. Despite their seemingly endless cycles of semesters and research pursuits, they too morph over time, becoming older and more susceptible to life’s little indignities despite increasing mastery in their field. Like it’s lead (played with gut-wrenching vulnerability by Lisa Tejero), Margaret Edson’s “Wit,” winner of a well-deserved Pulitzer Prize, is tough but tender. It lives in paradoxes, where the Holy Sonnets of John Donne live alongside ovarian cancer, described beautifully here as an error in judgment at the cellular level.

Director Marti Lyons is afraid of neither simplicity nor bold action and deploys both with profound intuition. One of the city’s most talented freelancers, Lyons is especially gifted at locating humor in tragedy and vice versa, drawing complex performances from her actors, an essential quality for this play, which jumps between wry wit and devastating pathos.

Whether for lack of rehearsal time or just the nerves of opening week, some scenes do run aground, often in direct relation to the number of actors on stage. At times, it is tough to tell whether Eduardo Xavier Curley-Carrillo’s doctoral fellow is nervous in front of his former professor or if Curley-Carrillo himself is nervous in front of his audience. These moments, along with an in-the-round style of staging that obstructs a few crucial scenes for some audience members, are relatively small bumps though ones that seem to appear more frequently when The Hypocrites go minimalist in the column-laden Heath Main Stage.

I saw “Wit” on the same night that thousands turned out to O’Hare to protest the detention of citizens from Muslim-majority countries in the Middle East. In contrast to this deplorable executive action, of the nine actors in “Wit” (cast by Lavina Jadhwani at The Chicago Inclusion Project) the majority are persons of color, playing working professionals, ambitious students and PhD professors.

This kind of inclusion-oriented casting is not new for The Hypocrites. Yet it is now, more than ever, an act of political defiance. Many of us learned a hard lesson about taking the easy way this past year and its dramatic costs. Yet both this play and its production can be a lesson as we move forward: there is always more to do. (Kevin Greene)