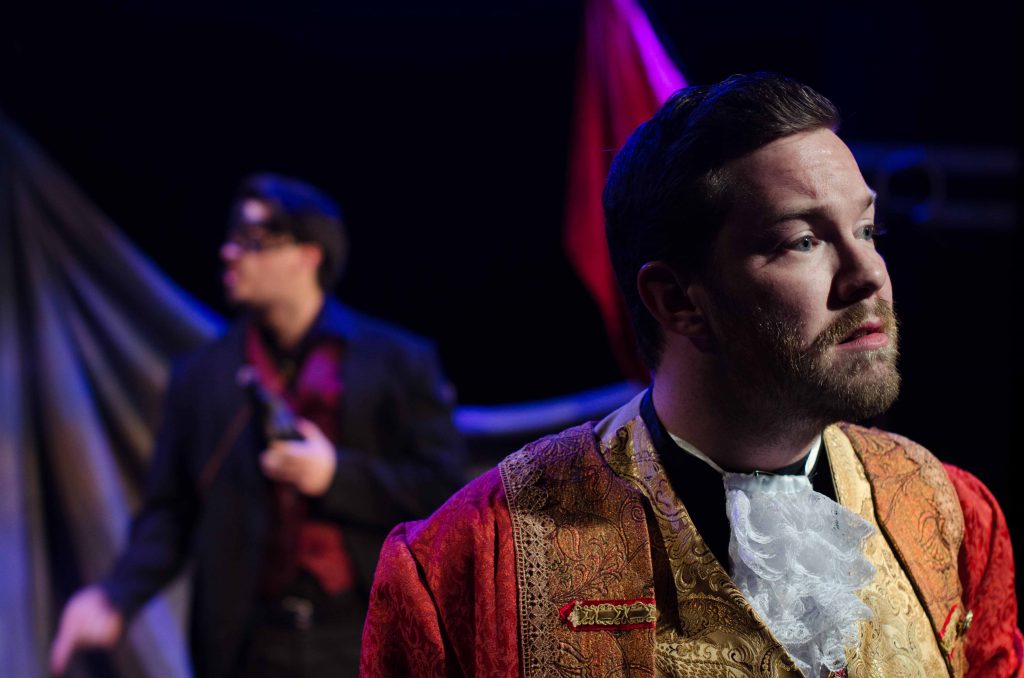 Surely Shakespeare’s most mediocre play, “Cymbeline” contains banal characters, unmemorable lines and a plot that seems devised by hyperactive teenage aficionados of tragical-comical-historical-pastoral fan fiction on a bath-salts bender. Yet Strawdog Theatre Company’s production, directed by Robert Kauzlaric, manages to make good sport out of unspectacular material, with a talented cast that relishes the silliness of the play as if it were the Bard’s most luscious verse.

The play begins, like so many others, with star-crossed lovers—here the virtuous Imogen (Daniella Pereira) and her wholesome consort, the infelicitously named Posthumus (Sam Hubbard)—forced to part because he is penniless and powerless and she is a princess whose disapproving father, Cymbeline (Brandon Saunders), is a tyrant slowly being poisoned by his evil second wife, designated merely “Queen” (Sarah Goeden). Crimson-lipped and tightly corseted, the Queen, who has long practiced dark arts, comes with a little baggage of her own: a son, Cloten (Gage Wallace), who has been overexposed to alchemy and underexposed to courtesy. She wants to marry him to Imogen because every woman in a system of primogeniture must desire a kingdom for her son. This is all before international conspiracy, war with Rome and several uncoordinated horseback jaunts to Wales. Can we say “Real Housewives of the Middle Ages”?

As in reality television and bad romances, the villains steal the show in “Cymbeline,” especially the clueless churl Cloten, whose every appearance has his eyebrows arching into the firmament as he bellows his lines with a cadence no musician would recognize (this sounds terrible but Wallace makes an art of it). Yet Pereira’s Imogen has the spunk to sass him back. The ensemble work is strong—Terry Bell and Dan Cobbler are charming as long-lost brothers and Michaela Petro is a pert commentator as the put-upon Pisanio. Strawdog makes much of the space in The Factory Theater, where crates and fabric equally become opulent palace and wilderness. (Irene Hsiao)