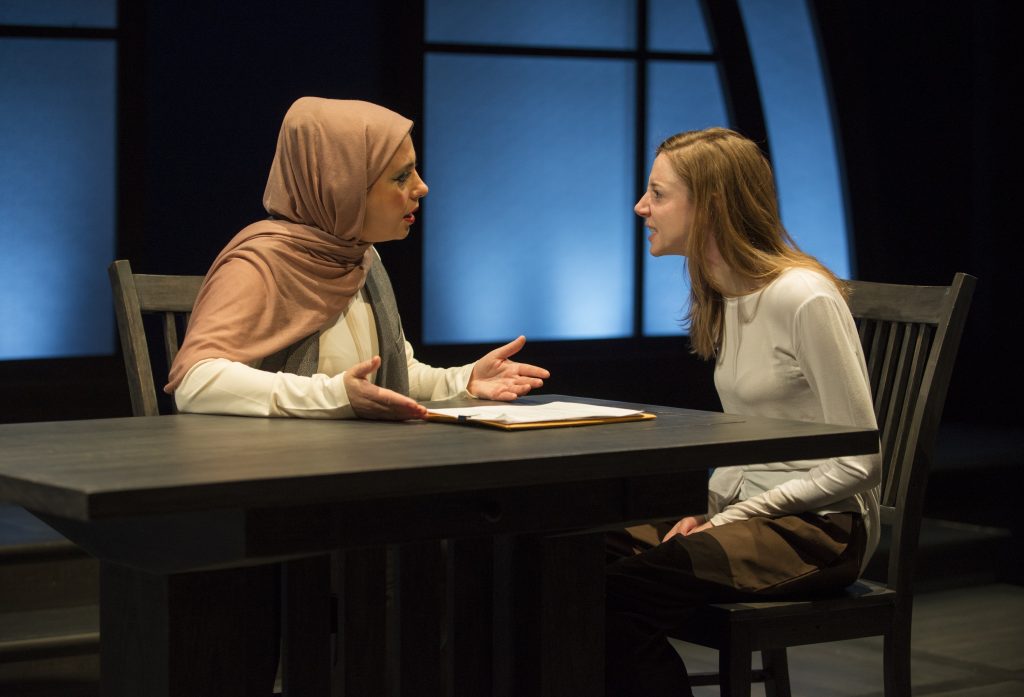 Although maybe not so great for America, a Trump presidency will likely be a boon for the theater world as a whole new wave of artists can be expected to explore how race and religion factor in an increasingly totalitarian world. Presented as a world premiere at Northlight Theatre, Selina Fillinger’s “Faceless” will likely serve as a benchmark for what this type of drama is capable of achieving.

Directed by BJ Jones, “Faceless” presents two visions of Islam as expressed by the characters Claire Fathi (Susaan Jamshidi) and Susie Glenn (Lindsay Stock). Susie, an eighteen-year-old white suburbanite, is a recent convert to Islam. Preyed on by an online recruiter, Susie is arrested while attempting to join her suitor in ISIS-controlled Syria. Claire, a Harvard Law School graduate and federal prosecutor, is selected to help with the prosecution in no small part due to her outward Muslim appearance. At first Claire refuses but then relents when confronted with the idea of this clueless teenager being the face of Islam.

Stock excels in her portrayal of the vulnerable Susie who appears to want nothing more than to be accepted as a real Muslim. Playing opposite her, Jamshidi’s Claire is an uncompromising woman whose faith, discovered later in life, makes her a stronger person. We are told early on that there is no savior in Islam and therefore each person is responsible for making the world a better place. Throughout the play, Claire grapples with whether her attempt to hold Susie responsible for her actions will actually result in a positive outcome. Ultimately it is this personal struggle that allows for Claire to grow as a person.

BJ Jones directs a production that is as compelling to look at as it is to discuss. The quick pacing allows for a sense of authenticity and Stephan Mazurek’s clever projection design (projected texts and brightly colored emojis) perfectly captures Susie’s online world while a creepy ISIS recruiter is seen only as a shadow hiding behind a screen. As relevant as the plot is to today’s political world, the timeless themes of identity and discovery offered here will undoubtedly resonate well past the current president’s term. (Noel Schecter)