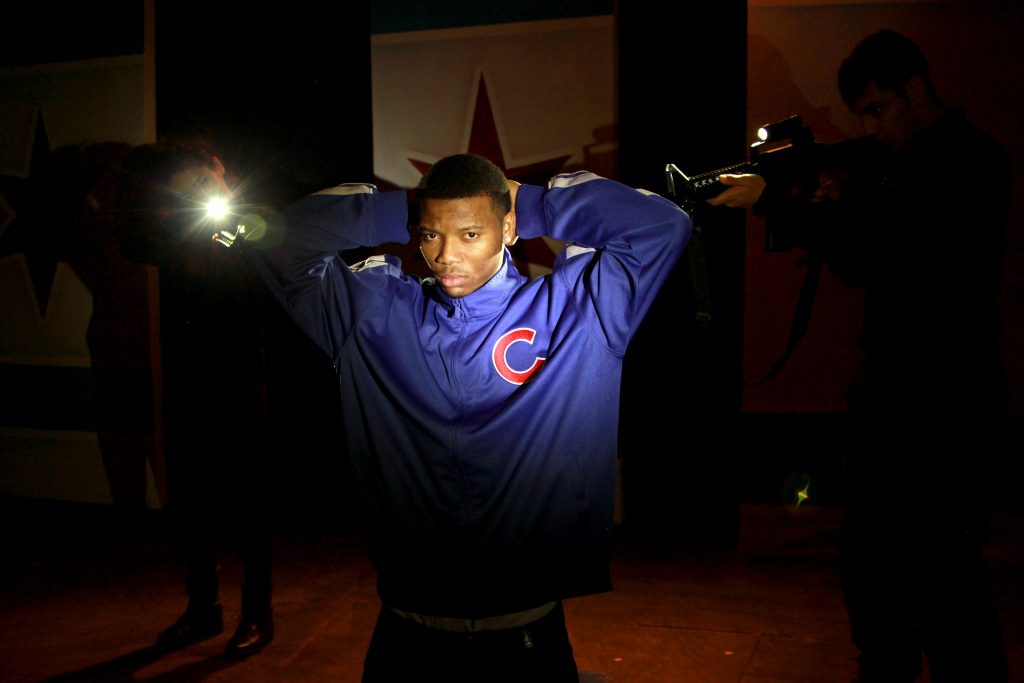 The immediate relevancy of the world-premiere production of “By Association” by Shepsu Aakhu is chilling. Where the current battle cry of our nation is “no ban, no wall” in response to a presidential executive order temporarily banning the entrance of immigrants and refugees from seven Muslim-majority countries, this play is a potent examination of the issues immigrants, particularly Muslim-American immigrants, regularly face.

“By Association” follows Abdi (Kejuan Darby), who, at just sixteen years old, is the subject of a federal manhunt when his best friend Omar (Abdu Hytrek) is accused of planting a bomb below the Illinois State Building, killing several Chicagoans including Omar himself.

What connects the two youth—their Muslim faith—is now what vilifies them. With Omar dead and Abdi now at the center of this terrorist attack, Abdi’s parents Joseph (Benjamin Timothy Jenkins) and Almaz (Katrina Ri’Chard) try to find ways to protect him from a persistent government agent Jackson (Eddy Karch), intent on protecting America from acts of terror at any cost. As a result, Abdi’s brother, Sabona (Tamarus Harvell), becomes collateral damage. All the while, the entire journey is documented by Reporter (Zhanna Albertini).

The simple staging by director Lauren Wells helps focus our attention on the pain, confusion and fear of the characters in front of us. Each actor on stage gives a heart-warming and truthful performance, lending both integrity and complexity to the immigrants who struggle with these issues every day.

The show is not without shortcomings. It never becomes clear why Abdi’s parents were willing to put his brother’s life on the line in order to save his. At certain times while the actors are speaking, the music became melodramatic. Nevertheless this play contains a perspective worth giving a chance.

Abdi’s  mother, who is an Ethiopian immigrant, laments at one point, “I always keep two travel bags under the bed for moments like this.” In light of recent events in America, she may not be the only one. (Loy Webb)