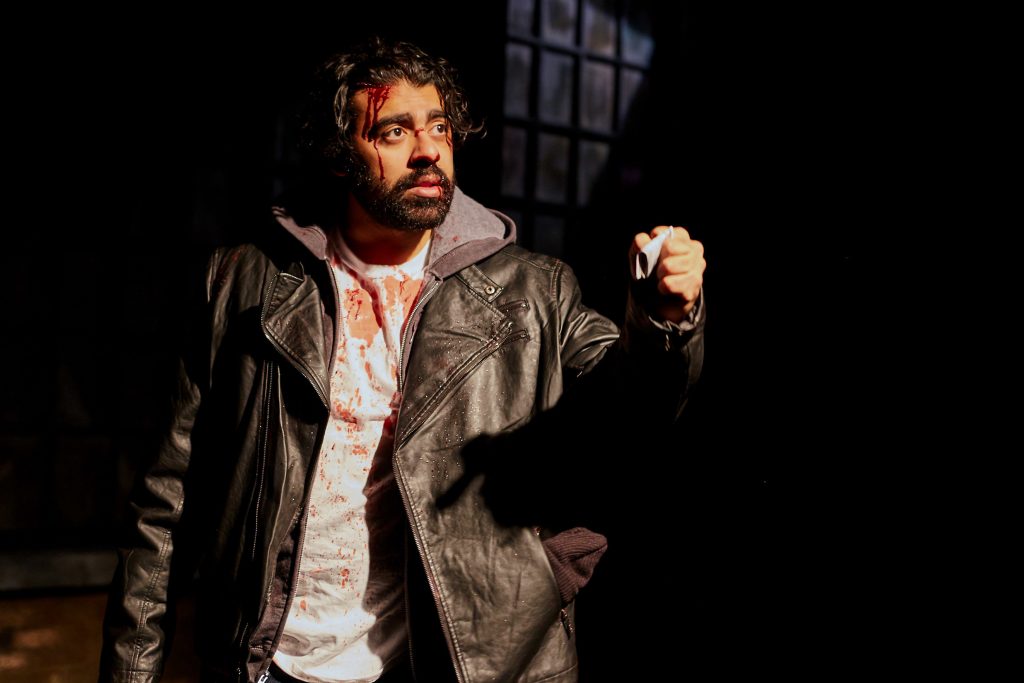 Throughout Ike Holter’s “The Wolf at the End of the Block,” the characters make repeated reference to “Them.” And while Holter has clearly been influenced by comic books and superhero flicks (see: last year’s “Prowess”), “Them” is not an acronym for a shadow organization bent on global takeover. “Them” is white people. It’s me. It’s the cop on the corner. It’s Hillary Clinton. Maybe it’s you, too. Holter uses this shorthand to talk openly, frankly and unapologetically about race, ethnicity, truth, impunity and reality. At just under ninety minutes, “Wolf” is as close to a complete portrait of our current state of social and political disarray as any play I’ve seen claiming the catchall tag of relevance in the past several years.

Part of that is due to its setting. “Wolf” is the fourth in a planned seven-part Chicago-set series and the rewards for locals (even if you’re from Evanston, bruh) will be plentiful. In Holter’s tool belt are hilarious one-liners (“Y’all dramatic as fuck on a weekday”), historical insight (“Rosa Parks wasn’t even Rosa Parks”) and moments that will leave you little more than a puddle in your chair. The stunning mid-show monologue from Gabriel Ruíz is a good example of the latter but Holter keeps the emotional undercurrent running throughout his play to the point where even the barbs of his humor are dipped in the poison of anguish.

Holter’s style takes some acclimating to, like learning how to breathe miles above sea level. His dialogue is relentless and diamond sharp. To a casual ear it may not sound “natural” and that’s because it isn’t, at least not in a theatrical era that prizes realism. He has developed his own free-standing universe that adheres to its own laws. If The Roustabouts from “Prowess” were The Avengers, then Ruíz’s Abe is more like Batman, deeply flawed and self-involved yet given to acts of extreme charity for those who need it most and revenge against those symbols of oppression. Yet not unlike “The Dark Knight,” there is the question in “Wolf” of what evil is exactly. Symbols are easy to point the finger at but Holter’s play suggests that the real culprit is an insidious hegemony, a kind of thought control that would make fictional evil villains raw with envy but is in fact wielded with exacting force in the play and the world it reflects. As Sandra Márquez’s Frida bluntly points out, it works because we believe it.

Holter teases out a complex web of relationships between black and brown, working class and white collar, cop and citizen. Each new scene and revelation muddies the water of partisan politics. Directing Holter’s characteristically meaty scenes with confident assurance, Ricardo Gutiérrez has assembled a simply flawless cast that includes Bear Bellinger, Ayssette Muñóz and James D. Farruggio in addition to Ruíz and Márquez. Muñóz, already a Teatro Vista regular, brings an unpredictable emotional energy. Bellinger delivers the biggest laughs. Farruggio is utterly and terrifyingly convincing. Sandra Márquez may or may not be Cyclops but either way she is capable of burning a hole straight through you with nothing more than her unblinking stare. And yet everything falls away when Gabriel Ruíz is onstage. He is better because of his excellent castmates yet he is also singularly captivating as a man stretched to his physical, mental and emotional limits.

“The Wolf at the End of the Block” is Ike Holter’s most urgent work to date and his most affecting since “Exit Strategy.” It is a play that deserves to be seen, engaged and grappled with. To call it “timely” would be a disservice as the themes and subjects herein are nothing new. It’s just that they are rarely spoken as honestly or as poignantly as they are here. (Kevin Greene)