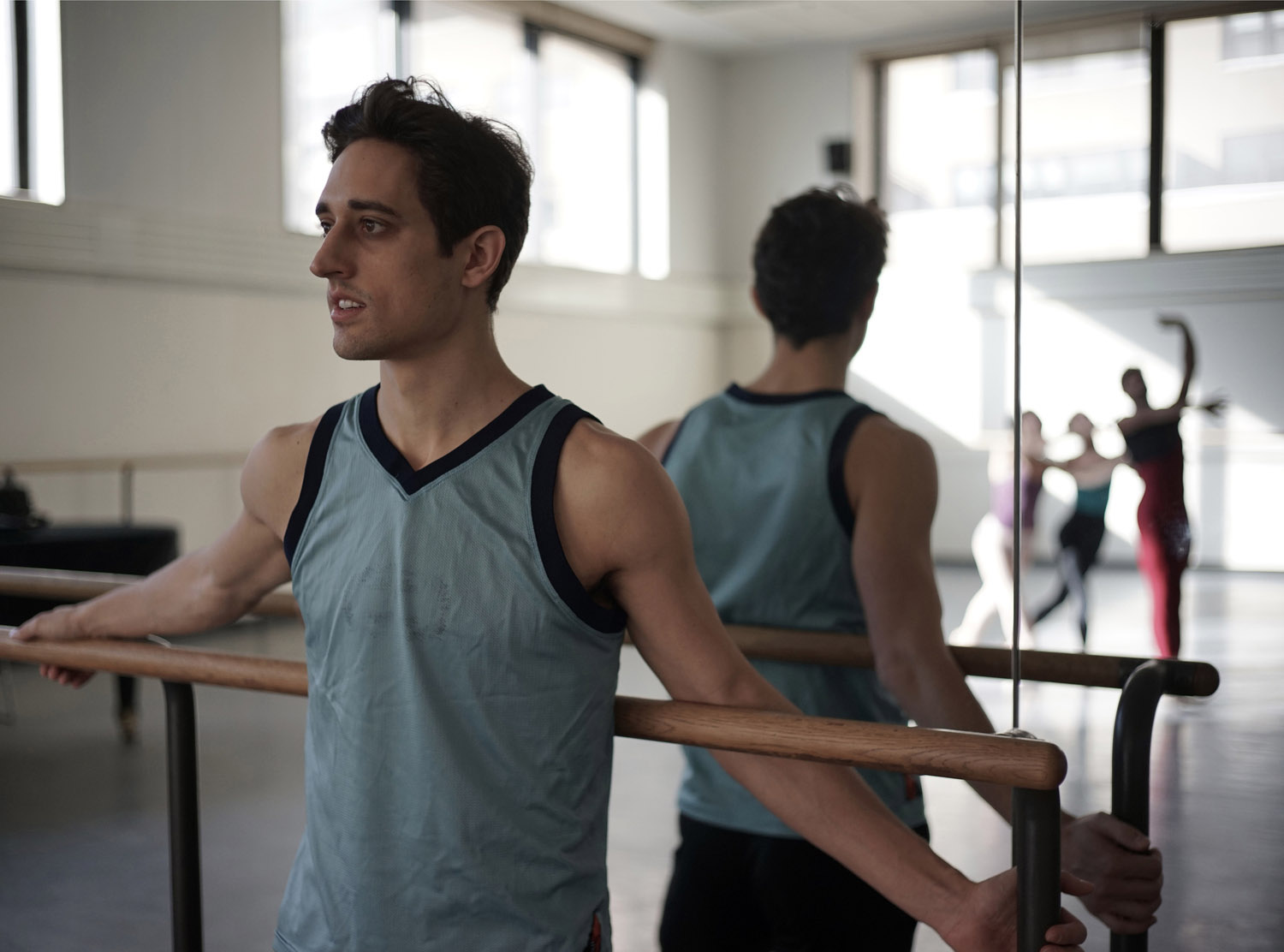 Ask the average Jane Shoulderbag on the street to name a famous ballet choreographer, she might well have difficulty doing so. Ask her to recognize one from a list, Jerome Robbins or George Balanchine would likely spark a glimmer. It’s safe to say that in a year or two the name Justin Peck might have a similarly familiar ring. At the tender age of twenty-nine, Peck is at the top of his field, the second-ever resident choreographer for New York City Ballet and the subject of the 2014 documentary “Ballet 422.” Peck’s 2012 ballet “Year of the Rabbit,” a collaboration with composer Sufjan Stevens, is part of the Joffrey Ballet’s “Game Changers” program, playing February 15-26 at the Auditorium Theatre. “Rabbit” appears alongside Wayne McGregor’s emotional and muscular “INFRA,” a response to the 2005 London subway bombing, and “Fool’s Paradise” by Christopher Wheeldon, whose Joffrey-commissioned “Nutcracker” is still enjoying the afterglow of packed houses and long ovations. Peck’s work comfortably stands on equal footing to these contemporary heavy hitters. In a few short years he has become widely acknowledged as a master of the form, building on a ballet foundation with an authentic expressive freedom and experimental spirit that seamlessly melds classical structures with contemporary aesthetics.

Take the collaboration with Sufjan Stevens. Stevens had never expressly written music for dance or theater before Peck courted him for a project, asking if he’d rework his song cycle “Enjoy Your Rabbit” for a ballet. The music was first adapted for string quartet, then ultimately for string orchestra as Stevens and Peck experimented with the marriage of sound and music. In a phone interview, Peck tells me the process was trial and error, maintaining the clarity of sound of the strings while demanding musicians employ unorthodox techniques to achieve the percussive sounds that drive Stevens’ score. On stage, a corps of eighteen dancers in powder blue, the women in pink tights, travel against a simple backdrop with hands linked, the geometric patterns and classical lines right at home in Stevens’ soundscape.

Pulling accomplished artists into fruitful theatrical collaborations seems to be one of Peck’s great pleasures and talents. He says, “One thing I’m really psyched about is how dance can be a meeting point where different mediums contribute to the final piece. I had Shepard Fairey [the street artist made famous by his Obama campaign posters] design the set for a piece I did for the Miami City Ballet a few years ago. He’s a well-recognized street artist who designs beautiful backdrops but has never worked in dance or theater before. It turned out to be a great outlet for him.” This cross-pollination of top young artists can not only invigorate ballet, but may also pull new audience members into venues like Lincoln Center and the Auditorium Theatre. “Heatscape,” the Peck/Fairey collaboration, was both reviewed in the New York Times and listed in Artforum. As I was watching clips of “Year of the Rabbit” online, my folk musician/roommate’s ears perked and he asked what I was listening to.

Had my aspiring DJ/college boyfriend been in the room when I was watching the promotional video for “The Times Are Racing,” Peck’s recent collaboration with famed electronica composer Dan Deacon, I would doubtless have heard the same question. These promotional videos, exquisitely produced courtesy of the New York City Ballet, are worth a mention and a YouTubing. “The Times”’ promotional video is a standalone piece of entertainment, featuring Peck and fellow company member Robert Fairchild in matching hoodies, blue jeans and white sneakers leaping, tapping, waltzing and banister-sliding through a New York City subway station in an uninterrupted, traveling three-minute shot. Dance, architecture and videography equally contribute to a product that could be considered a music video, dance video or indie short, with the subway station serving as the protagonist and closing on a wry, punchy ending. “NYC Ballet has built the platform to do those kinds of projects,” Peck says. “And I think it’s important to reach people through those mediums, considering the internet is how so many people get information. If we can have a presence in those worlds I think it’s important.”

“Year of the Rabbit” is the second Peck ballet the Joffrey will perform, the first having been his “In Creases” in 2015. During our interview, Peck compares developing a love of dance to a taste for wine. “The first time you try a glass of wine in your life it often doesn’t taste good,” he says. “But over time your taste develops, the palate expands and it becomes pleasurable and rewarding. I think the same goes for ballet and dance. I think the palate can be trained; it requires commitment but can be rewarding.” The flight of flavors presented in Joffrey’s “Game Changers” is an enticing introduction for the ballet novice and a rewarding range of flavors for the connoisseur.