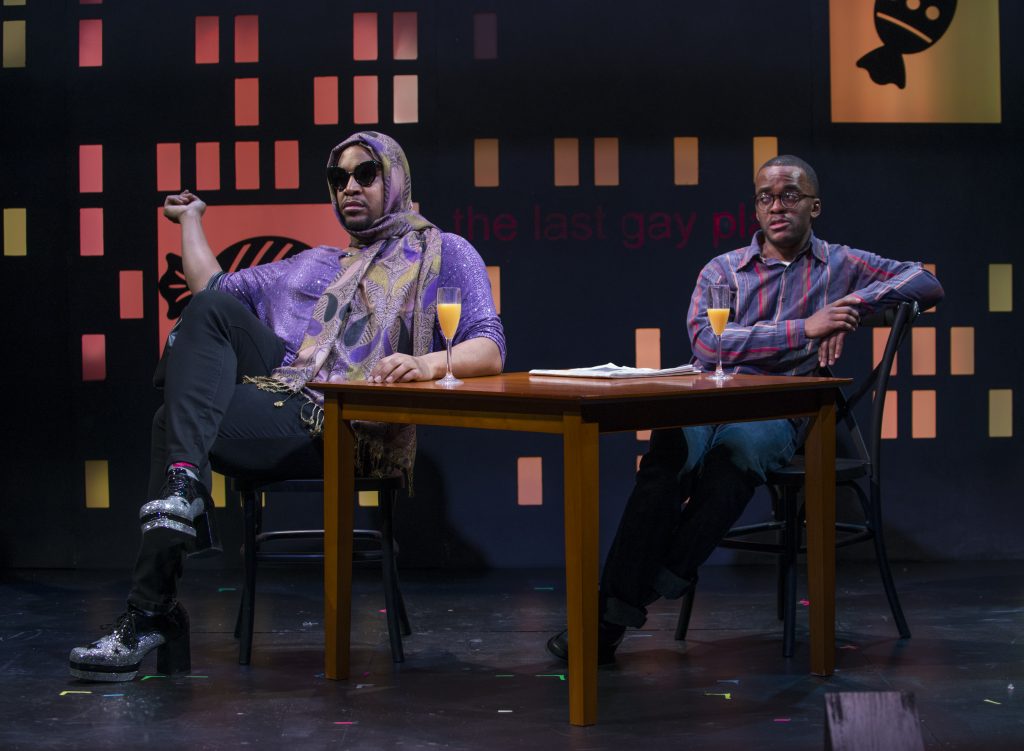 In a pop-cultural landscape dominated by corporate megaliths and sanded-down franchises—look no farther than the succession of B/B+ movies churned out by Marvel Studios on a semi-annual basis—it can be startling to encounter a work of art that speaks so defiantly in its own voice, especially when that voice is dirty as hell.

Enter Robert O’Hara, a New York-based playwright and director, and his play “Bootycandy,” which is currently receiving its Chicago premiere at Windy City Playhouse under O’Hara’s own direction. The play is a jumbled-up, scatter-brained bildungsroman so raunchy, filthy and unabashed that it might be offensive if it weren’t so whip smart.

“Bootycandy” is a series of sketch-like fragments, bits, riffs and clever observations—about race, sexuality, god, loneliness, ignorance, theater, you name it—that eventually coagulates into something resembling a story. The play is (for the most part) about a young man named Sutter (Travis Turner) trying to grow up both gay and black in this infernal madhouse of a country, of a world. Surrounded by a rotating cast of characters played by Krystel McNeil, Debrah Neal, Osiris Khepera and Rob Fenton, the play is not the story of Sutter’s journey—instead it’s kind of a slow unveiling, a striptease in which more and more of him is revealed.

A lot of the play could be described “post-subtextual,” which is just a fancy way of saying that O’Hara skips the innuendo and gets right to the heart of the matter at hand, whatever it may be. For instance, the play isn’t two minutes old before we learn what “bootycandy” is: it’s the word that Sutter’s mother uses to describe his penis. (“Why?” he asks. “I guess because it’s candy for the booty,” she replies.) Another scene, in which Sutter sleeps with his old friend slash brother-in-law, gets right down to business. The two don’t so much flirt as they trade statements of erotic intent.

Performed on a stripped-down, cabaret-style set (designed by Katie Bell Kenney), “Bootycandy” is never coy and (almost) never pretentious. Instead it is loud, and raucous and crass and defiant—oh, and it’s also uproariously funny. (Alex Huntsberger)