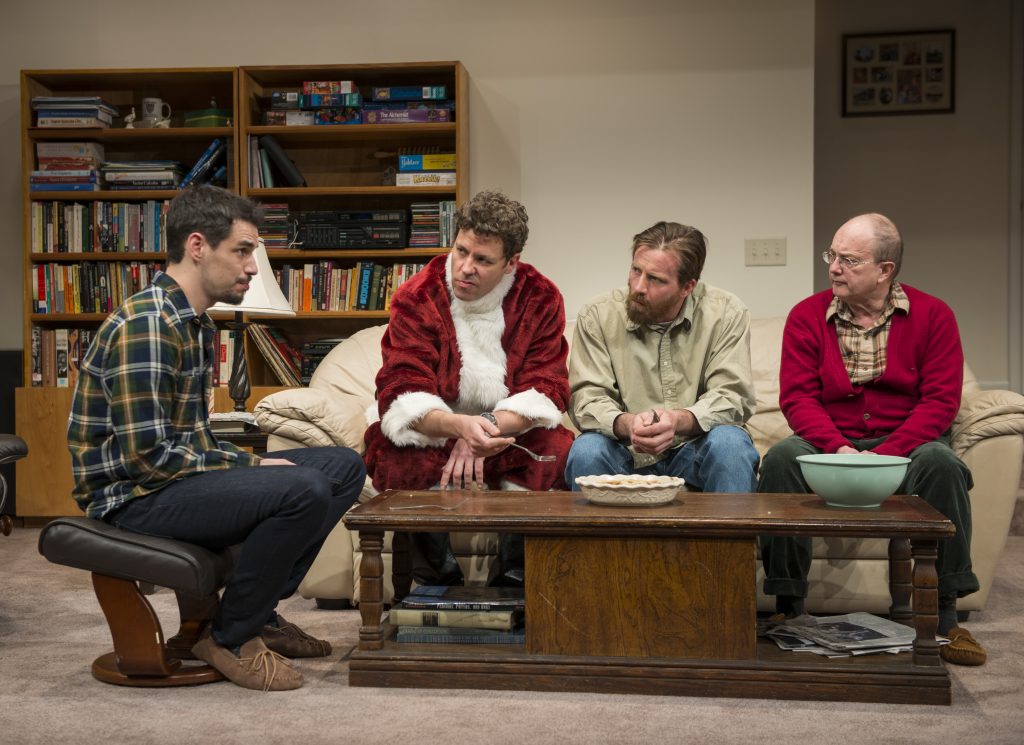 If you think the pre-show music is too loud when you enter the theater for Steppenwolf’s new production of “Straight White Men” from New York playwright Young Jean Lee—you are correct. The volume is intentional. As two gender-non-conforming performers, Elliott Jenetopulos and Will Wilhelm, explain when the play begins, how awful it must feel to be in a space that does not take your thoughts and feelings into account. (To be fair, they do have earplugs available.)

What makes “Straight White Men” so different from the hundreds (or thousands) of other plays about, well, straight white men, is that it treats its characters like subjects to be studied. To wit: before each scene, Jenetopulos and Wilhelm lead the actors onstage and pose them like department-store mannequins. Their reality is just as artificial as anyone else’s. Lee, who also directs, is not writing a play in which gender, race and sexual orientation are default settings. In fact, her attitude might best be described as “anthropological.” Though it is not without empathy.

“Straight White Men,” which Lee rewrote and revised for this production, revolves around a family gathering. It’s Christmastime and retired widower Ed (Alan Wilder) has his three sons home for Christmas. Well, he has two sons home for Christmas: Drew (Ryan Hallahan), a successful novelist, and Jake (Madison Dirks), a recently divorced banker. Ed’s third son, Matt (Brian Slaten)—once a fiery, brilliant activist out to save the world—has been living at home and working a temp job for a local nonprofit… for reasons that nobody quite seems to understand.

Even though these men communicate almost entirely through rough-housing and goofy games—like overgrown children—they’re still about as “woke” as they could possibly be. For instance, the boys were raised playing games like “Privilege,” a bastardized version of “Monopoly” where they are penalized for their whiteness/maleness/straightness. They understand the complicated, problematic role that they play in society. This play is concerned with something more slippery: straight white men who understand that they are, in so many ways, a burden to progress and are finding it difficult to live their lives accordingly. (Alex Huntsberger)