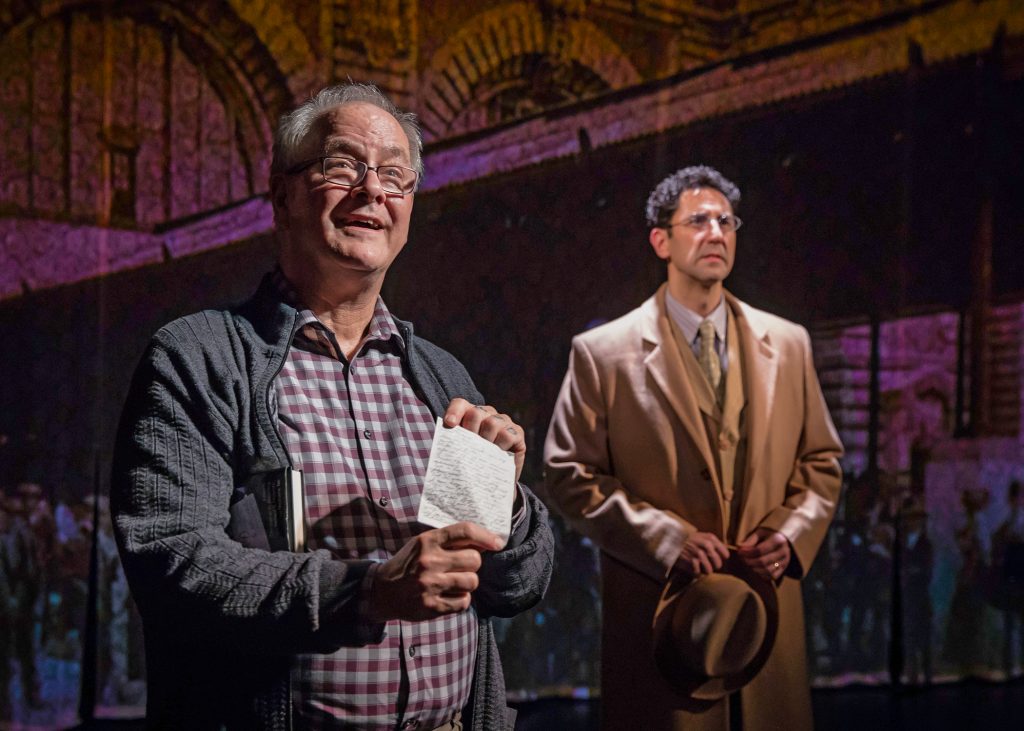 During the world premiere of Karen Hartman’s “The Book of Joseph” at Chicago Shakespeare Theater, I was reminded of Alain Resnais’ harrowing documentary “Night and Fog” about Nazi concentration camps. The film was released in 1956, just over a decade after the liberation of those camps, a subject that, at the time and for years to follow, was not widely discussed anywhere, especially in mainstream media. As a film, it is still celebrated for its occasionally brutal objectivity.

I also thought of a recent piece in Vulture that reappraised Alfonso Cuarón’s 2006 film “Children of Men.” The article presented the idea that, ten years after its release, the film had proved to be far more prescient than anyone could have imagined. Except of course for the director. In an interview for the piece, Cuarón argued that the very things his fictional film, set in the year 2027, were exposing were no more remote in 2006 than they are now.

At the risk of comparing apples to anvils, the travesties of the Holocaust—which ought to never be forgotten or minimized especially during a time when elevated instances of anti-Semitism are essentially being given the OK via cabinet appointments in the new president’s administration—lack the pressing immediacy of our current global refugee crisis. And while “The Book of Joseph” hints at a broader immigrant story, it ultimately settles for the specificity of a Jewish perspective, one that is so round and impersonal it is as if it were designed to stroke as many heartstrings as possible.

“Joseph” is based on “Every Day Lasts a Year,” the collection of letters published by Richard Hollander (played here by Francis Guinan) chronicling the correspondences between his father (Sean Fortunato) and his family in occupied Poland during the years of Nazi occupation. Hartman’s artistic flourishes flirt with self awareness: the presentational, fourth-wall-breaking shtick of Guinan; the brief interrogation of the story’s palatability and tendencies toward “stock footage” (a salient but underexplored concept); an occasional bit of easy, self-congratulatory satire. The opening scene gives some indication of personality. Yet a family divided by pettiness quickly gives way to a solemn insistence on heroism and noble suffering. While the play eventually comes to doubt itself, it is not nearly enough to be convincing. The cast dutifully performs the poetry of the letters. Yet Barbara Gaines’ direction is often stilted in such a way as to dull the impact of those essential words.

What is perhaps most disappointing about Hartman’s play is that, after decades of widely disseminated pop-culture representations of the Holocaust (from “Schindler’s List” to “Inglourious Basterds”) “Joseph” seems uninterested in telling a specific story, defaulting to archetypes and melodrama. And while Hollywood has always had a vested interest in the business of moving audiences (literally and figuratively), one hopes for more from the theater. Taken in contrast to “The Diary of Anne Frank” at Writers Theatre, “Joseph” is thin and wanting.

The American people during the middle part of the twentieth century may have been able to claim ignorance about the horrific extent of the Holocaust—after all, Resnais’ film was one of the earliest documents and it was not widely seen outside of Europe. We on the other hand do not have that same excuse. In our interconnected world, the images of the current crisis are inescapable. In comparison to the Holocaust, which now serves as an iconic symbol that has been used to deliver a variety of potent and powerful themes and messages, the stories of those currently fleeing war-torn regions has yet to be similarly codified. Instead, there is a possibility for compassionate, incisive and defining portrayals at a time when they are most needed.

Like those whose humanity was slowly reduced until they were rendered as little more than numbers, the victims of our current crisis cannot afford for us to wait. While it may soothe our conscience to imagine an aged immigrant sitting on their lawn offering us forgiveness (as in the resolution of “Joseph”), we haven’t earned it and neither has this play. We desperately need art that reflects the urgency of the now rather than the tragedies of the past, especially when they are maudlin and lacking in substantive insight.

It would seem that Cuarón, a Mexican director who would go on to direct the internationally successful film “Gravity,” knew that in order to tell an immigrant story in 2006 that would reach a wider audience he had to do so through the lens of whiteness in order to make its terrifying vision more palatable. For the theatergoing audience, this should not be unfamiliar. Stories that touch on religious radicalism, a quality most frequently associated with Islam (the dominant religion of the current wave of refugees seeking the promises intoned on the Statue of Liberty), are more often told through a white lens even when they feature non-white voices.

If theaters like CST are interested in cultivating vital (rather than simply “new”) work and not just playing it safe with their base, they should throw resources behind underrepresented perspectives. Because “The Book of Joseph” could have just has easily been “The Book of Adnan.” And that could have made all the difference. (Kevin Greene)