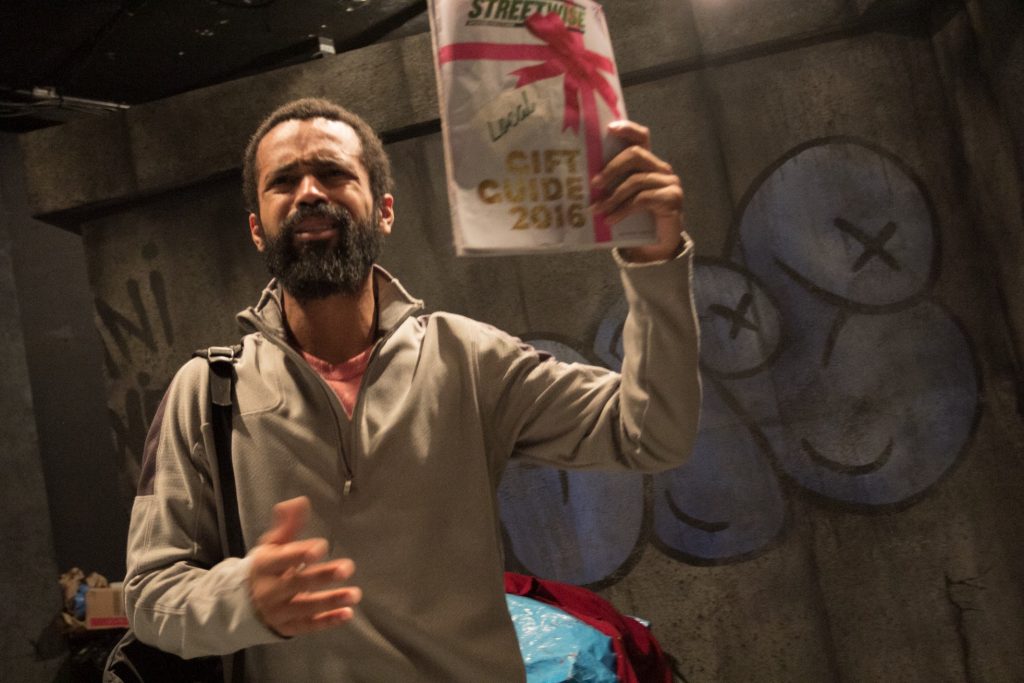 Homelessness is center stage in the world premiere of “Hobo King,” written by Javon Johnson and presented by Congo Square Theatre. But not in an exploitative, outsider sense. You know the type of story: Someone sees a tragic issue passing by, feels pity and scribbles what they believe to be true. No authenticity. No dignity for the characters in the story. No real investment in the lives or struggles of the subjects. Just a simple savior complex that believes by writing said story, they are doing the subject and the world a favor.

“Hobo King” is the antithesis of that sort of drive-by writing. Johnson is not concerned with pity. Nor is he interested in being the savior of the homeless community about which he writes. Truth, dignity and triumph, no matter how small, is the driving force instead. “Hobo King” follows the lives of a homeless community consisting of Freda (Velma Austin), Slim (Edgar Sanchez), Blind Man (Lionel Gentle), Toothpick (Brian Keyes) and Preacher Man (Lyle Miller), picking up the pieces after one of their own, Lazy Boy (Kyle Smith), is brutally gunned down by the police.

Anthony Irons direction is fluid and impactful, weaving music and dance through Lazy Boy and the Spirits (played by Ann Delaney and Jake Ganzer). What is even more a marvel to behold is how Johnson gives each of the characters in this community their own moment to shine. Each actor ably steps into the light. It is in these moments that the faces on stage, which closely resemble the one’s we see on the street, are not simply entertainers, “crazy people,” beggars or any other stereotypes associated with the homeless but living breathing people who, like dandelions, are pushing through the cracks life has dealt them to reach the sun.

“Hobo King” is a story of pain and loss but most of all a story of hope. It’s a gentle reminder that trouble may come but it doesn’t last always. (Loy Webb)