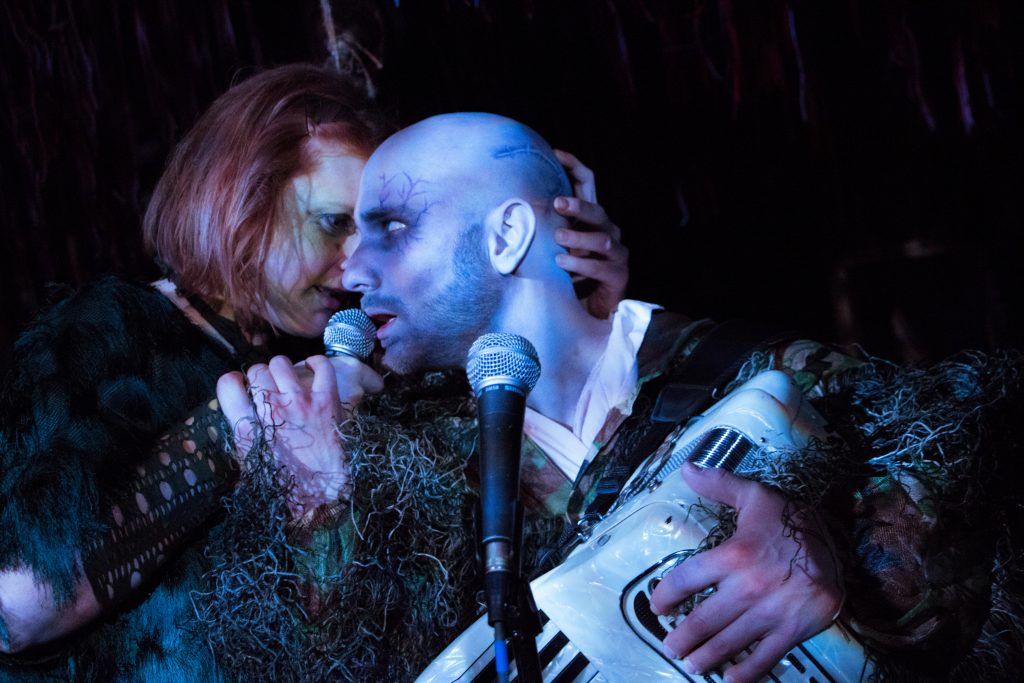 It’s hard not to be intimidated by Grendel’s Mother (Brenda Scott Wlazlo). Feathers in her hair and furious snarls volting through her body, she is fearsome and sensual. We’re all just cheeseburgers to her, she reminds us while staring us down hungrily. She knows that we believe she’s a Monster. That’s what we’ve called her for millennia and so she names herself one. She owns her wounds, even the open ones, like the torch she carries for Beowulf.

That is, the ferocious, fatuous and contemptible Beowulf (Pavi Proczko). Between them, the ever-present arm of Grendel and the all-seeing eye of Odin. And beer. And untold eras of fighting, blood and song. These two have been here. They will continue being here. They will never finish their battle.

The world built into director and writer Aaron Sawyer’s “Beowulf” feels claustrophobic and bound in time despite Grendel’s Mother’s pop references and Beowulf’s song-and-dance heroics on the open sea. Their unending antagonism and the close quarters create a real sense of risk with the threat dwelling in the shadows above.

Proczko and Wlazlo are champions. From the very moment Grendel’s Mother appears, Wlazlo is magnetic. She acts as a grounding point for the audience, both by virtue of her belief in the world she and Proczko so fully inhabit as well as the clarity with which she navigates her character’s emotional reality. Proczko is no less impressive. Beowulf’s mythical idealism is heroic and deplorable; his certainty in the cause is well-intentioned but doesn’t stand in our era of grey shades. The two flow seamlessly in their performance and their tragedy is wholly understood through powerful and well-thought performances.

But the script they’re working with is rough. Rules are poorly defined and the politics feel shoehorned and incomplete. Sawyer seems to be aware of a world outside of “Beowulf” and the necessity of stories that clarify and open this world to us but the play calls for progressivism and moral relativism without a footnote.

As a standalone story, it survives. As two actors working their craft, it’s a heroic act. (Jay Van Ort)