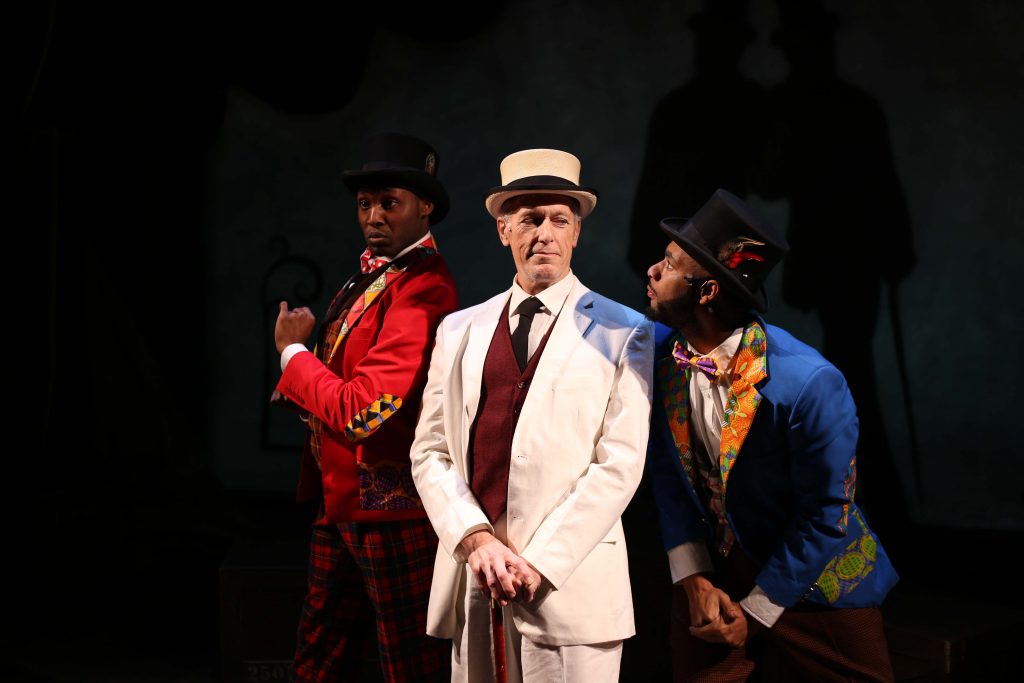 Just a few weeks ago it was revealed that in a 2008 interview Carolyn Bryant, the woman whose accusation of flirtation lead to the death by lynching of Emmett Till, had admitted that she lied about Till’s advances. The revelation comes more than fifty years after Till’s murder.

The admission has a double impact. First there is the lie, one with terrible consequences that can never be undone. The second is the proportionate punishment to the “crime” itself. In “The Scottsboro Boys,” a 2010 musical and the final collaboration between John Kander and Fred Ebb currently receiving its Chicago premiere at Porchlight Music Theatre, a character alludes to a truism as relevant today as it was in the height of the Jim Crow era: being black in America is a crime in and of itself and there seems to be no punishment too hefty to atone for it.

Performed in the style of a minstrel show, “The Scottsboro Boys” is an act of reclamation. Stock characters Mr. Bones (Denzel Tsopnang) and Mr. Tambo (Mark J.P. Hood) join nine “performers” each playing one of the Scottsboro boys. They are lead by an Interlocutor performed by Larry Yando, the only white actor in the show. Yando is pitch-perfect as the benevolent master who frames the glory days of the South through a lens of rural utopia, intentionally undermining the tragedy of the performance he is ostensibly in charge of telling. His performers, in turn, lay on the shtick though as the show progresses the “performance” gives way to the bleak truth of the story they’re telling. Kander and Ebb locate a deeply uncomfortable ironic contrast in their musical numbers: early on a pair of police officers sing an energetic tune to a thirteen-year-old about his impending death by electric chair.

Tonally, the musical lands in an uncomfortable gray area, as evidenced by its brief run on Broadway. Discomfort seems to be the objective, a noble, if not very financially fruitful, one. Still, there is pleasure in the performances. Of all the excellent voices, heard frequently in solo and in harmony, James Earl Jones II’s has the polish of Broadway. Stephen Allen (returning to Porchlight after his turn as Benny in “In The Heights”) and the young Cameron Goode bring all the glory of a Sunday morning with voices that stretch to the heavens before tumbling down gracefully to the reality of the god-fearing South. While the rest of the cast does an admirable job, Izaiah Harris seems to be the only one with true mastery of Breon Arzell’s nimble choreography, which ranges from tap to stomp.

“The Scottsboro Boys” is not perfect. The distinction between performance and story can be blurry, especially when it comes to Larry Yando’s shifting shades of oppression. And while the show’s irony is usually very clear, the presence of a religious moral clause (don’t lie because bad things happen to liars) is left largely unchecked despite the show’s tendencies to present hypocrisy and injustice baldly. The presence of a white savior (and a Jewish one at that) is turned slightly on its head though the lack of exploration into the necessity of such a figure feels like a concession to the troubled Yankee conscience.

In 2013, the Alabama parole board issued pardons for the three Scottsboro boys who had not already been pardoned or had their convictions overturned. The last of the nine died in 1989, nearly twenty-five years prior. The impact of “The Scottsboro Boys” lands like a heavy thud against the locked doors of oppression, in a place where the sun has still yet to shine on so many dreams. (Kevin Greene)