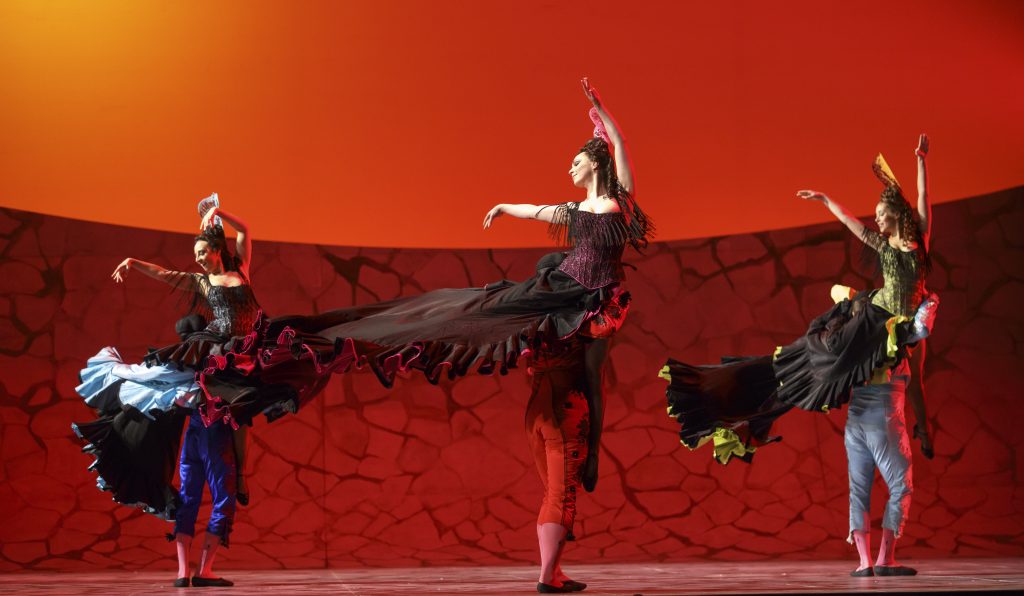 Director/choreographer Rob Ashford’s “Carmen” updates one of the most beloved operas of the canon to 1936-37 during the Spanish Civil War, turning bandits into revolutionaries and trading flowing skirts and flagrant bosoms for straight-lined sheath dresses. Ashford takes his inspiration from Picasso’s “Guernica” and his design team answers with jagged flats and plenty of black and grey.

As is the case with any major opera house, Lyric programs “Carmen” with audience-expected regularity, and if they never re-think it, we can easily start to listen from one familiar tune to the next, losing sight of the story which drives them. And if a production’s reimagining isn’t to a particular person’s taste, they are at the very least jogged into their own psychological study of the characters and their motivations. Art isn’t created merely to soothe: art, at the highest level, is intellectually and emotionally interactive.

Conductor Harry Bicket keeps the orchestral support and commentary crisp and bright (when not foreboding) and Ashford’s dancers are always an athletic delight. No doubt in answer to Picasso, Donald Holder’s lighting seems crafted to assist the audience in viewing the piece through a gauze of graphite, which, while satisfyingly atmospheric, makes it difficult at times to make out the principal’s facial expressions. Julie Weiss’ costumes, undoubtedly authentic to the period, give us the second Lyric production in a row with dresses that flattered almost no one; “Carmen” without the flounce and the bounce.

Ekaterina Gubanova sings Carmen with a smoky sparkle that continuously delights. I have never enjoyed the insistent vibrato of Joseph Calleja (Don José) but a worldwide audience continues to disagree. Christian Van Horn delivers an Escamillo with a sizeable virility and Eleonora Buratto (Micaëla) is just right, her voluptuous voice easily soaring to a top graced with the finest filigree of copper.

The cast, by their design or by Ashford’s, repeatedly made startling choices and Ashford made several directorial departures that left my head shaking. Which meant my brain was completely engaged. (Aaron Hunt)