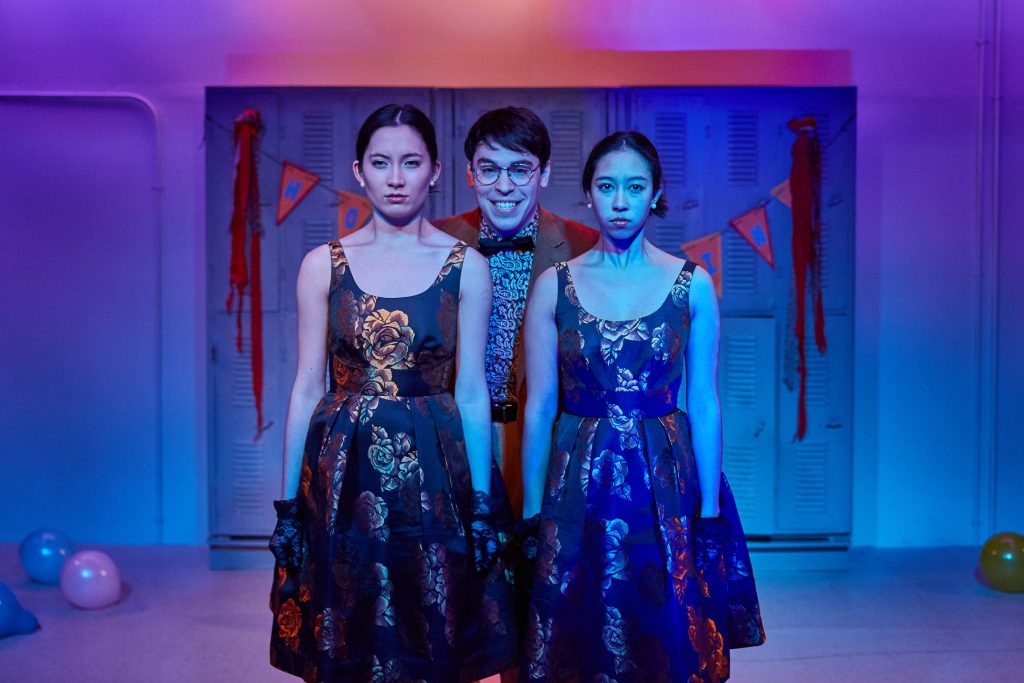 Sharp. Clean. Primped tight. Matching shoes, socks, checked skirts, jackets and backpacks. Twins M and L (Aurora Adachi-Winter and Caroline Chu, respectively) are the cream of the crop and they know it. And as college admissions roll on past, so too are they passed over by their top school, deferred in favor of D (Jesse Massaro) for a heritage he has little connection to. They’re pissed off. And everybody is pushing M’s buttons: her boyfriend (W. Matt Daniels) has little sympathy and the Dirty Girl (Amanda Fink) blows smoke, prophecies and slurs in her face. What’s a pair of girls to do?

“Peerless” is one-of-a-kind. Not necessarily in its plot (“Heathers” meets “Macbeth” veering in grimness toward the latter though laced through with bubblegum humor), but in its structure and the economy with which the story is told. Exposition is scarce (with the exception of D’s long monologues) and the story isn’t revealed in sentences but images and implications: an admissions envelope delivered from the heavens or a feather set on fire. Quotes from Macbeth sit on the tip of your tongue and the skittering of rats hums through the rafters.

Standing tall with a tough and taut script is Hutch Pimentel’s direction and his cast. Adachi-Winter and Chu keep the show running with terrifying pace and intensity. M’s fate as the Macbeth analogue is obvious but one you hope she’ll be able to dodge. Chu’s L is cruel and near sociopathic in her love of M. Despite its dysfunction, their deep bond guides the show. Their echoes of “you and me” or “you then me” are as affectionate as they are unnerving. On the other end, Massaro’s work as an optimistic white nerd pushing past a lifetime of depression is both cringe-inducing, sweet and tragic.

Circling all this action is the uncomfortable question: what does our identity afford us?

“Peerless” doesn’t have an answer. But it poses the question in a lucid, terrifying vision of need, greed, love and guilt. (Jay Van Ort)