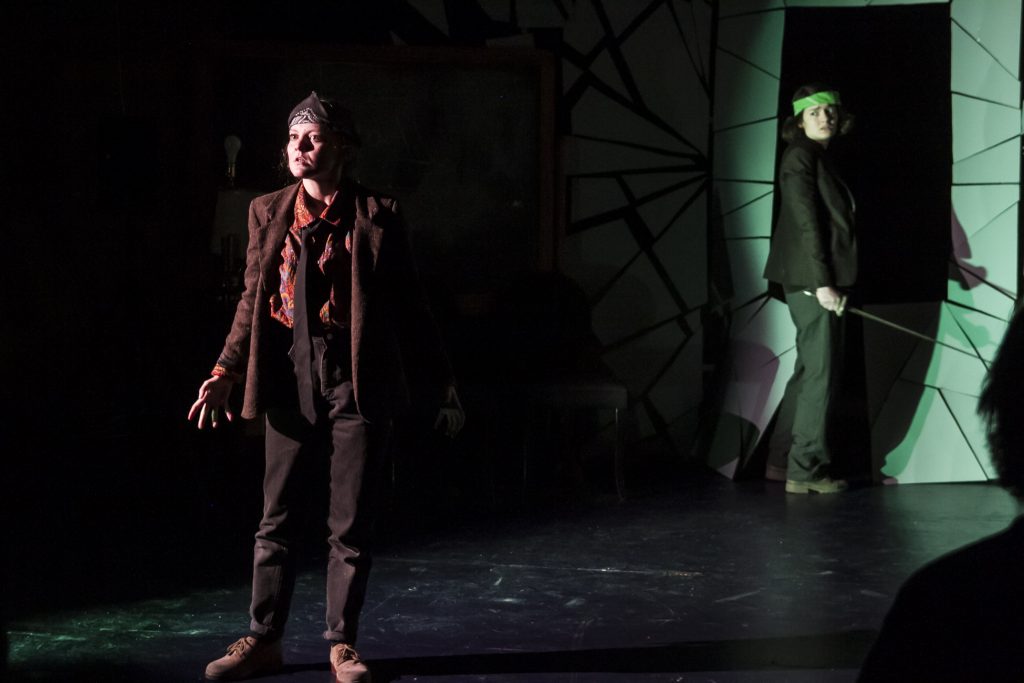 What’s that theater trope? A bunch of white people sitting around a table evading their troubles over dinner?

“Goddamn Geniuses” is like that but more self-critical. Immediately calling attention to the cliche, Nick Hassebrock (playing a version of himself) in his inter-dimensional Hell Chair offers a frame of reference both juvenile (he’s a pot-smoking suburban basement burnout) and honest about the social hierarchy in the theater.

Nick vanishes into the ether. In his place, five scientists (famous ones and also Paul Dirac) are having dinner, talking about science as well as their intellectual and spiritual dominion over the common folk. After thirty minutes or so of whisky tumblers and bloviating as well as Niels Bohr (Lauren Thompson) trying to tell a French joke about Belgians, Nick breaks through from the twenty-first century and grants them all bandanas.

Action. Eighties movies, stupid sci-fi action. The rest of the show isn’t interested in condescending women or beautiful, elegant theorems about the physical world and the nature of God. It’s about putting on a bandana and doing something, anything to stop what’s happening. It’s not charming and even with women cast as male scientists, the bicep-curling, testosterone-induced fantasy has the BO of a power trip that any boy who’s ever seen an action movie has wanted to run and gun with. It can be too much (the sound design is particularly overwhelming) and the politics don’t twine in any clear way but there’s value in telling folks to get over themselves and just do something.

At the same time, the masculinity and commentary in the show is almost benign; the violence is cartoonish and plays second fiddle to a camp sensibility. The infantile jokes are often well-placed enough to elicit a laugh. And when they’re not, they’re at least sincere enough to get a smile. Thompson is a highlight both as a bad-ass gunslinger and the fidgety, excitable Bohr.

“Goddamn Geniuses” needs more character development but it is ultimately about turning off your brain and letting your instincts take over. (Jay Van Ort)

Runaways Lab Theatre at Voice of the City, 3429 West Diversey, runawayslab.org. $17. Through March 5.