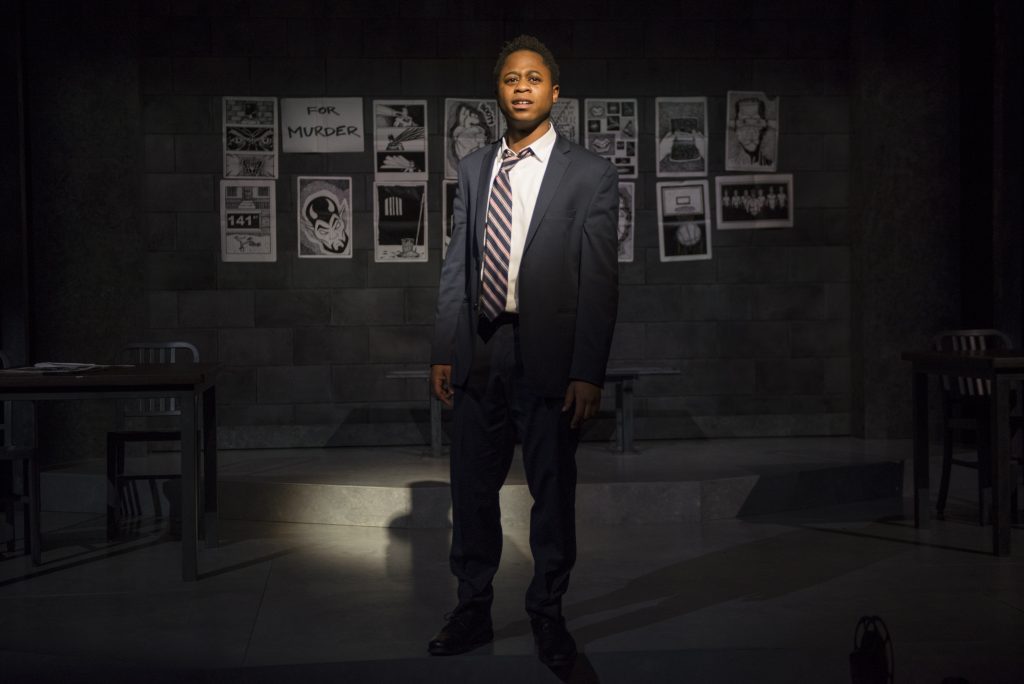 “You’re young, you’re black and you’re on trial—what else do they need to know?” snaps the lawyer to her client, a sixteen-year-old boy on trial for felony murder. The boy is named Steve Harmon. Steve has two nice parents and a little brother. He’s an aspiring filmmaker. He plans to go to college. When he asks his lawyer (Cheryl Graeff) how she came to be defending him, she replies dispassionately, “You get on a path and follow it.” Like “you do the crime, you do the time,” it’s one of many aphoristic remarks in “Monster,” adapted from Walter Dean Myers’ novel by Aaron Carter, a new play that adopts the courtroom drama’s old trope of guilt and innocence to show that these judgments are neither binary nor binding.

Narrated by Steve (Daniel Kyri), “Monster” illustrates the tension of a boy whose life hangs in the balance of others’ perception of him. The trial distills the question but for Steve the struggle is ongoing, from anxiously seeking the approval of a teacher (Chris Rickett) who finds him talented to living up to the machismo of the toughs in his neighborhood who tell him, “You don’t need intelligence to get paid. All you need is the heart.”

“Doesn’t justice mean the punishment fits the crime?” asks one inmate. “There are all sorts of ways of being guilty,” says another. “We lie to ourselves here. Maybe we’re here because we lie to ourselves,” notes Steve, who can’t quite reconcile his hope that he is not a bad person to the reality that a casual drugstore stickup of which he was an arguably nonviolent participant could result in a man’s death.

Though the action of the play rests in the excellent work of the ensemble, in which each actor seamlessly metamorphoses from neighborhood punk to lawyer to member of the family, executing synchronized donning of orange jumpsuits and swapping postures and dialects with finesse, the showmanship of the courtroom is a front for Steve’s internal, unresolved struggle with his own identity. “I want to look at myself a thousand times to find one true image,” he says. (Irene Hsiao)