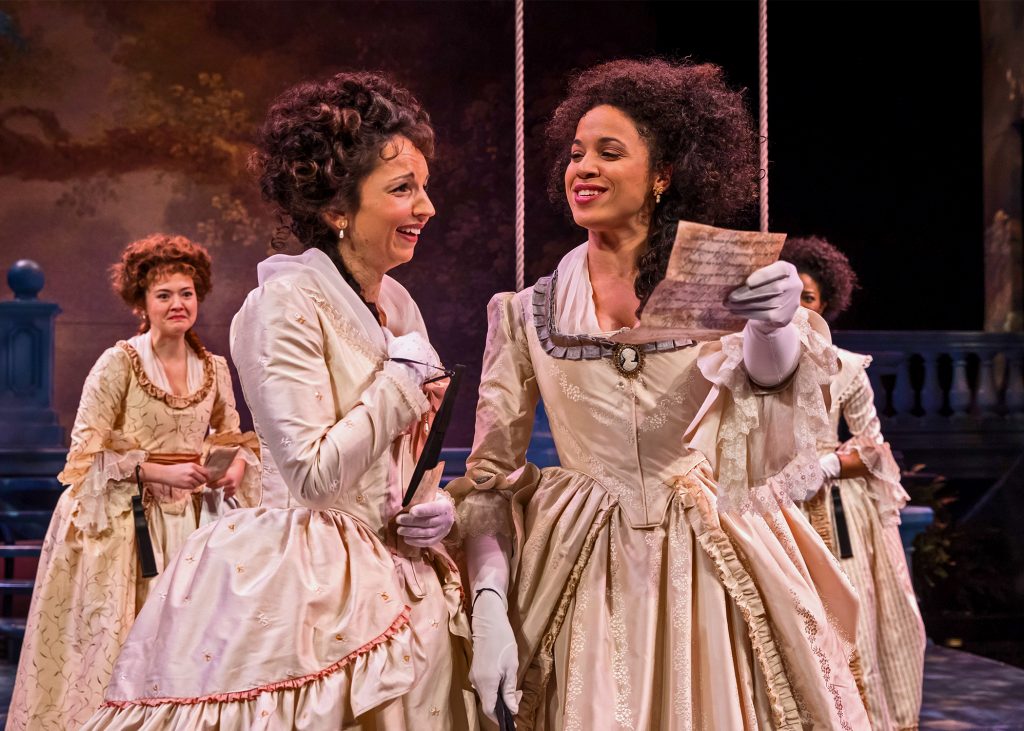 Guest director Marti Maraden’s production of Shakespeare’s melancholic quasi-comedy is as pretty as a picture. Kevin Depinet’s rococo set, complete with retractable swing and leafy mural-like backdrop, brings us inside a Fragonard painting of flirting nymphs and eager swains. The illusion is rendered even more exquisite by Greg Hofmann’s tender, mood-attuned lighting.

Unfortunately, the picture never quite springs to life. The show remains inert and distant, feeling more like a series of wordy, lengthy set pieces than an energized and cohesive whole. By the final curtain, when the romantic buildup collapses into what may be Shakespeare’s biggest anticlimax, the disappointment is tempered by a certain relief.

It’s not all the director’s fault. Low on plot and character development but bulging with meta-dramatic theatrics and self-reflexive satire, “Love’s Labor’s Lost” works better on page than stage. The slow-developing storyline concerns the youthful king of Navarre and his three courtiers, who vow to live a monastically bookish existence for three years. No sooner is the pledge signed than a comely French princess appears, accompanied by—surprise!—three nubile retainers. Tout de suite, all oaths are out the window, as the studious aristocrats are transformed into prankish, lovesick puppy dogs. The ladies respond with bemused indulgence, realizing that much seasoning is required to turn these dilettantes into husband material.

And that’s about it. The play ends on the bluest of notes, as the ladies head back home and a chorus of commoners sings a tuneless song about cuckoldry and domestic drudgery.

This being Shakespeare, there are gems scattered throughout, including Berowne’s sublime soliloquy on the ascetic life as “flat treason ’gainst the kingly state of youth.” But the play as a whole, like the male protagonists, is a patchwork, with many characters and situations coming off as thin borrowings from his more inspired plays.

Nate Burger merits praise as the erratically brilliant Berowne and Jennie Greenberry gives us a dignified Princess of France, who plays chess to the checkers of the wooing King Ferdinand (John Tufts). However, the verbal fencing—much of it rhymed—lacks the underlying affection and sexual tension of the Benedick and Beatrice exchanges in “Much Ado About Nothing.” Love doesn’t get more labored than this. (Hugh Iglarsh)