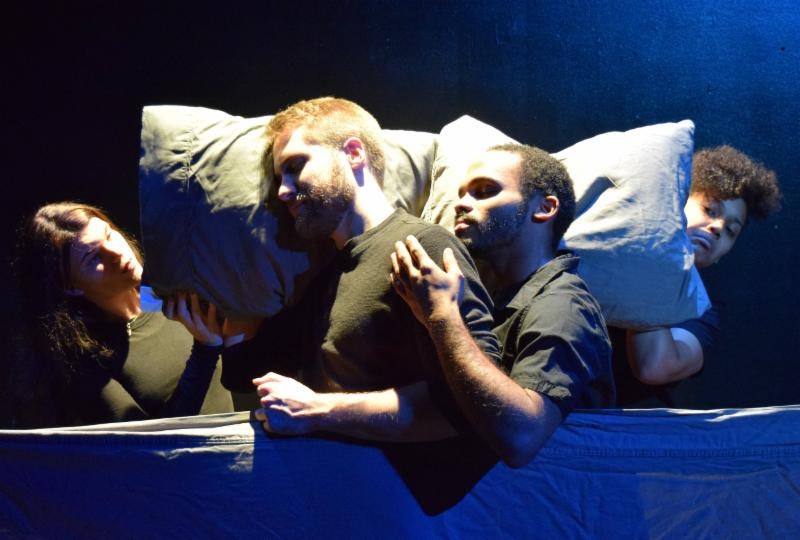 “Never Mind, It’s Nothing,” Chicago Slam Works’ Valentine’s Day farce, has such a cynical view of love that it’s hard to enjoy. Despite its sex-positive attitude and small-dose appreciation for committed relationships, the show rings through with bitterness as its central story (a Mardi Gras-themed divorce party) makes clear.

But as the show scrambles back and forth between scenes of that disastrous anti-celebration and relationship-oriented poetry, it still orbits a structure that’s not there. The divorce party isn’t as entertaining as the poems but the poems are only bites. On a whole, this can make it difficult to watch sometimes: the sketch comedy grab-bag is an ordeal and even with performers who are charismatic and perform their pieces with aplomb, it can be difficult to sit there not knowing what’s coming next.

The players do have some high points: Bianca Phipps’ Skype non-sex scene dissects the coldness of a long-distance relationship and the way folks find human intimacy in inhuman places. As an escort sex worker who goes home to a loving relationship, Felix Mayes’ character is one of the few optimistic takes on love as well as a tearing down of sex as a romantic ideal.

Other scenes include: a queer DMV where Teagan Walsh-Davis waits and wonders about whether she deserves her “membership.” There’s also Joseph Ramski listing the objects his girlfriend leaves at his home. It’s mostly hair and a personal transformation from fear and discomfort to love and complacency.

The short of it is that there’s nothing bad happening here. But also nothing extraordinary. The scenery changes constantly so it’s never quite boring but it’s also never full-on entertaining. Phipps and Mayes do their best at moving through scenes and for their part they are on the ball. But the show never feels complete or fully satisfying. (Jay Van Ort)