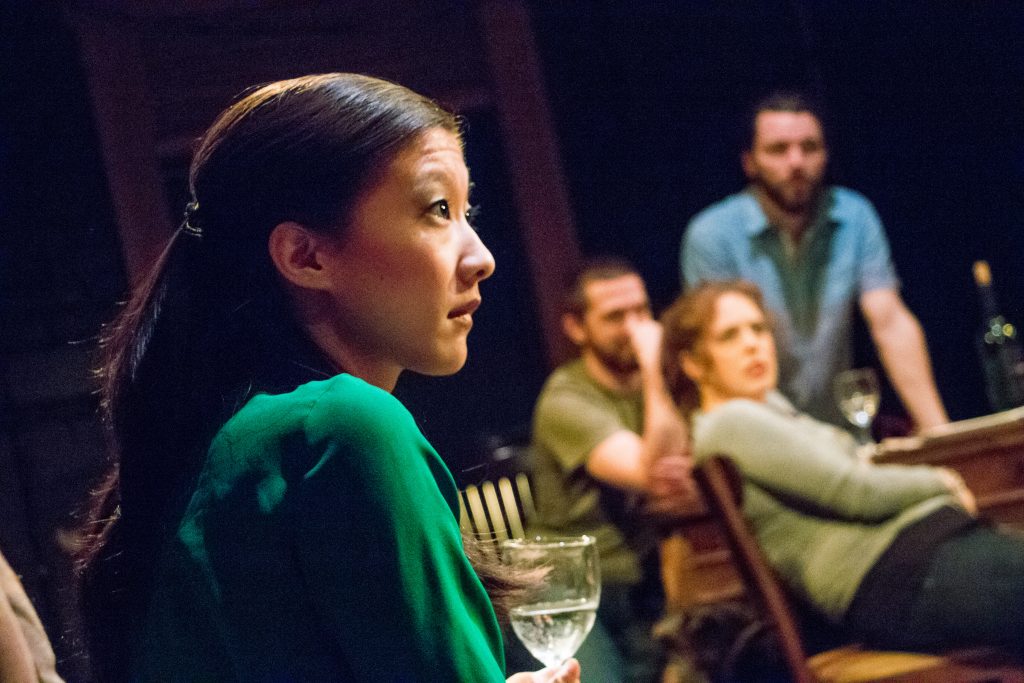 Real, honest-to-god naturalism in theater is so difficult to achieve that it’s no wonder many modern playwrights and young companies are shying away from it. The returns are too low and the risks are too high. But if Spenser Davis’ production of Michael Perlman’s “At The Table” proves anything, it’s that these kinds of plays and performances can still create the subtlest kind of magic—an enchanted mirror in which you see your whole world reflected. The year might be young but this production from Broken Nose Theatre is one of the best shows you’re likely to see in 2017.

The script itself is a familiar take: four well-off, liberal college buddies in their early thirties gather together with assorted friends and lovers at a lake home (owned, naturally, by someone’s parents) for a weekend of food, fun and drink, that devolves into a series of fights and recriminations. The problems the characters bring with them are a mix of personal and political—combined with an increasing awareness of how intermingled those two categories have become. Eventually, the play starts circling one conflict in particular: the relationship between Lauren (Echaka Agba), a black woman, and her closest friends, Elliott (David Weiss), Stuart (Evan Linder) and Nate (Adam Soule), who are all white men.

Unlike the work of Annie Baker or Samuel Hunter, two young playwrights who have made quiet realism their bread and butter, “At The Table” is louder, more free flowing and oftentimes quite raucous. The ample offerings of wine, whiskey and weed help. Rare are the moments where these characters suffer quietly—and when they do it is just a long prelude to an outburst. Agba, Linder and Weiss all give truly standout performances—but they are really just the top three among equals.

The brilliance here, from both Spenser and the cast, is in the details. It’s in capturing the way that a certain subset of person (youngish, liberal, well-intentioned) actually talk and act. There is an interiority to all the performances that is striking—people searching for what they’re trying to say as they say it and oftentimes coming up short. It’s like Chekhov for the smartphone generation. And it’s definitely a must-see. (Alex Huntsberger)