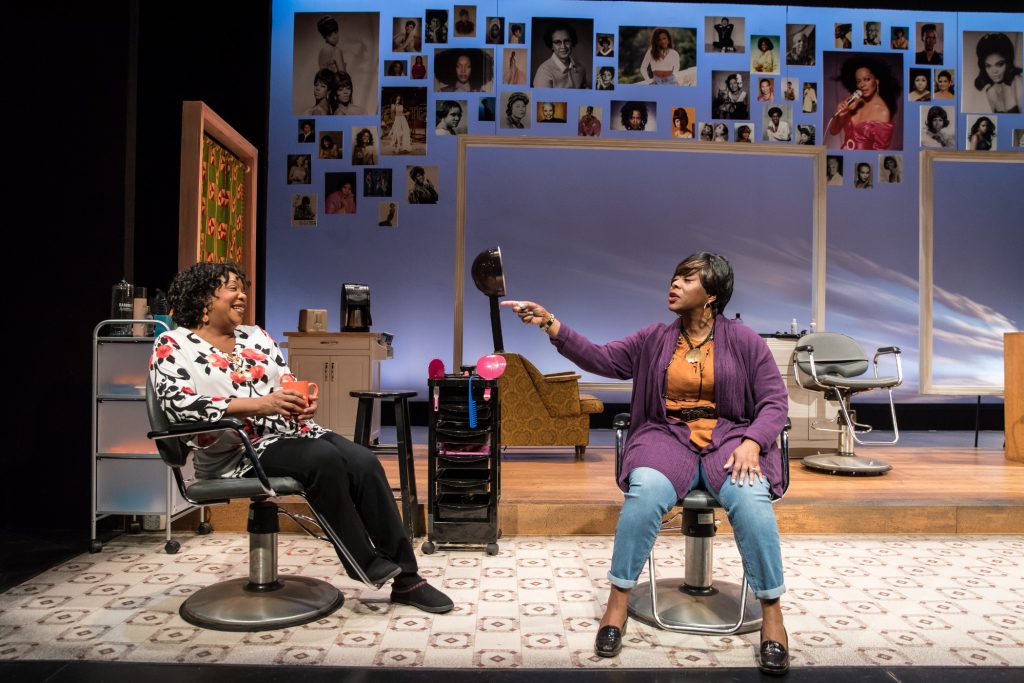 Within their venerable walls, Victory Gardens is currently offering two very different perspectives on being a person of color in America, specifically Chicago. Upstairs, Teatro Vista’s “The Wolf at the End of the Block” presents a morally ambiguous, razor-sharp drama that pulsates with the energy of the Here and the Now. Downstairs on the main stage, the world premiere of Marcus Gardley’s “A Wonder in My Soul,” directed by Chay Yew, rewinds the clock back to November 2008 as a nation prepared to greet its first black president while a small group of Chicagoans say goodbye to a life they fought hard to hold on to.

Concerning the lifelong friendship of Aberdeen Calumet (Greta Oglesby) and Bell Grand Lake (Jacqueline Williams) and featuring the trials and tribulations of Lake’s two children, Paulina (Donica Lynn) and Lafayette (Jeffery Owen Freelon, Jr.), as well as a preacher’s wife (Linda Bright Clay) and her assistant (Camille Robinson), “A Wonder in My Soul” is a day-in-the-life story that moves abruptly from palling around to dire straits with little to smooth over the difference in tones.

Gardley is exceptionally gifted at writing dialog that is natural yet engrossing. “Wonder” sparkles with wit and crackles with spirit. The problem lies in meshing these two planes together. The emotional heft of the play relies too heavily on exposition and flashback. There are character holes left entirely unexplained (for instance: Paulina’s disgust for her job as a police officer and desire to be a singer). The emotional energy is real and the portrait of camaraderie and kinship feels authentic, yet what “Wonder” lacks is tension.

Situated in a South Side beauty salon in a neighborhood on the verge of being swallowed by the forces of gentrification, Gardley taps into certain themes still quite prescient in 2017. Yet with its historical frame, his play feels a bit like chicken soup heavy on the noodles and light on the meat. And while I doubt many audiences will hold it against him—“Wonder” is delightfully entertaining and undeniably heartfelt—his play is nevertheless propped up dramatically.

Yew’s direction is a hodgepodge of styles best exemplified by the various ways he works in the play’s musical interludes. While some feel purely incidental others require switching to a level of suspension of disbelief usually reserved for musical theater. The talents of the ensemble are put to good use: Lynn’s extraordinary voice, Freelon, Jr.’s oratorical capabilities, Clay’s comic delivery. Oglesby and Williams carry the weight of the play’s sentimentality with seeming ease. Their skills are almost enough to transform the saccharine into something more soulful.

If “The Wolf at the End of the Block” is the play that we need, “A Wonder in My Soul” is more like the play we want. It is not untruthful, nor does it paint an overly rosy portrait of being a person of color in a country where history and culture (specifically black history and culture) are being replaced by chain coffee shops and luxury grocery stores. Still, it can feel like Gardley is making concessions to the truth of the present by reframing his play through the lens of communal hope that is, now more than ever, truly being put to the test. We live in a time that requires individuals to take action, which can sometimes be futile but are nevertheless vital even in their failure. Given the timing, “A Wonder in My Soul” feels like it sits down where perhaps it could have stood up. (Kevin Greene)