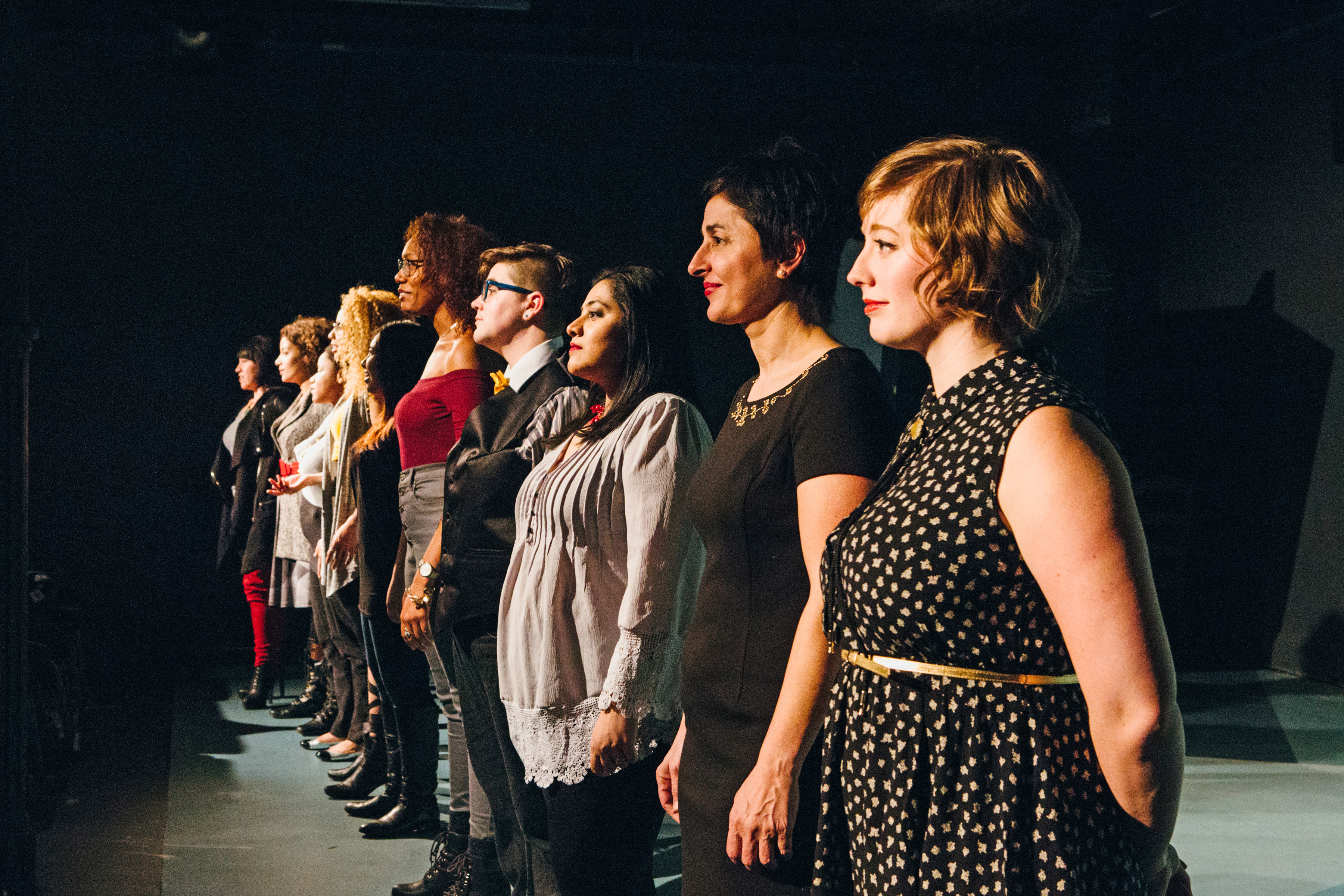 At the beginning of “Gender Breakdown” one of the cast members came into the audience and told me a story. She asked me to keep it secret and I am going to. But the story she told me is a secret only in its details. In its broadest strokes it is one of the most painfully visible truths of our culture, both nationally and in the very specific world of our city’s theater community. “Gender Breakdown” is a series of vignettes about the insidious effects of sexism, racism, sizeism and xenophobia on female-identified theater artists in Chicago. It is a distillation of so much pain as to be nearly unbearable to the empathetic heart and yet as a work of art it is buoyed by communal joy and a fearless approach to performance.

“Gender Breakdown” is unsparing in its aspersions. Seemingly no rock is left unturned even between cast members. One of the play’s best scenes featured Carolyn Sinon sounding off on being a dancer in a body that is rejected on the basis of the narrow standards of “beauty” in dance. Mia Vivens counters with the observation that while she fits the conventional body image of a dancer, as a woman of color she is only given roles that are “exotic.” She concludes by reminding audiences that black people are not waiting to be given their humanity and their soul by the powers that be. She also gets in a dig at white girls who can’t twerk but who can (and do) thoughtlessly appropriate black culture.

While “Gender Breakdown” will almost certainly be among the most moving works you’ll see this year, it also has a courageous sense of humor. Kate Hawbaker-Krohn hosts a game show where she reads actual casting-call listings and has her “contestants” take one step forward for each element that fits them (or that they can stomach). Want to play a doctor? Of course! Anything to get away from the stereotypical horny, messy best friend that nobody actually wants to have sex with. How about if the doctor is…topless! All ethnicities encouraged to apply! A collective groan goes out through the cast. Hawbaker-Krohn goes through over a dozen of these (to reiterate) actual casting calls before the rest of the ensemble gives up.

University theater programs and casting directors get their due as well for reinforcing the notion of “type,” that catchall word used for ensuring that black and brown faces remain off stage as companies continue to churn out classic plays full of pearly white faces. A later scene with an improvistory air gives a shoutout to Not In Our House, name drops one theater that was closed after the abuses of its artistic director were revealed, strongly hints at another and reflects on the positive momentum of the moment.

“Gender Breakdown” is unapologetically didactic but also self-aware enough to know that what works for each individual may not be the same. For instance, one actor might refuse a role that waters down their ethnic background or reinforces white-based othering. Yet another might take the gig, if at least in part to be in the room with the people who need to hear their voice. Intersectionality means celebrating difference and recognizing that a rising tide raises all ships.

At the show’s conclusion, the cast shares some truly troubling gender parity data from the 2015-2016 Chicago theater season, highlighting disparities in acting, directing and, in particular, writing, where there was a single digit percentage of plays produced that were written by women of color. Again, these are the highly visible secrets of an industry and a city that prides itself on being more diverse and inclusive than it actually is.

After the cast member told me her secret, I told her I was sorry. She in turn responded “You don’t need to apologize.” After the show, I was struck by the veiled simplicity of her response. Sympathy and empathy are important to have in your emotional tool belt but only if they’re being used in pursuit of change. We don’t need to apologize. We need to act. I recommend starting here and starting now. (Kevin Greene)