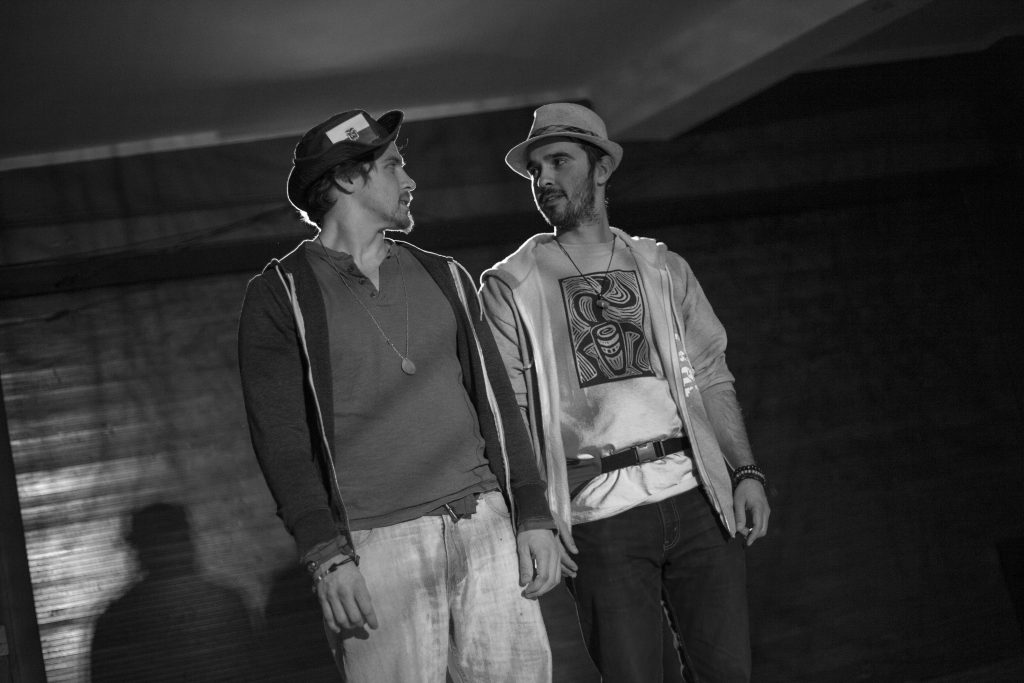 Samuel Beckett’s “Waiting for Godot” is a canvas upon which nearly anything—philosophy, emotion, dramatic pretext—can be projected. By that same token, it is a surface upon which very little successfully sticks. As illustrated by Tympanic Theatre Company’s all-Latinx production, you cannot simply plop a dusty fedora on its head or wrap an old sweatshirt around its shoulders and expect “Godot” to ring with contemporary and culturally specific resonance.

Performed in a church basement where the audience (seated on metal folding chairs, a bit of an ask for a nearly three hour-long production), is surrounded by sheets of opaque plastic, chain-link fence and piles of gray bricks with a “tree” made of rope, metal and wire writhing at center stage, Tympanic’s production is meant to evoke the U.S./Mexico border, a fitting if, again, elusive allusion. In some ways, the production, directed by Aaron Mays (who worked as assistant director on Court Theatre’s production two years ago), is on the right track in its identification of the parallel between the no-man’s land of Beckett’s play (where no one comes and no one leaves) with a real world region characterized in equal part by covert penetration and forcible expulsion.

Yet the play falters in its artistic hesitance: it reaches into absurdity, dabbles in melodrama and strains toward existential comedy but never commits fully enough for any individual risk to pay off or coalesce with the others into something resembling a coherent whole. It can feel at times like watching a person who has already decided that they cannot make the leap try to do it anyway: You can’t expect to be moved or even surprised by the shortcoming.

The production is not without fresh takes particularly from Felipe Carrasco, whose Estragon promises good things ahead for the young actor. As Lucky, Jordan Arredondo makes good use of his fifteen minutes of degrading fame. Christian Castro’s Pozzo is transfixing in his command of the stage. Unfortunately, Vladimir feels more like a character Christopher Acevedo wants to play as opposed to one he is capable of performing successfully.

While representation remains a vital topic in theater, quality and follow through cannot be overlooked. And this “Godot” is wanting for both. (Kevin Greene)