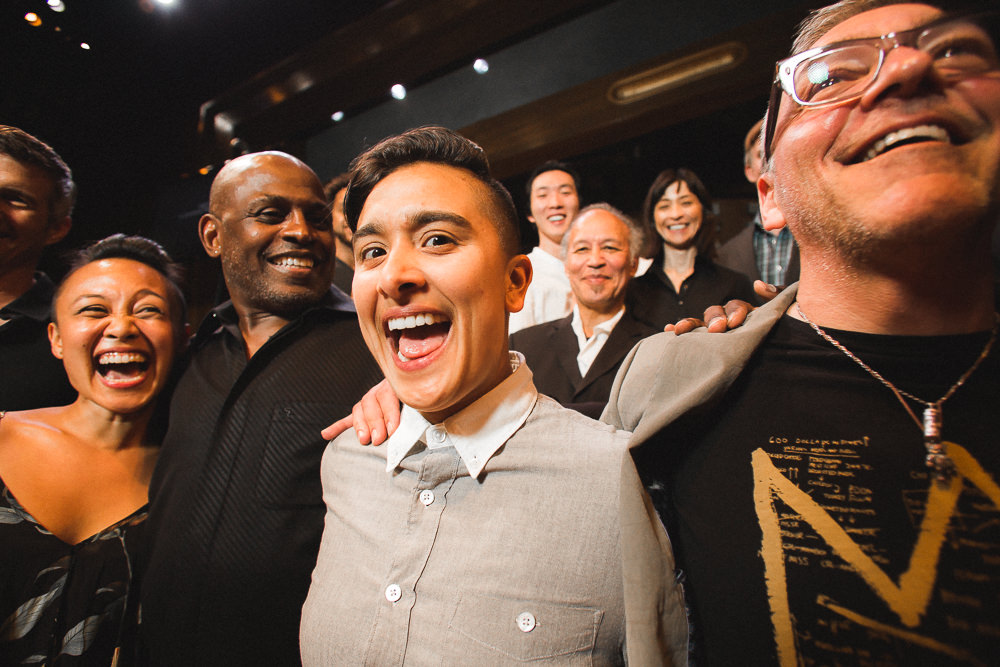 Two years ago, actress Emjoy Gavino, whose credits include roles at Court, Goodman, Steppenwolf, Remy Bumppo, Lookingglass and numerous other Chicago stages, was having a familiar grouse with her pals. They were sought-after actors, yet they were frustrated with the distinct lack of representation in the theater. As Gavino states bluntly, “There are truly good actors who have only been asked to play terrorists or people from Africa and that isn’t right.”

So Gavino pitched a gig. “Let’s do one reading and invite a whole bunch of industry people and show them we’re all playing things we should be playing, but it has nothing to do with what country we look like we’re from,” she recalls. “That sounded cheap!” Little did she know the event would whip up its own momentum to become the Chicago Inclusion Project, exploding in under two years from a one-time reading into a nonprofit organization that partners with theater companies to stage readings, advise on casting and host conversations about diversity within the theater community. “It is continuing to turn into something that the community seems to need,” she notes.

“We started as a group of actors who wanted to do readings of classic contemporary plays cast nontraditionally as a response to not being called in for those roles and not being able to see this on a regular basis.” Gavino and her friends started keeping a list of their dream plays. But it wasn’t until she became a casting director at The Gift Theatre that those dreams began to manifest. “I asked [Gift Theatre artistic director] Michael Patrick Thornton, because I knew if it was just a bunch of actors listing plays on a Google doc, nothing would ever happen. I was trying to bully Michael into making it happen and he said, ‘This all sounds great. I’m not going to do it for you, but I will help you.’”

Bolstered by Thornton’s confidence, Gavino selected William Saroyan’s Pulitzer Prize-winning “The Time of Your Life” and phoned Victory Gardens, where then-program manager Monty Cole introduced her to Chay Yew, who agreed to direct the reading. “‘Time of Your Life’ is about the American Dream. It’s set in the 1930s but there’s very little in the script about physical appearance or ethnicity, other than ‘this person is a dreamer’ or ‘this person is a dancer.’ It would be a giant ensemble cast, which is what Chicago is known for.” And Gavino gathered an ensemble Chicago loves to watch—not only Thornton but other Chicago theater luminaries, including Elana Elyce, Anish Jethmalani, Sandra Marquez and Behzad Dabu. “Half the cast were celebrities from different theater companies, from big houses, that you’d never seen onstage together before.”

But even as the work started to take shape, Gavino started to wonder whether one reading could be enough. “As donations started coming in from people who didn’t even have the money to be giving, we started to realize how important what we were doing was to the community,” she says. “I think people grabbed onto the idea that we were showing and not telling. We were paying actors, we were giving them jobs, we were giving them opportunities in front of future employers. Everybody in the collective emailed every director and casting person and artistic director they knew and we ended up getting 150 people to the reading, with fifty directors, artistic directors and casting people.”

The conversation that followed the reading galvanized a varied and powerful response. “In the last year and a half, I’ve met with about thirty casting people, directors and artistic directors. Everyone says they believe in inclusion but no one knows how to talk about it,” she says. In the coming year, Gavino wants to extend the conversation to designers, critics and other voices in the community. In the meantime, the Chicago Inclusion Project has presented work in collaboration with Writers Theatre and TimeLine Theatre. Recently they’ve worked with Back Room Shakespeare Project, partnered with Chicago Cultural Alliance to present pay-what-you-can or free readings in museums and consulted on casting for American Theater Company, The Hypocrites and Haven Theatre.

“It’s art as activism,” says Gavino. “I thought it was just going to be my friends doing readings but it feels really political and essential right now. The power of theater is that, as long as you have capable storytellers, you can make it whatever you want it to be. As an artist you have a responsibility to transform and transcend.”