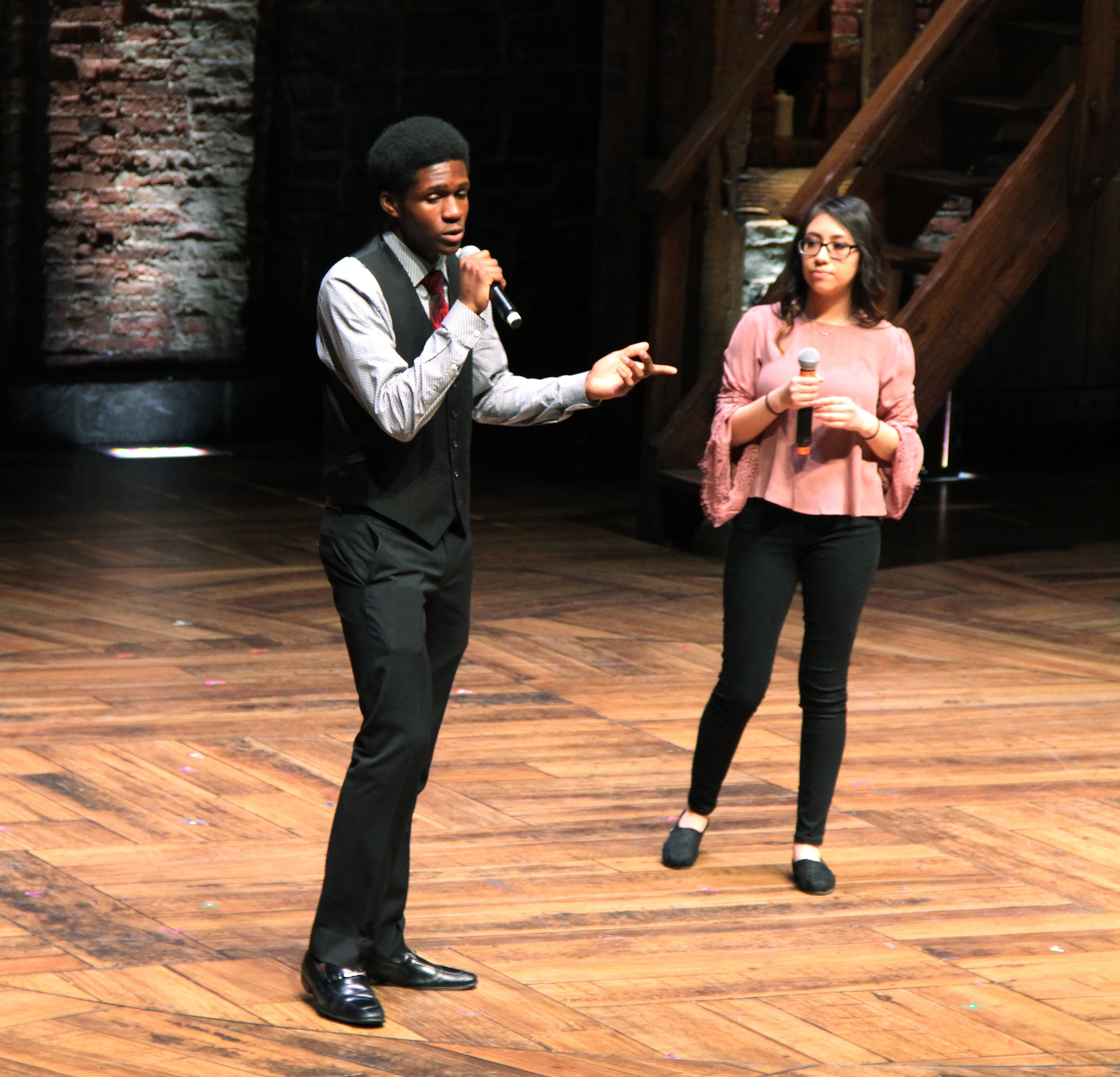 Oh to be a Chicago public high school student this year! Not only is there a possibility of the school year ending early—meaning kids might get an early summer break because of a CPS lawsuit against the state—but 20,000 students from across the city are also getting the opportunity to see the hottest show in town, “Hamilton,” as part of the education program that bears its founding father’s name.

As if that weren’t enough, about a dozen students get to take the PrivateBank Theatre stage before each of the ten student matinees (occurring between now and the end of 2017) to share their original pieces of performance art with their fellow students.

“Today was my first time performing in front of so many people,” says Esmeralda Huizar, a senior from Rickover Naval Academy in Edgewater. “I was really nervous.”

Huizar and her classmate Adewale Fatoba, a sophomore at Rickover, wrote and performed a hip-hop piece titled, “My Name’s James Madison.”

“Today I really felt like I had a chance to prove myself and that’s why I really tried on it and I think I did my best,” Fatoba adds. “As soon as we started rapping, [people] kept clapping and at the end it was like really alive, like everyone was so joyful and happy about it. I had the support of my friends, family and teachers. They really helped me through all of it. It was really fun.”

Both Fatoba and Huizar are currently in a U.S. History class at their school taught by Meghan Taylor. The Gilder Lehrman Institute of American History, one of the Hamilton Education Program partners, provides educators with materials to present the program to their students and gives them a rubric to rate the creative projects on historic integrity, research and artistic expression. Projects can be songs, raps, poems, scenes or monologues. Taylor reviewed the work of all her students and was able to submit two pieces for consideration. Fatoba and Huizar’s piece was ultimately one of the twelve selected for the student matinee.

“I really like teaching through projects,” says Taylor. “All of the kids listen to rap. So to be able to play rap songs about the Founding Fathers to them, they were like, ‘This is dope! This is great!’ So it really made it so much easier to really draw them in and engage in the material.”

The Hamilton Education Program began in 2015 as a collaboration between “Hamilton” producer Jeffrey Seller, the show’s creator Lin-Manuel Miranda, the Rockefeller Foundation, New York City Department of Education and the Gilder Lehrman Institute of American History to provide twenty thousand New York City Title I public school students with the chance to see the Broadway production. Tickets for the Chicago performance range from $62 to $497 at face value. The cost of a matinee ticket for these students is $10, which also includes a brown-bag lunch.

Though the tickets are deeply discounted, even $10 can be tough for some kids to come by. Taylor’s students were able to cover the cost of their tickets by holding fundraisers at their school.

Dr. Stefan Fisher is a counselor at Perspectives Leadership Academy, a charter school in the city’s Auburn Gresham neighborhood. He’s been a counselor for ten years and believes that arts opportunities like the Hamilton Education Program enrich students’ lives and encourage them to stay in school.

“It is a wonderful opportunity to expose our students to different forms of art that they typically don’t get a chance to see,” says Fisher. “It’s an opportunity to come downtown, see professionals working at their craft and also to get a piece of history. It’s just an all-around great experience for them.”

While some students had seen live theater before, for others this was the first time they left their neighborhoods to come see a show.

After the student performances, select “Hamilton” cast members participate in a question and answer session with the students, answering fun questions about favorite foods as well as imparting words of wisdom.

Though not all of the students who attended the matinee are planning to pursue the arts professionally, many felt the experience was rewarding.

“It felt special to me,” reveals Huizar, who thinks she might want to become a pediatric nurse in the future. “Once we got there, everyone treated us like we were something big, like it was important for us.”

“It was really breathtaking,” notes Fatoba, who said he would be excited to perform and collaborate with Huizar again in the future. “It’s something I’ll remember for the rest of my life and I really want to say thank you for that.”