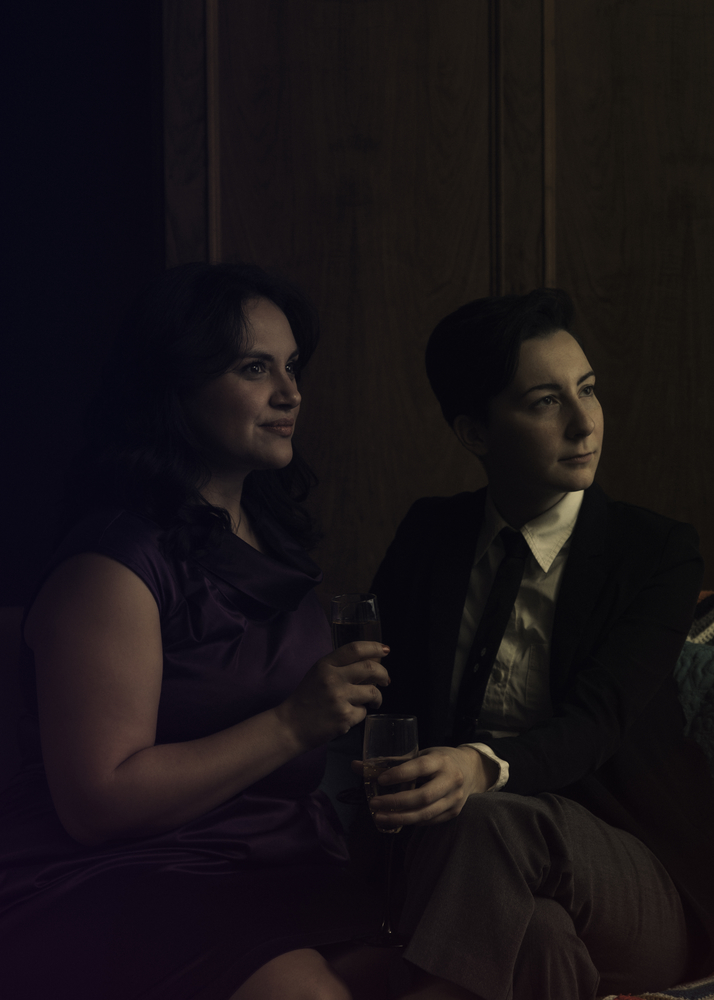 Sarah Gubbins’ “The Kid Thing” is about the kid thing and more: what does it take to be happy? And what does it mean to bring a child into a less-than-perfect world?

Nothing is ever good enough for the workaholic Darcy (a snaky, snobby Shalyn Welch) except maybe another glass of whiskey. And when the unstoppable force that is Leigh (Samantha Michelle Nava) meets the immovable object that is her girlfriend, nothing good can come of it.

See, Leigh wants a kid and when their gay friends Margot (Taylor Raye) and Nate (Anna Rose li-Epstein) share their own big news, there’s no way to avoid the issue: Darcy doesn’t. As deceptions come to light and fights break out, Darcy dances around the issue, working extra hours and obfuscating all attempts to penetrate her guard. She can’t just tell Leigh “No.”

“The Kid Thing” is Nothing Without A Company’s first staging of a published work. What’s exciting is how readily they’ve navigated the complexity of this couch drama: they’ve exposed the emotional core with apparent ease and teased out strong characters from a script that could be played at a superficial level.

Shalyn Welch’s portrayal of Darcy is obnoxiously charming and pitiful. Raye’s confidence and comfort onstage is powerful; her silence speaks and when she talks, she takes over the room. li-Epstein is perhaps the most undersold, in a role that exists only to counter Darcy as a butch femme on another end of happiness, which is a shame since li-Epstein’s work is the only light spot in the play aside from the collective sperm donor (Gabriel Fries).

The weakness though arises from how unlikable the two central characters are: Darcy’s flippant, smart-ass justifications are equal parts entertaining and wearing while Leigh’s enthusiasm borders on mania. It’s difficult to see how the pair could ever like each other, much less love each other.

Ultimately, we don’t suffer much from it: there’s room to care for them and understand the cruel place they’ve learned to inhabit. (Jay Van Ort)

Nothing Without A Company at Berger Park Cultural Center, 6205 North Sheridan, nothingwithoutacompany.org, $20. Through April 15.