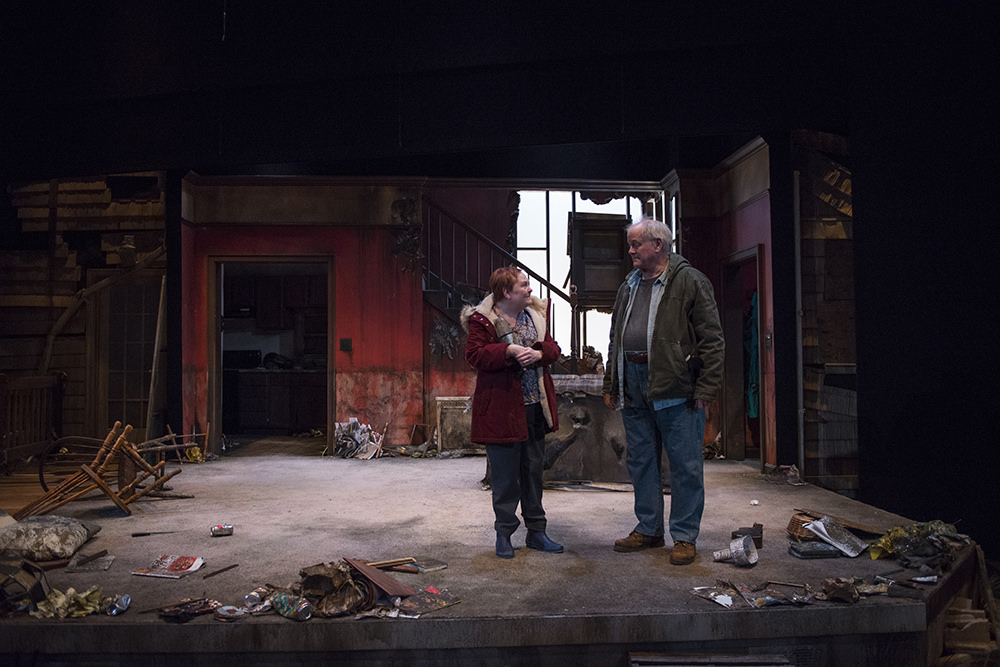 It says something about the Murphy family that Hurricane Sandy, which has just laid waste their cozy home and tight-knit Staten Island neighborhood, is almost the least of their problems. The 2012 storm has swept away more than walls and furnishings. It has also wrecked the family’s façade of cheerful normalcy, forcing the senior Murphys and their two adult sons to confront the lies, betrayals and disappointments that surround them like the rubble of Jeffrey Kmiec’s convincingly post-apocalyptic set.

Sharyn Rothstein’s 2014 family drama examines what happens the day after the cataclysm, when a community must make the painful decision whether to rebuild or move on. For patriarch Marty Murphy, the choice is even more fraught than for others due to his own nature as a neighborhood guy, his checkered past and the secrets he keeps.

Marty is a big-hearted fellow with a larcenous streak. The same could be said of this work, which glows with affection for its everyman protagonists but borrows shamelessly in terms of structure, setting and, to some extent, theme from “Death of a Salesman.” Marty is a barely updated Willy Loman, a marginal figure who impersonates a man of substance and character for the benefit of a devoted, long-suffering wife and two sons, one of whom swallows dad’s shtick while the other does not. “By the Water” is “Death of a Salesman” with flood damage and a happy ending, a concept that perhaps could only have been envisaged by a TV writer like Rothstein.

Director Cody Estle, aided by a topnotch cast, gives this D-for-derivative play an A+ staging. Francis Guinan is a charismatic, larger-than-life Marty. Penny Slusher, with her Edith Bunker voice and manner, is well cast as the docile helpmeet who learns to stand her ground. Joel Reitsma excels as younger brother Brian, a royal screw-up who doubts his ability to go straight especially with Marty as role model.

As family wounds heal and love blooms among the ruins between Brian and his once and future flame Emily (a vivacious Amanda Drinkall), Hurricane Sandy begins to seem like the best thing that ever happened to the Murphys. The scenario might not be realistic but the message that wisdom and growth can emerge from disaster sounds awfully reassuring at the moment. (Hugh Iglarsh)