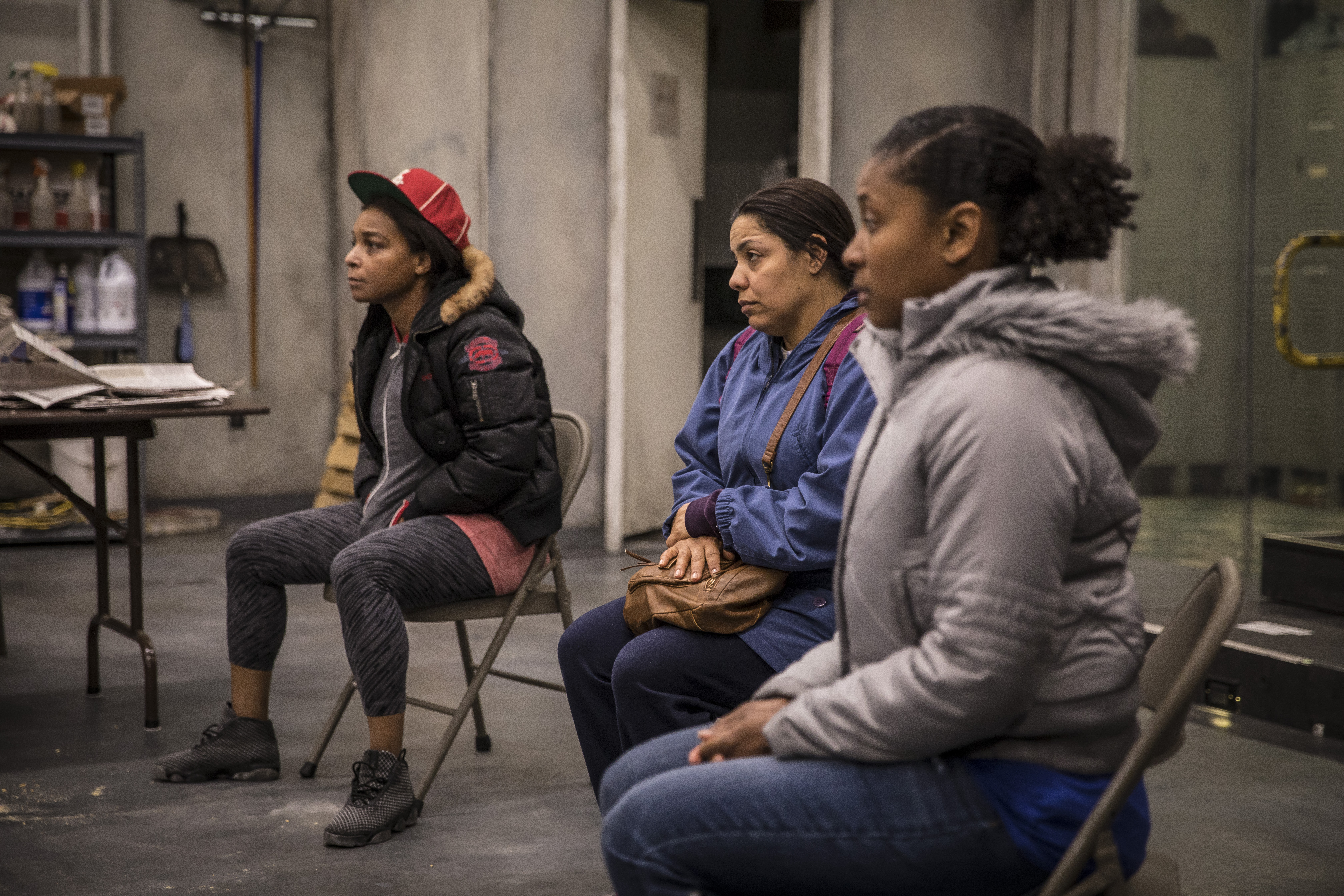 What’s the poorest you’ve ever been? While the majority of us (although by no means all) will have experienced lean times in our lives, our various safety nets (savings, investments, education, skin color, parents and relatives) have shielded many of us from the prison of poverty. And what do we make of those who occupy that largely invisible realm? Sadly, following the misleading mythos of self-made autonomy, poverty is viewed by many as beginning and ending with its victims.

Alexander Zeldin’s “Beyond Caring” presents the subjects of his play, temporary workers employed on a two-week contract to clean a factory, without judgment or pity. His play is a moral one though it is not about the dignity of the poor or the nobility of their suffering. It is instead about harsh realities presented in an unblinking production at Lookingglass.

Zeldin (who also directs) presents a vision of poverty that is by and large unadorned. The play begins (and presents much of its action) with house lights up. They work in tandem with the over-bright fluorescents above the stage so that the ingrained filth of the set (as well as our implied complicity in the action we witness) is unavoidable. And yet there are times when the light (designed by Daniel Ostling) slices across the set with Rembrandt-like elegance.

This oil-and-water mixture of beauty and brutality is mirrored in the action of the play, frequently presented in relentless realism though occasionally bursting into moments of arresting expression as when Tracy (J. Nicole Brooks), recently deprived of the opportunity to visit her child, provokes the attention of the taciturn Phil (Edwin Lee Gibson) through music that eventually explodes over the loudspeakers as the light shifts to blood red, her inner anguish boldly externalized.

As far as workplace dramas go, “Beyond Caring” makes “The Flick” look positively romantic. The indignities here are small but all the more affecting because of them, as best exemplified by the employees being offered coffee from a machine they have to pay for that also occasionally takes their money and produces no beverage. The employees individually find solace (or more likely escape) in fiction, music or religion. Yet these efforts are in vain in the shadow of a system in which they are viewed as being entirely disposable.

They are led (or rather instructed unhelpfully) by a delusional manager, Ian (Keith D. Gallagher), who is terrifying in his inability to recognize his privilege (he is white, his employees are not, though it doesn’t matter since he claims to be “color blind”) and internalized rage. Coupled with his delicate pride (and fragile masculinity), Ian is an easy enough poster boy for the more systemic issues at the heart of “Beyond Caring” but to label him as the antagonist would be to simplify the more complex socio-economic issues driving the play.

There is a nagging and distressing question underlying “Beyond Caring,” one so often present in art that unveils some new layer of human depravity: what, as the audience of this fiction, do we do with it? We applaud its bravery and artistic merits. We consider our awareness raised. Those in a position to give do so in accordance to their perceived means. And that’s all well and good for Alexander Zeldin, Lookingglass and those involved in the production. But in some respects “Beyond Caring” let’s us off the hook too easily, the medium eventually overwhelming the message. Guilt is largely an ineffective motivating factor in capitalism, the rules of which theater is not immune to. But perhaps, given the real villain of this show, that is precisely the point. (Kevin Greene)