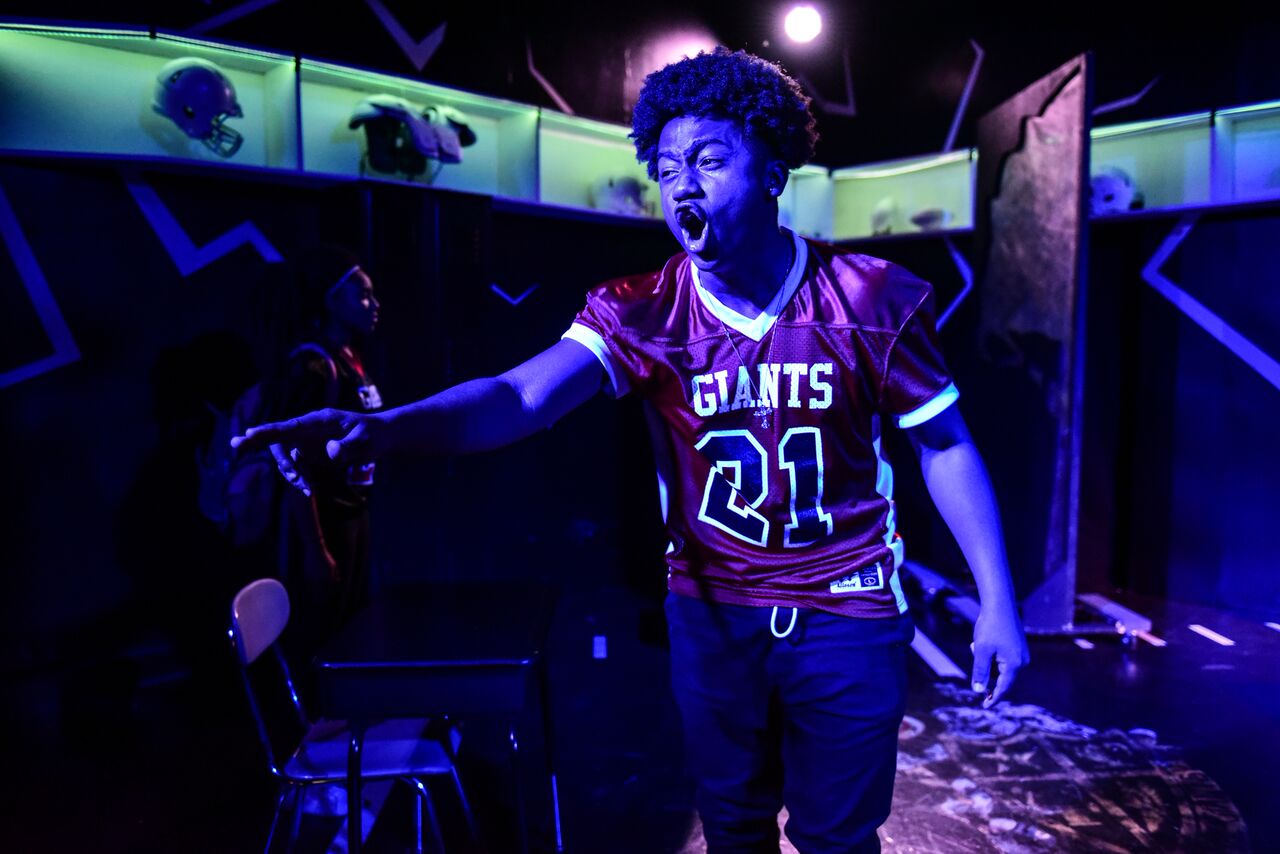 Dominique Morisseau’s “Blood at the Root” is the most socially complex work The Yard (in their second collaboration with Jackalope Theatre) has yet to do. And that’s saying something for a company that has tackled suicide, pregnancy, death, illness, polygamy and genocide as well as religious, racial and sexual intolerance all through the lens of adolescence and young adulthood. A perfect fit for the young company, Morisseau has clearly not forgotten what it actually feels like to be a teeanger: the angst atop the insight, the pain alongside the pride. That these characters are clumsy and awkward does not preclude their ability to be passionate and truthful. Their mess, in this context, reflects the mess of their environment: the “dirty south” and, more broadly, this problematic nation we call America.

Based on the true story of the “Jena Six,” “Blood at the Root” follows the paths of six high-school students, each outside the lines and “in the cracks” in their own respective ways. It begins with Raelynn (the indomitable Ireon Roach) deciding that today, in the name of disrupting apathy, is the day she defies convention. Her school, situated in Louisiana, has never had a black student president and she is fixing to do something about that. An act of defiance sets off a series of increasingly racially charged incidents culminating in the alleged assault of a white transfer student, Colin (Brian Baren), by several black students including Raelynn’s brother DeAndre (Victor Musoni).

In and around these actions are revealing exchanges between Raelynn and her friend Asha (Danielle Chmieiewki), whose admiration for black culture is usurped by her own white fragility when it becomes more convenient for her to view a hate crime as a prank. Elsewhere a diligent young editor, Justin (Tevion Lanier), and his enthusiastic (and maybe a tad abrasive) reporter, Toria (Jenna Makkawy), debate the purpose of journalism at a time when so much is on the line. Goaded into an emotional eruption, Lanier delivers a moving monologue about not belonging to either side of the racial divide. “Weak n—-! But never MY n—-!” he exclaims, illuminating the play’s  complex intersectional web, each fine line crossed, stuck and bound up with all the rest.

Co-directed by Will Kiley and The Yard co-founder Joel Ewing, this production embodies The Yard’s characteristic resourcefulness. Minimally staged, the performance is punctuated by group chants and step (coached by Mykele Callicut and KiKi Layne), the latter becoming a means of expressing literally unspeakable emotion as the play churns forward. Elsewhere, rap is employed in a striking performance from Musoni who breaks down as DeAndre chastises himself for being a young black man who forgot “The Rules,” a modern update on Jim Crow that skips the mess of lynching and goes straight to elimination by the authority of the state.

“Blood at the Root” gets a happy ending with an asterisk and in some ways that is the best the characters of this play, particularly the black characters, can hope for. Morisseau is a realist in her outlook; it is no coincidence that both DeAndre and Colin are banking on a prosperous career as a professional athlete in order to escape the realities they were born into. A play that challenges the “us versus them” mentality that has been increasingly dominant in our socio-political landscape, “Blood at the Root” points to the places where that mentality breaks down but also recognizes its insidious power to transform and take shape anew. After all, if there is blood at the root is there not also blood in the leaves?

At a lean eighty-five minutes, “Blood at the Root” is a seriously demanding work emotionally, physically and mentally. It bears pointing out that young people involved in this production can’t even legally take a drink. Not because of any insufficiencies in performance but because of the maturity and professionalism with which the entire production is conducted, an extension of The Yard’s founding principle of producing work that is “by young people, for young people.” Where other working actors have day jobs, these performers have homework and yet they are no less qualified because of it. The energy, enthusiasm and understanding they bring to this work is of a grade beyond measure. (Kevin Greene)

The Yard and Jackalope Theatre at The Frontier, 1106 West Thorndale, the-yard.org or jackalopetheatre.org, $10-$20. Through May 6.